The Arkadelphia Micropolitan Statistical Area includes all of Clark County. 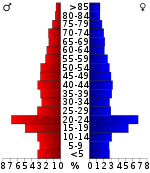 Note: Unlike most Arkansas counties, Clark County only has one single township. That township encompasses the entire county.

Townships in Arkansas are the divisions of a county. Each township includes unincorporated areas and some may have incorporated towns or cities within part of their space. Townships have limited purposes in modern times. However, the US Census does list Arkansas population based on townships (often referred to as "minor civil divisions"). Townships are also of value for historical purposes in terms of genealogical research. Each town or city is within one or more townships in an Arkansas county based on census maps. The townships of Clark County are listed below with the town(s) and/or city that are fully or partially inside them listed in parentheses. [8][9]

Clark County was Arkansas' third county, formed on December 15, 1818, alongside Hempstead and Pulaski counties. The county is named after William Clark who at the time was Governor of the Missouri Territory, which included present-day Arkansas. Arkadelphia was named as the county seat in 1842.

Clark County was very active in its support of the Confederacy during the Civil War, both in its maintaining an arsenal to manufacture arms, as well as large numbers of Clark County men going off to serve in the army. At the outbreak of the war, in May, 1861, the artillery battery, 2nd Arkansas Light Artillery, was organized for service in the Confederate Army. Recruited for and organized in Arkadelphia by local watch maker Franklin Roberts, who would serve as the battery's captain, the battery would later be commanded by Captain Jannedens H. Wiggins, and would see considerable action while under the command of General Nathan Bedford Forrest. Of the more than 160 men who served in the battery, most of whom were from Clark County, only 11 remained at the time of its surrender on April 19, 1865, the rest having been killed, wounded or captured.

Most of the men of Clark County served in "B Company", commanded by county residents Captain Charles S. Stark, 1st Lieutenant George W. McIntosh, and 2nd Lieutenants Frederick M. Greene and William E. Lindsey. Two Clark County men, both serving in "B Company", were awarded the Confederate Medal of Honor. Both medals were awarded for bravery in action during the Battle of Chickamauga. They were Lieutenant Andrew J. Pitner, who was killed in action and whose medal was posthumous, and Private Charles Trickett, who survived the battle, dying in 1939. The regiment was with the Army of Tennessee when it surrendered in Greensboro, North Carolina on April 26, 1865.[10]

The Confederacy employed the use of numerous arsenals during the war. One of those was located in Arkadelphia. That arsenal manufactured large quantities of ammunition and rifles, as well as a newer version of previous muzzle loaded rifles. This newer version of rifle, called the "Arkadelphia Rifle", came toward the end of the war, and was initially believed to be superior to previous versions. However, in its limited use, it proved to be no more reliable than any previous versions, and in some cases was reported to be insufficient. One of these "Arkadelphia Rifle"s is on display at the Civil War Museum in Washington, Arkansas.[11] There were numerous pro-Confederate guerrilla bands operating in Clark County, but short of minor skirmishes, one of which is registered with the National Register of Historic Places, there were no major military actions in Clark County. The closest that Union forces came to Clark County was during Major General Frederick Steele's Camden Expedition.[12]

Following the war, the economy was devastated, as was most of the south. From 1859 through 1868 the county had been home to a school for the blind, one of the few education centers to remain open during the war. In 1873 the Cairo and Fulton railroad line connected Arkadelphia and Little Rock. This helped to generate the economy, and bolster the logging industry, eventually leading to Graysonia, Arkansas becoming a thriving mill town, along with the towns of Amity and Gurdon who also became dependent on the logging industry. In 1889, James H. Abraham was appointed Sheriff by Arkansas Governor Simon Pollard Hughes, Jr., following the death of former Sheriff Joseph Hulsey. Abraham would hold that position through regular election for the next 25 years, the longest sheriffs term in Clark County history. It would be Abraham who investigated and ultimately arrested Benjamin Standford for the 1893 murder of Hans Sellars, despite Standford's claim of self defense.[13] Of the five men who were sentenced to death in Clark County that actually had their death sentences carried out, four would be during Abraham's tenure, and the fifth during the year of his death.[14]

Education was segregated during this period, with two colleges (Arkadelphia Methodist College and Ouachita Baptist College) opening for white people, and two schools (Bethel AME and Presbyterian Industrial School) opening for African-Americans. Segregation would become a problem in Clark County during the early and mid-20th century. Racial tensions in Clark County would build over the years following the end of the Civil War, with one African-American man being lynched in Arkadelphia on October 7, 1900.[15] Eventually the tensions resulted in riots in the Arkadelphia schools during 1968.

On December 18, 1914 Arthur Hodges became the first person in Clark County to be executed by use of the electric chair. Prior to that, the primary way of execution was either by hanging or firing squad. It was the 314th documented execution in Arkansas history, the fourth by electrocution. He was executed for the 1913 murder of Clark County Constable Morgan Garner. The execution was the subject of an article by The Kansas City Star entitled "Eight to die in Arkansas", making reference to eight men being executed in Arkansas over a sixteen day period. Although Clark County has sentenced many to death in its history, only five, including Hodges, were executed, four for the crime of murder and one for the crime of rape. The other four were Louie McBryde, Willis Green, Anderson Mitchell, and Daniel Jones, the latter three being hanged together on March 15, 1889, for the murder of local preacher Arthur Horton. These statistics do not include lynchings, which were not common in 19th century Clark County, nor does it include firing squad executions committed during the Civil War era.

Clark County Constable Morgan Garner was the second police officer in a two year time frame to be killed in Clark County, the other being the 1912 murder of Gurdon Town Marshall I.Y. Nash. Nash was killed by his own deputy, Sam Arnott, after the two became involved in an argument which escalated into a physical altercation, which resulted in a brief shootout during which Nash was shot twice and killed. That altercation was a result of Marshal Nash demanding the resignation of Arnott. Both murders took place during Sheriff Abraham's tenure as sheriff.[16][17]

Great Depression and after

The discovery of cinnabar in the foothills of the Ouachita Mountains, mostly south of Amity, sparked the 1931 Quicksilver Rush. This sparked a boost in employment opportunities, which was badly needed due to the Great Depression. However, it was short-lived, as cinnabar became more readily accessible from other sources. By 1940 any significant mining had ended. However, with the outbreak of World War II, large numbers of Clark County men went off to the military for service.

In 1966, wealthy businesswoman and philanthropist Jane Ross and her mother Esther Clark Ross founded the "Ross Foundation", a foundation concentrating primarily on educational assistance. To date that organization has contributed in excess of $10,000,000 to local charities and educational programs, in addition to other projects. In 1972 she also helped found the "Clark County Historical Association". The county has thirty seven locations listed with the National Register of Historic Places, to include its county Court House, "Magnolia Manor", and the "Capt. Charles C. Henderson House". Arkansas Highway 67 was a main highway leading through Clark County, bolstering hotels and businesses along that route. In the mid-1960s I-30 was completed, dooming the small businesses who were by that time dependent on the constant Hwy. 67 traffic. However, with the interstate came other business, and the city of Arkadelphia began to thrive. DeGray Lake was completed by 1972, giving the county a small tourist industry in that realm.[18]

Tornado disaster of 1997 and after

On March 1, 1997, a tornado in the F-4 category ripped through Clark County in a north eastern direction, causing major damage to much of the county, including heavy damage to the downtown portion of Arkadelphia. The tornado also heavily damaged other parts of the state. By later media accounts, Arkadelphia was the hardest hit that day.[19] The event was on such a scale that it prompted a visit and tour by US President Bill Clinton on March 4, 1997. That one tornado resulted in 6 people being killed and 113 injured in Clark County alone, with 25 deaths statewide. The local police and fire departments were commended for their quick response during and immediately following the tornado, and the Arkansas Army National Guard were deployed to assist in preventing looting and evacuate victims. The disaster prompted a recovery program that assisted with housing and medical support, with the American Red Cross and press agencies from across the country converging on the county seat.[20][21][22][23]

The county formed the "2025 Commission", responsible for planning and organizing the recovery efforts. The commission included state Senator Percy Malone, who was later credited with having been a driving force behind the recovery efforts. A 40 block area of Arkadelphia had been destroyed, better than 60% of the downtown area alone, along with property damage totalling in the millions of dollars county wide.[24] Within a decade, the county and city of Arkadelphia were commended for their recovery efforts, having repaired or rebuilt almost every building affected by the storm, and with the downtown portion of Arkadelphia thriving beyond its former success.[25] Due to the tornado of March 1, 1997, Arkadelphia was the first community in Arkansas to participate in the "Project Impact" initiative of the Federal Emergency Management Agency (FEMA). Arkadelphia installed shatter proof windows in all its schools, purchased a 10-kilowatt generator, improved its drainage systems to help prevent flooding, and designed and built a "safe building" capable of holding 900 people at the Peake Elementary School.[26]