Cleveland County is a county located in the U.S. state of Arkansas. Its population was 8,689 at the 2010 U.S. census. It is included in the Pine Bluff, Arkansas Metropolitan Statistical Area. The county seat is at Rison.

The Arkansas legislature established Dorsey County as Arkansas's 71st county on April 17, 1873, naming it for Stephen W. Dorsey, the U.S. Senator from Arkansas. When he was indicted for defrauding the Post Office, they renamed it on March 5, 1885, for Grover Cleveland, the newly elected President of the United States. 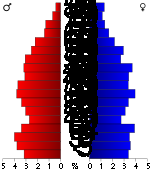 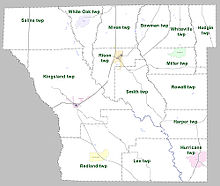 Townships in Cleveland County, Arkansas as of 2010

Townships in Arkansas are the divisions of a county. Each township includes unincorporated areas and some may have incorporated towns or cities within part of their space. Townships have limited purposes in modern times. However, the US Census does list Arkansas population based on townships (often referred to as "minor civil divisions"). Townships are also of value for historical purposes in terms of genealogical research. Each town or city is within one or more townships in an Arkansas county based on census maps. The townships of Cleveland County are listed below with the town(s) and/or city that are fully or partially inside them listed in parentheses. [7][8]

All six county officials are Democrats.

Treasurer Tollison beat Ray Redmond, Jr. in the Primary election. Redmond was one of the youngest county-wide candidates on the ballot in the United States during the 2006 primary election. He was 22 years old and a Democrat.

Collector Jacks beat Findley in the Primary Election by an overwhelming majority.

All other candidates were unopposed.