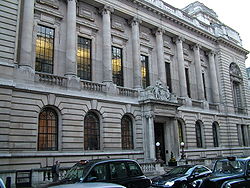 One Great George Street, is a building in London, England, that is the global headquarters of the Institution of Civil Engineers (ICE). Its location is in Westminster, just off Parliament Square. The building was originally a venue for ICE members to relax, meet and have conferences, but the facility became available for public events in 1989. 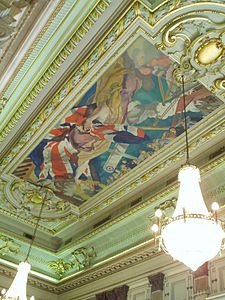 From 1839 until 1913, ICE occupied numbers 24-26 Great George Street. In the mid 1880s the government proposed re-development of the area around Great George Street to provide more office space for government departments. This meant the demolition of ICE's first location and lead ICE to a move its headquarters across the road to numbers 1-7.

One Great George Street was built for ICE between 1910 and 1913 and was the result of an architectural competition won by James Miller, RSA (1860-1947). This elegant and historical building has been described as a "monumental neo-classical design" and a "modern rendering of the late Renaissance". The exterior, foyer and staircase are made of Portland stone and many of the rooms are ornately decorated with French walnut and oak panelling, carved plaster ceilings and elaborate crystal chandeliers.

There are 19 rooms of varying size and style. Each room has been named after civil engineering’s most important contributors and the venue is adorned with original artwork of those key figures. The ICE's art collections include works from William Lionel Wyllie (1851-1931), John Lucas (1807-1874) and John Everett Millais (1829-1896) and is the world's largest collection of portraits of civil engineers. The ceiling of the Great Hall has a painting that commemorates the work of civil engineers in World War I. The Telford Theatre also holds a work of art by way of a twin fusee Grand Sonnerie Bracket Clock - made by the famous clockmaker Thomas Tompion, who is buried in Westminster Abbey.

Between 1987 and 1991 the venue was modernised to make better use of the space with a new theatre added along with another three rooms to the lower ground floor and a suite of smaller meeting rooms and business centre in the basement level.

One Great George Street has hosted many historical events and served as a location for the filming of movies and television.