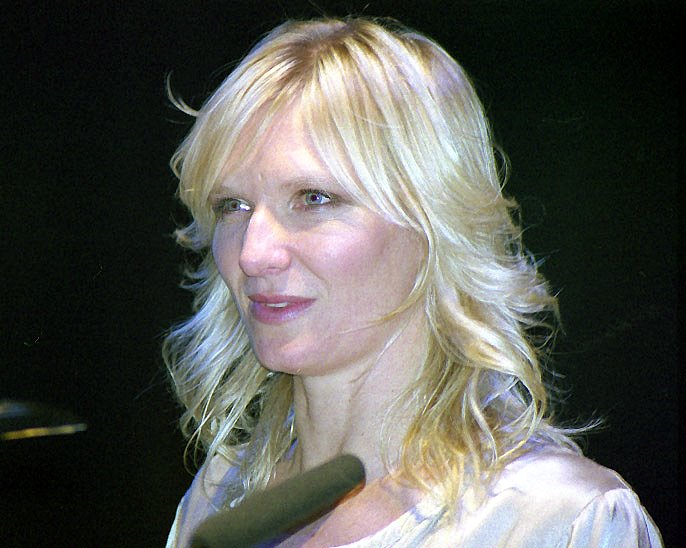 Johanne "Jo" Whiley (born in ) is an English radio DJ on , and a . She is married to Steve Morton, has three children and is expecting her fourth.

Whiley was born to Martin, an electrician, and Christine a postmistress. She attended Campion School near Northampton and then studied applied languages at – "I went to Brighton Polytechnic to do languages, which I didn't particularly enjoy.".

She had an unusual upbringing due to her sister, Frances, suffering from the symptoms of which meant that her sister had no sense of danger, suffered from outbursts and temper tantrums, obsessive behaviour and a short attention span. The illness is congenital and Jo is a carrier. She was tested at each of her three pregnancies, and says that she would have terminated a pregnancy if the tests had proved positive.

She swam competitively for Northamptonshire.

In her final year of her degree and still unsure of what she wanted to do, a conversation with a lecturer lead to a job with BBC Radio Sussex on a show called "Turn It Up." It allowed anyone to get on the radio, and also required Whiley to attend gigs and interview the musicians.

After a year she left for for a one year course on radio . After writing many letters, she got a job as a researcher on WPFM, a youth culture and music show. When the presenters and left, she took over, gaining her first presenting role. She then moved into television, firstly at where she produced and presented the indie show, and then at where she worked as a researcher on "The Word", with her friend .

Whiley moved on to from September 1993 until February 1997, during the heyday of with bands such as Blur and Oasis. She hosted a weekday evening show called "The Evening Session" with , which was oriented towards less-mainstream, non-dance music. Whiley also presented her own show on Saturday afternoon for a time in late 1995.

From 1995-1998 Jo was a regular guest presenter on , initially co-presenting with fellow DJ before flying solo and alternating with and . The three are referred to by the website as the '90s girls', as between them they presented nearly every show of 1997. However, the only occasion when all three presented together was on Christmas Day 1997. Jo returned to the show twice between 2005-2006 to co-present alongside lead presenter .

From February 1997, she had a weekday lunchtime show, called "The Jo Whiley Show" and later "The Lunchtime Social". This included elements of the evening show, such as tour dates and occasional live 'sessions' at while working within the restrictions of Radio 1's daytime schedule. When left Radio 1 for in February 2001, Whiley's show was moved to a mid morning slot.

There have been numerous features on the show. Current features are marked in bold type:

*Changing Tracks - Daily feature - This is when a listener emails in and asks for a song that reminds them of a time in their life when music changed everything, particularly if that had had a great experience or whether a song provided some kind of comfort after a traumatic time.

* - The Live Lounge is where invited artists come into the studio to perform music from their new album/single as well as performing a cover version of a song they particularly admire, and give their own take on it. Selected guests from 2006 include, who performed "Fly Me Away" and the ' "Boys Will Be Boys" and who sang "Maneater" and covered 's "Crazy". This is a popular feature of the show and a compilation album of such covered music has been released.

*Pet Sound - Daily feature - This is a song that has been considered by Jo to be something that we need to hear. It usually has not been released or is due to be released in due time. This song is played once on Jo's show for the week and it changes every week.

*Marilyn Manson was never in - This happens infrequently. Basically if there is a question that you do not know the answer to and would like answered, then this is the place to find out. The title comes from the urban legend that Marilyn Manson was a cast member for the series , when actually he wasn't.

*I Have Never... - An occasional feature where Jo embarks on something she has never done in her life and listeners are also challenged to the same thing, examples have included not watching for a whole week and trying a sport for the very first time.

*What Rocked? What Sucked? - This feature involves listeners to e-mail or text in to tell her and the listening audience what went well and what didn't. Jo sometimes offers her own view from time to time. This feature takes place on a Friday allowing listeners to reflect upon the good and bad points of the week that has passed.

*7 Song Shuffle - Daily feature - A mishmash of 7 different songs is played to a listener via telephone and they are then given around 45 seconds to name the artist and song title. The number of correct answers they get corresponds to the number of albums they can receive as prizes. The actual prize is vouchers for popular music store , which come in £10 denominations to represent the amount of albums. If not all 7 songs are guessed correctly then other listeners can claim them by texting or emailing the missing answers. It is more difficult than it appears, as the contestants have to listen to the jumbled tracks on the telephone rather than the radio, making the songs harder to differentiate. To date only 4 people have correctly answered all 7 songs correctly. After 17 July 2007 the game became 'just for fun' with listeners playing along at home and no prizes on offer due to the BBC's suspension of all telephone competitions.

*We Love Mondays - Weekly feature - At the start of each week, Jo runs through various reasons to be happy on a Monday morning, such as what is showing at the cinema, what music albums and singles are being released and what is coming up on television and radio.

*Ask the Experts - Weekly feature - For this feature, listeners can e-mail in their dilemmas or questions to a certain expert, whether it be about video games, gadgets or relationships for example. is one of the experts, with her field being relationships.

Whiley presents televised coverage of major music festivals, such as the . She also narrated the series, "Little Angels". In October 2007 she became a judge on the show "MobileAct Unsigned" which searches for a band trying to get a record deal. Jo has recently begun hosting a Music TV show on music channel , which is also broadcast in Hair Salons on their Toni&Guy.TV Network.

Whiley married executive Steve Morton in July 1991 in Northampton. The couple live in , and have three children; India (born May 1992), Jude (born December 1998) and Cassius (born May 2001). Morton calls Whiley "" because she blunders through life. She announced on her Radio 1 show on that she is expecting another child in October. [cite news|url= http://www.dailymail.co.uk/pages/live/articles/showbiz/showbiznews.html?in_article_id=564797&in_page_id=1773|title= Radio 1 DJ Jo Whiley is pregnant with her fourth child at the age of 42|publisher= Daily Mail|date= 9 May 2008|accessdate= 2008-07-24]

Jo Whiley has been criticised by some, including BBC Journalist , for crossing a picket line during the 2005 strike.Bunce commented on how Whiley was allowed to hand out prizes, referring to her as a "scab". When he was spoken to about this by members of the , he responded: "Well, she is a scab, isn't she. She crossed a picket line. No argument there. She's a scab so we can call her that." [cite web|url= http://libcom.org/library/jo-whiley-bbc-scab|title= Jo Wiley, BBC scab|date= 2 December 2007|accessdate= 2008-08-10]