Nevada County is a county located in the U.S. state of Arkansas. As of 2010, the population was 8,997. The county seat is Prescott.[1] Nevada County is Arkansas's 63rd county, formed on March 20, 1871, and named for the State of Nevada due to the perceived similarity between their physical shapes; the Arkansas county's shape roughly follows the same outline as the state's boundary when inverted. Contrasting with the name of the U.S. state, the local pronunciation for the southwestern Arkansas county is "nuh-VAY-duh". It is an alcohol prohibition or dry county.

Nevada County is part of the Hope Micropolitan Statistical Area.

Dorcheat Bayou, a 122-mile stream, begins in Nevada County. It flows south into Columbia County and then Webster Parish, Louisiana, and empties into Lake Bistineau. In the 19th century, the bayou was navigable for three to six months by steamboat from Bistineau to Minden. It is now popular for fishing and natural beauty.[2] 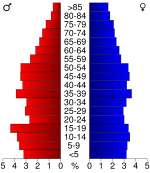 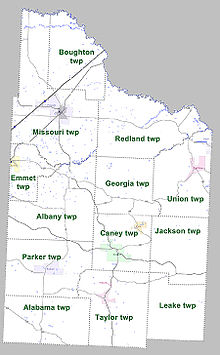 Townships in Nevada County, Arkansas as of 2010

Townships in Arkansas are the divisions of a county. Each township includes unincorporated areas and some may have incorporated towns or cities within part of their space. Townships have limited purposes in modern times. However, the US Census does list Arkansas population based on townships (often referred to as "minor civil divisions"). Townships are also of value for historical purposes in terms of genealogical research. Each town or city is within one or more townships in an Arkansas county based on census maps. The townships of Nevada County are listed below with the town(s) and/or city that are fully or partially inside them listed in parentheses. [9][10]