Erythromycin is a macrolide antibiotic that has an antimicrobial spectrum similar to or slightly wider than that of penicillin, and is often used for people who have an allergy to penicillins. For respiratory tract infections, it has better coverage of atypical organisms, including mycoplasma and Legionellosis. It was first marketed by Eli Lilly and Company, and it is today commonly known as EES (erythromycin ethylsuccinate, an ester prodrug that is commonly administered).

In structure, this macrocyclic compound contains a 14-membered lactone ring with ten asymmetric centers and two sugars (L-cladinose and D-desosamine), making it a compound very difficult to produce via synthetic methods.

Erythromycin is produced from a strain of the actinomycete Saccharopolyspora erythraea.

Abelardo Aguilar, a Filipino scientist, sent some soil samples to his employer Eli Lilly in 1949. Eli Lilly’s research team, led by J. M. McGuire, managed to isolate Erythromycin from the metabolic products of a strain of Streptomyces erythreus (designation changed to "Saccharopolyspora erythraea") found in the samples.

Lilly filed for patent protection of the compound and U.S. patent 2,653,899 was granted in 1953. The product was launched commercially in 1952 under the brand name Ilosone (after the Philippine region of Iloilo where it was originally collected from). Erythromycin was formerly also called Ilotycin.

In 1981, Nobel laureate (1965 in chemistry) and Professor of Chemistry at Harvard University (Cambridge, MA) Robert B. Woodward, along with a large number of members from his research group, posthumously reported the first stereocontrolled asymmetric chemical synthesis of Erythromycin A.

The antibiotic clarithromycin was invented by scientists at the Japanese drug company Taisho Pharmaceutical in the 1970s as a result of their efforts to overcome the acid instability of erythromycin.

Scientists at Chugai Pharmaceuticals discovered an erythromycin-derived motilin agonist called Mitemcinal that is believed to have strong prokinetic properties (similar to erythromycin,) but lacking antibiotic properties. At the present time, erythromycin is commonly used off-label for gastric motility indications such as gastroparesis. If Mitemcinal can be shown to be as effective a prokinetic agent, it would represent a significant advance in the GI field as treatment with this drug would not carry the risk of unintentional selection for antibiotic-resistant bacteria.

Over the years since the discovery of erythromycin A and its activity as an antimicrobial, many attempts have been made to synthesize it in the laboratory. However, the presence of ten stereospecific carbons and several points of distinct substitution has made the total synthesis of erythromycin A a formidable task.[1] Complete syntheses of erythromycins’ related structures and precursors such as 6- deoxyerythronolide B have been accomplished, giving way to possible syntheses of different erythromycins and other macrolide antimicrobials.[2] However, Woodward did successfully complete the synthesis of erythromycin A.[3][4][5] This total synthesis begins with (7) and (8). After being coupled, the resulting structure is subjected to a series of reactions, including hydrolysis and stereospecific aldolization. The resulting pure enone is then converted to the desired dithiadecalin product (9) through a series of reduction and oxidation reactions. (9) is then converted to both a ketone (10) and an aldehyde (11).

With these two species, each of which resembling key segments of the erythronolide A seco acid, an aldol condensation is carried out to yield (12). (12) is put through several reactions, including the addition of benzyl thiol, the coupling of enolates, and stereospecific reduction to yield (13), which contains the carbon skeleton and stereocenters of the erythronolide A seco acid.

(13) is then subjected to a series of reactions including successive deprotections and acetylization to yield (14), a compound that is more likely to yield a lactone. Acetalization of (14) yields a precursor to the desired thioester (15), which was achieved by replacing the terminal methoxy group with the required thio group. (15) is then lactonized in 70% yield to give (16).

To complete the synthesis of erythromycin A, (16) is acylated with p-phenylbenzoyl chloride, undergoes hydrolysis, and is deprotected at its hydroxyl groups at carbons 3 and 5 to yield (17). After a series of glycosidation reactions, (17) is converted to (18). (18) is then subjected to a number of reactions, eventually converting carbon 9 from an amine to the ketone, yielding the final erythromycin A product (1).

Total yield for Woodward’s complete synthesis of erythromycin A was approximately 0.02%, leaving future scientists with a clear goal for improvement. 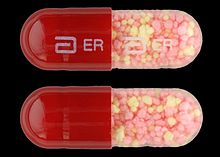 The following erythromycin combinations are available for oral dosage:[6]

For injection the available combinations are:[6]

Gastrointestinal disturbances, such as diarrhea, nausea, abdominal pain, and vomiting, are very common because erythromycin is a motilin agonist.[8] Because of this, erythromycin tends not to be prescribed as a first-line drug. However, erythromycin may be useful in treating gastroparesis due to this pro-motility effect. Intravenous erythromycin may also be used in endoscopy as an adjunct to clear gastric contents.

More serious side-effects include arrhythmia with prolonged QTc intervals including Torsades-de-Pointe and reversible deafness. Allergic reactions range from urticaria to anaphylaxis. Cholestasis, Stevens-Johnson syndrome, and toxic epidermal necrolysis are some other rare side-effects that may occur.

Erythromycin estolate has been associated with reversible hepatotoxicity in pregnant women in the form of elevated serum glutamic-oxaloacetic transaminase and is not recommended during pregnancy. Some evidence suggests similar hepatotoxicity in other populations.[10]

It may also alter the effectiveness of combined oral contraceptive pills because of its effect on the gut flora. Erythromycin is an inhibitor of the cytochrome P450 system, which means that it can have a rapid effect on levels of other drugs metabolised by this system, e.g., warfarin.

Erythromycin displays bacteriocidal activity, especially at higher concentrations,[12] but the mechanism is not fully understood. By binding to the 50s subunit of the bacterial 70s rRNA complex, protein synthesis and subsequent structure and function processes critical for life or replication are inhibited.[12] Erythromycin interferes with aminoacyl translocation, preventing the transfer of the tRNA bound at the A site of the rRNA complex to the P site of the rRNA complex. Without this translocation, the A site remains occupied and, thus, the addition of an incoming tRNA and its attached amino acid to the nascent polypeptide chain is inhibited. This interferes with the production of functionally useful proteins, which is the basis of this antimicrobial action.

Erythromycin is easily inactivated by gastric acid; therefore, all orally-administered formulations are given as either enteric-coated or more-stable salts or esters, such as erythromycin ethylsuccinate. Erythromycin is very rapidly absorbed, and diffuses into most tissues and phagocytes. Due to the high concentration in phagocytes, erythromycin is actively transported to the site of infection, where, during active phagocytosis, large concentrations of erythromycin are released.

Most of erythromycin is metabolised by demethylation in the liver. Its main elimination route is in the bile. There is little renal excretion. Erythromycin's elimination half-life is 1.5 hours.

Erythromycin is metabolized by enzymes of the cytochrome P450 system, in particular, by isozymes of the CYP3A superfamily, CYP3A (Hunt et al., 1992). The activity of the CYP3A enzymes can be induced or inhibited by certain drugs (e.g. dexomethasone) which can cause it to affect the metabolism of many different drugs, e.g. erythromycin. If other CYP3A substrates — drugs that are broken down by CYP3A - such as simvastatin (Zocor), lovastatin (Mevacor), or atorvastatin (Lipitor)—are taken concomitantly with erythromycin, levels of the substrates will increase, often causing adverse effects. A noted drug interaction involves erythromycin and simvastatin, resulting in increased simvastatin levels and the potential for rhabdomyolysis. Another group of CYP3A4 substrates are drugs used for migraine such as ergotamine and dihydroergotamine; their adverse effects may be more pronounced if erythromycin is associated.[11] Earlier case reports on sudden death prompted a study on a large cohort that confirmed a link between erythromycin, ventricular tachycardia, and sudden cardiac death in patients also taking drugs that prolong the metabolism of erythromycin (like verapamil or diltiazem) by interfering with CYP3A4.[13] Hence, erythromycin should not be administered to people using these drugs, or drugs that also prolong the QT interval. Other examples include terfenadine (Seldane, Seldane-D), astemizole (Hismanal), cisapride (Propulsid, withdrawn in many countries for prolonging the QT time) and pimozide (Orap). Theophylline, which is used mostly in asthma, is also contraindicated.

Erythromycin is not recommended when using clindamycin-containing products, even topical products such as Duac or BenzaClin. In general, the simultaneous use two different erythromycin derivatives (such as clindamycin and Mitemcinal) should be avoided as drugs in this macrolide family possess a common mechanism of action.