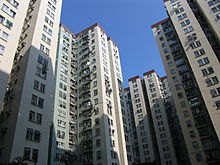 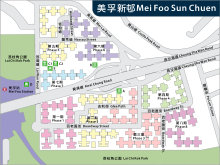 Mei Foo Sun Chuen was built in 8 stages[1] from 1965 to 1978 on the reclamation formerly used for petroleum storage by Mobil (Now ExxonMobil) in Hong Kong (Mobil's Chinese trading name in Hong Kong is 美孚/Mei Foo). The development was conducted by Mei Foo Investments Limited, a subsidiary company of Mobil Oil (Hong Kong) Limited.[1]

At the time of building, the government was tackling the serious squatter hut problem by constructing public resettlement estates for citizens without homes (especially those displaced by the Shek Kip Mei fire). Mei Foo Sun Chuen was conceived to meet the housing needs of Hong Kong's middle-income families, an emerging and growing group at the time.[1] At the time, a flat in Mei Foo cost around HK$40,000.[citation needed]

The residential complexes of Mei Foo were considered grand for the standards at the time in was built; every apartment unit offers a balcony, at least two rooms and one bathroom. The apartment sizes vary from 600 to 1,800 square feet (56 to 167 square metres). Every apartment complex has a 24 hour unified, unarmed security force. Entry to a residential block requires an entrance code, which changes periodically.

Mei Foo Sun Chuen has several schools, medical clinics, salons, newspaper kiosks, supermarkets, shopping arcades, restaurants and food markets. The private secondary schools, in particular are formerly notable for academically poor students (The schools in Hong Kong are divided, based on academic achievements into 3 categories. The aforementioned schools are in the third category and are deemed to have less than satisfactory performances.) However, as education policy changes, some schools evolve into multicultural ones.

The once largest owners' corporation with legal status in Hong Kong, The Incorporated Owners of Mei Foo Sun Chuen - Stage I, was formed in 1997. The founder of the corporation, Yiu Chi-Wai, served as the Chairman of the Management Committee from 1997 to 2000. The other seven stages' owners' corporations were also formed during the period.

Mei Foo is on the crossroad between Kowloon and Tsuen Wan. It is also considered part of the west border of urban Kowloon. Kwai Chung Road and Lai Chi Kok Bridge are the major motorways in the area. A major bus terminus is located under the Kwai Chung Road underpass as an end destination for multiple bus routes. The MTR rapid transit railway services Mei Foo Station by the Tsuen Wan Line, completed in 1982, and by the West Rail Line, operational since 2003. Other forms of public transport like minibuses and taxis also service the estate.

The Mei Foo skatepark is the biggest skatepark in Hong Kong and also the most visited. It contains two half pipes and several quarter pipes, single rails and fun boxes. Most of the ramps are above 6 ft (1.8 m). The skatepark has been visited by various professional skateboarders such as Chris Haslam, Terrell Robinson, Mike Peterson. My Little Airport, a local indie band, made a song about it.

A collection of photos pertaining to Mei Foo Sun Chuen is shown below: