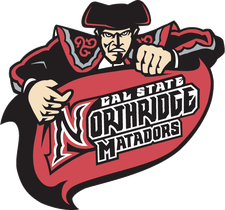 The Cal State Northridge Matadors basketball team is college basketball program representing . The team currently competes in the of the NCAA's . The Matadors' current head coach is .

Until 1972, the school and its teams were known as San Fernando Valley State College. The Matadors played their home games at local high schools until Matador Gymnasium was completed, before the start of the 1962-63 season.

San Fernando Valley State College opened in 1958, and fielded a basketball program for the 1958-59 season. The program's first head coach was Paul Thomas.

The first game in SFVSC's history was a 110-45 loss to Chapman College on December 1, 1958. The fledgling team would lose again to Westmont eight days later. They broke through for the first win of the program's history on December 13, a 73-64 triumph over La Verne. They would go on to finish their inaugural season with a record of 3-13.

The Matadors showed some improvement over the next two seasons, and joined the CCAA in 1961. Matador Gymnasium opened on November 30, 1962, with a 69-59 defeat to Pepperdine. Two consecutive last-place finishes in the CCAA resulted in Thomas's dismissal at the end of the 1962-63 season.

Thomas's replacement as head coach was Jerry Ball, who had been an assistant under Thomas. Ball showed immediate progress, taking the team to a 9-17 record in 1963-64, a six-game improvement over Thomas's final season. He would guide the Matadors to their first-ever winning season, finishing 18-8 in 1964-65. SFVSU would win their first conference championship under Ball, finishing 7-1 in the CCAA in 1970-71. Ball left the school after this season.

Ball's top player was Jerry Joseph, who played for the Matadors from 1967 to 1970. Joseph ended his collegiate career with 1204 points and 807 rebounds. He is still the all-time leading rebounder in school history.

Ball was replaced by Pete Cassidy, an SFVSC assistant coach who was a player during the program's first two seasons. Cassidy would pick up where Ball left off, finishing 16-9 and tied for first in the CCAA. For the next five seasons, Northridge would be mired in mediocrity. However, player Paul McCracken, a high-flying ace later played in the NBA. Coach Cassidy is one of the winningest coaches in Division II history.

In the 1977-78 season, things took off for the Matadors. Led by All-Americans Terry Miller and Larry Singleton, and Chuck Evans the team would finish 22-7 and win the CCAA title. CSUN would make their first postseason appearance, hosting the Division II Western Regional, but losing to San Diego 70-67 in the regional final. This game set the Matadome attendance record of 3,100 fans, which has not been broken and will likely never be broken, as the gym now holds just 1,600 people. During this season, the Matadors also achieved their first national ranking, ending the regular season ranked 7th in the Division II poll.

The following season, Cassidy's squad notched another 20-win season and another CCAA title led by All-American Chuck Evans. Once again, they were eliminated from the NCAA Western Regional by San Diego. Over the next five years, CSUN would have four winning seasons, but not reach the postseason.

That changed in 1984-85, when the Matadors finished 20-10, winning the CCAA and reaching the NCAA West Regional, where they were eliminated by Cal State Hayward.

The Move to Division I

Cal State Northridge moved its athletics program, including basketball, to Division I starting with the 1990-91 season. The first season ended with a forgettable 8-20 record. In 1994, Andre Chevalier broke Malkin's 32-year-old scoring record, but it was of little help. Forced to play as an independent, and then in the fledgling American West Conference, the Matadors never won more than 11 games in any of their first six seasons in Division I.

Northridge finally found a solid conference affiliation in 1996, joining the . Cassidy was replaced by Bobby Braswell, a Northridge alum who was previously an assistant coach at Oregon. Braswell brought with him an up-tempo, high-pressure style of play that has kept the Matadors among the national leaders in steals and turnovers forced during his tenure. The turnaround was immediate, as CSUN went 14-15 and reached the Big Sky Tournament championship game, falling just short of an NCAA berth in an 82-79 loss to Montana.

Braswell took the program to even further heights, going 20-10 in the 1999-2000 season, and finally breaking through with a 22-10 season that saw the Matadors win the Big Sky regular season and tournament championships and make their first appearance in the NCAA Division I Tournament. This team was led by Honorable Mention All-American Brian Heinle, who is the school's all-time scoring leader with 1641 points, and Markus Carr, who led the nation in assists that year and holds the school record with 767 for his career.

Northridge left the Big Sky to join the Big West in 2001 and have struggled since. Their best finish in the Big West have been ties for 3rd-place in 2001-02 and 2004-05. Led by Ian Boylan, who holds CSUN records for three-pointers and steals, they finished 18-13 in 2004-05, their only winning record since leaving the Big Sky. CSUN reached the Big West Tournament title game in 2003-04, after shocking 23rd-ranked Utah State in the semi-finals.