The DShK 1938 (ДШК, for Дегтярёва-Шпагина Крупнокалиберный, Degtyaryova-Shpagina Krupnokaliberny, 'Degtyaryov-Shpagin Large-Calibre') is a Soviet heavy machine gun firing the 12.7x108mm cartridge. The weapon was also used as a heavy infantry machine gun, in which case it was frequently deployed with a two-wheeled mounting and a single-sheet armour-plate shield. It took its name from the weapons designers Vasily Degtyaryov, who designed the original weapon, and Georgi Shpagin, who improved the cartridge feed mechanism. It is sometimes nicknamed Dushka (lit. "Sweetie", "Dear"), from the abbreviation.

The requirement for a heavy machine gun appeared in 1929. The first such gun, the Degtyaryov, Krupnokalibernyi (DK, Degtyaryov, Large calibre), was built in 1930 and this gun was produced in small quantities from 1933 to 1935.

The gun was fed from a drum magazine of only thirty rounds, and had a poor rate of fire. Shpagin developed a belt feed mechanism to fit to the DK giving rise, in 1938, to the adoption of the gun as the DShK 1938. This became the standard Soviet heavy machine gun in World War II.

Like its U.S. equivalent, the M2 Browning, the DShK 1938 was used in several roles. As an anti-aircraft weapon it was mounted on pintle and tripod mounts, and on a triple mount on the GAZ-AA truck. Late in the war, it was mounted on the cupolas of IS-2 tanks and ISU-152 self-propelled guns. As an infantry heavy support weapon it used a two-wheeled trolley, similar to that developed by Sokolov for the 1910 Maxim gun. It was also mounted in vehicle turrets, for example, in the T-40 light amphibious tank.

In addition to the Soviet Union and Russia, the DShK has been manufactured under license by a number of countries, including the People's Republic of China, Pakistan and Romania. Today, it has largely been phased out in favour of the more modern NSV and Kord designs.

A British Army Westland Lynx helicopter was hit 15 times and forced to make an emergency landing in June 1988 during The Troubles by two Provisional IRA DShK's smuggeled in from Libya near Cashel Lough Upper, south County Armagh.[1] They were also used in 2004, against British troops in Al-Amarah, Iraq.[2] 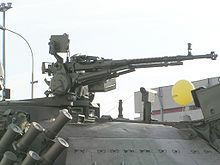 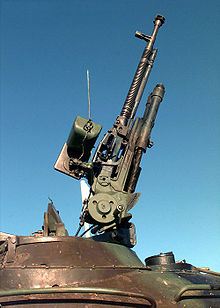 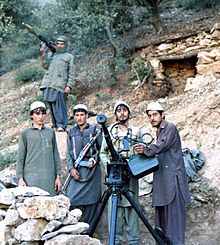 Jamiat-e Islami Mujahideen of Afghanistan in 1987 with a DShK