The Neapolitan Mastiff, Italian Mastiff, (Mastino Napoletano in Italian) is a large, ancient dog breed. This massive breed is often used as a guard and defender of family and property due to their protective instincts and their fearsome appearance. 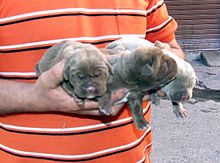 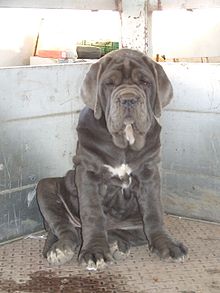 The Neapolitan Mastiff is fearless and extremely protective of its home and family. They prefer to be with their family and to remain in and around the home at all times. The Neapolitan Mastiff rarely barks unless under provocation, renowned for sneaking up on intruders as opposed to first alerting them of their presence.

Neopolitan Mastiffs, as a breed, are extremely intelligent dogs with a tendency to be independent thinkers. They learn quickly, which is both good and bad, since this guardian breed needs extensive proper socialization to learn to accept strangers, especially within the home; without proper early socialization and training, these dogs are likely to become aggressive towards strangers and unfamiliar dogs. Like with other breeds, forceful training methods, "alpha roles", and a general "dominance" mentality will not work with these dogs, especially since it is difficult to try to physically dominate a dog that is nearly as large as an adult human; if you want a well mannered dog, prevent problems before they happen by using positive training methods, beginning socializing early, and continuing socializing throughout life.

The Neapolitan Mastiff is not a breed for most people, and certainly not a dog for beginners. Neapolitans must be well socialized with people, especially children, as Neos are large, powerful dogs and do not always know their own strength. Additionally, young children have young friends, and even with extensive socialization and training, Neapolitans will be wary of strangers and protective of their family, which can be disastrous for small children.

Additional protection training is unnecessary because they are natural guard dogs and always have been. As with every breed, obedience training is very important. The Mastino is very tolerant of pain due to the breed's early fighting background and the fact the skin is loose on the body, so it is important to routinely check for health problems, as a Neo may not behave differently when injured or ill. They also are renowned for drooling especially after drinking or if they get excited. Their temperament and protective instincts are noticeably sharper as compared to allied "heavy molosser" breeds such as the Dogue de Bordeaux, the English Mastiff, the Mastín Españ̃ol etc. and therefore they have been used as a breed component in the development of many modern protection breeds such as the Swinford Bandog (also known as the American Bandog Mastiff) and others. This breed is not particularly dog-aggressive, but males are known to be very dominant and, at times, confrontational. 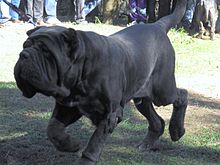 The movement of a Grey Neapolitan Mastiff with cropped ears 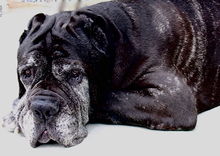 At ten years, this brindle Neo is a senior citizen of this breed

The Neo has some specific health concerns. The most common is Cherry eye. Others include:

Additionally, Neos do not do well in hot weather, and are prone to heatstroke. Like most giant breeds, the Neapolitan Mastiff is not particularly long-lived, averaging 7 to 9 years, however, with a proper biologically appropriate diet, safe exercise, and proper weight maintenance, there is no reason that the average Neo cannot live beyond that.[citation needed] 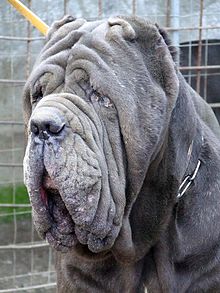 Neapolitan Mastiff Head. Note the distinctive upside down V the dewlap forms and the thick wrinkle on the top of the cranium

When it comes to exercise, Neapolitans are not a very active breed as their energy tends to be short lived and their weight causes stress to their joints when excessive. However, they can and will have short, extremely powerful bursts of energy. 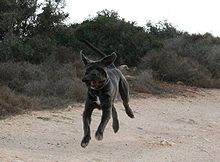 The Neapolitan Mastiff is one of the Molosser type of dogs, which probably descend from a common stock; whether this was the Molossus attested in antiquity is controversial.

Despite centuries of popularity throughout Europe, this type of dog was almost lost after World War II. Soon after the war, Italian painter Piero Scanziani established a breeding kennel to turn the mastiff-type dogs of Italy into a formal breed which was then named the Neapolitan Mastiff and English Mastiff was used to help in this process.[citation needed] A Neapolitan Mastiff has set the record for giving birth to 24 puppies, although 4 of them didn't surive.

Neapolitan Mastiffs in the media