Mannersdorf am Leithagebirge is a town in Austria. It is located in the district of Bruck an der Leitha in Lower Austria. Mannersdorf is seated on an agricultural plain, at the base of a range of wooded hills called the Leitha Mountains (Leithagebirge), from which it receives its full name. The town is about two miles away from the Leitha River.

Mannersdorf is the location of a fine palace built 1753-1755. It is adjacent to a large limestone quarry, which provided the stone for many of the historic buildings of Vienna. Today, the quarried limestone is used for the manufacture of concrete.[2]

The area of Mannerdorf has been inhabited since Neolithic times, as the archaeological materials in the municipal museum demonstrate. [2] Excavations in 1981 indicate that the town itself has existed for at least 1000 years; the earliest historical mention is from 1233.[2]

Mannersdorf lies along historical invasion routes and its history has not been entirely serene. The town was razed by invading Turkish armies in 1529 and 1683, and burnt to the ground in 1704, 1705 and 1708 by the rebelling Hungarian forces known as the Kuruzzen. In 1805, 1809, and 1810, French troops were quartered there, following successful invasions of Austria by Napoleon. Soviet troops occupied the town near the end of World War II, in 1945.[2] 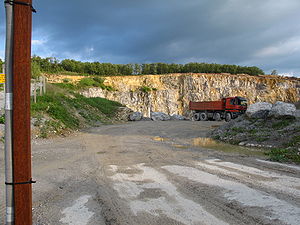 The limestone quarry in the hills just south of Mannersdorf

In 1517, a Dr. Enzianer, who was Rector of the University of Vienna and court physician, established a bathing establishment, making use of the waters of a slightly sulfurous[3] spring, temperature 22.5 degrees C. This spa remained popular for about 250 years.[2] In the mid 18th century the spa was quite fashionable, visited by members of the Imperial family including Empress Maria Theresia. The baths continued until 1786, when they were closed by a decree of Emperor Joseph II.[2] The baths were reopened only much later (1928), and continue to operate today, more as a water park (with pools and a water slide) than as a traditional spa.

Mannersdorf was also a center of music. Prince Hildburghausen, the local aristocratic patron in the mid 18th century, put on concerts and operatic productions in his palace, and eminent composers came to the town to visit the spa.

The composer Joseph Haydn spent three summer months in Mannersdorf in 1753, though being only 21 and a struggling freelancer, he came not as a tourist but more or less as a servant. The ambassador of Venice to the Austrian Empire, Pietro Correr, visited the spa in the company of his mistress, who required the presence of the singing teacher who regularly taught her in Vienna. This was the Italian composer Nicola Porpora. At the time, Haydn was working for Porpora as an accompanist and valet. He was placed on salary in the Correr establishment at a rate of six ducats per month and ate his meals with the Correr servants. The visit was a career opportunity for the young Haydn, as the famous composers Gluck and Wagenseil heard him play.