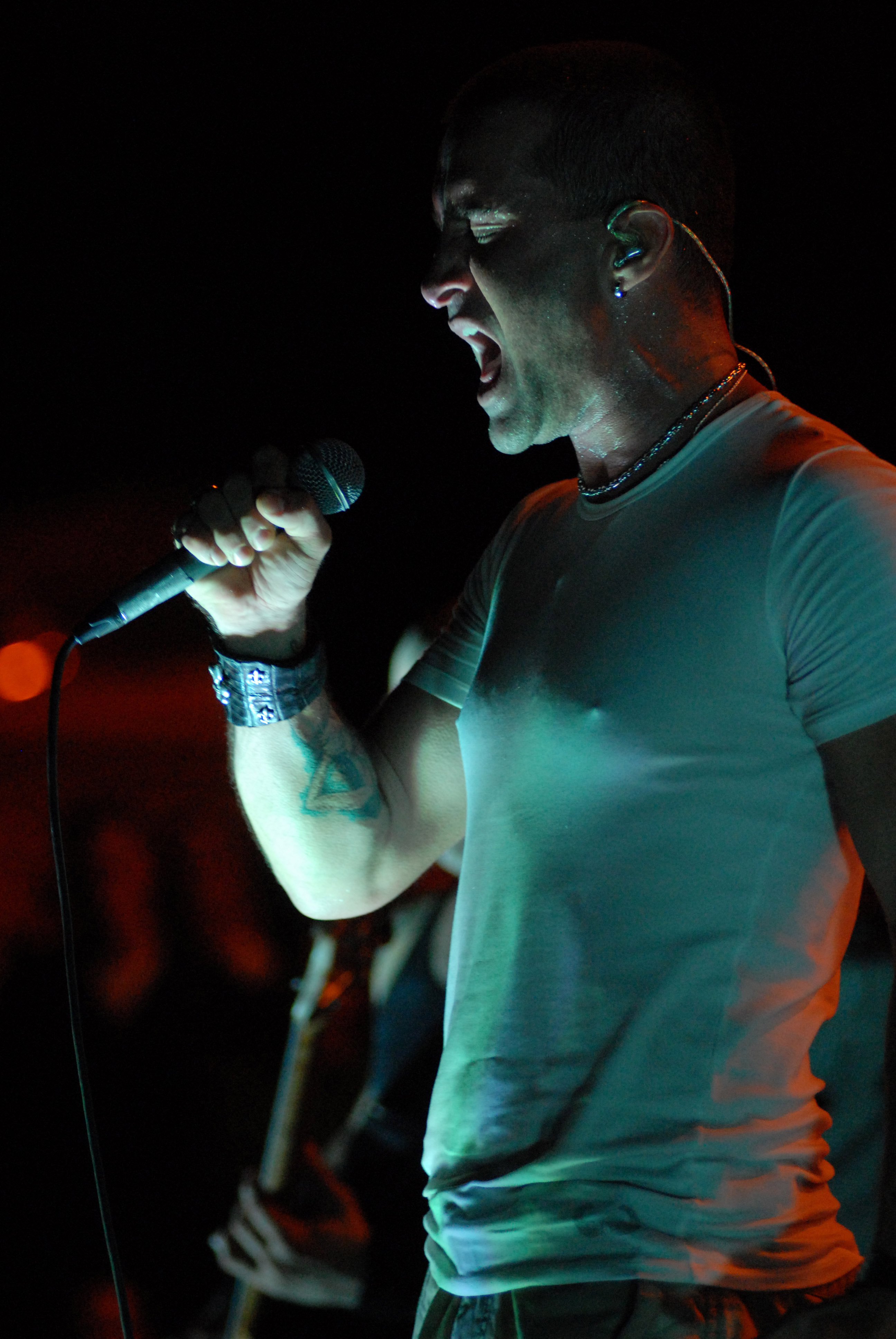 Scott Alan Stapp (born , , in Cherokee, ) is an American and best known as the lead singer of the now disbanded rock band Creed.

Stapp went to Lake Highland Prepatory School is Orlando then Stapp attended Valencia College in Orlando, where he received his associate's degree in music. [cite web|url=http://www.nndb.com/people/246/000059069/|title=NNDb profile |accessmonthday=August 20 |accessyear=2006] He then attended Lee College (now known as ) in , and , where Creed was formed in 1995.

During interviews, he does not discuss Creed, his relationships with the members of the band, or the meanings of his lyrics, preferring instead to let the lyrics speak for themselves. He has told the press that he is a .

Stapp cites The Doors, particularly Jim Morrison, as one of his principal musical influences, and performed with the surviving members of the band for a televised concert in 1999, as well as the "" tribute album. On 's "" special on Creed, of The Doors said, "When you hear Scott Stapp singing, it's kind of shocking 'cause it sounds so much like Jim."

In 2004, Creed officially announced its breakup and Stapp began working on his debut album, "", which was released in 2005. The other members of Creed went on to form with former vocalist .

Along with , , , and , Stapp is one of the rumored singers to be currently rehearsing and recording new material with legendary rock band , who are planning a reunion tour and possibly a new album that might exclude Led Zeppelin lead vocalist .

"The Great Divide" was released in the U.S. on , , peaking at #19 on "Billboard"'s Top 200 chart. However, due to certain controversies in Stapp's private life and overall mixed reviews of the album, it has sold poorly compared with the amount sold during his time with Creed, although it was certified platinum in Fact|date=July 2007 [http://www.riaa.com/goldandplatinumdata.php?table=SEARCH] . His backing band for the record and live shows since has consisted of Aristides Rincon and John Curry on guitars, Mitch Burman on bass, and Mark Archer on drums. They are all members of the band .

It was reported on August 6, 2007, on Stapp's page that he was currently in the studio recording new material.Fact|date=August 2007

Plans for a feature-length documentary about Scott Stapp are in the works to go along with his expectant 2008 album. [ [http://passionbreedsfollowers.com/news/current.shtml Current News | Passion Breeds Followers - The Scott Stapp Fansite ] ]

In April 2008, Scott Stapp uploaded a cover of 's "Running to Stand Still" on MySpace.

On August 8, 2008, Scott posted an acoustic version of "Broken" which was on his previous record. According to his management, his new album is now due on the second quarter of 2009. [ [http://passionbreedsfollowers.com/news/current.shtml Current News | Passion Breeds Followers - The Scott Stapp Fansite ] ]

Scott and his new band will be heading overseas for a 28 day tour to perform for the troops, starting on September 23, 2008.

* pornography company Red Light District (RLD) claims to have acquired a 1999 sex tape in which Stapp, soon after he was divorced from Hillaree Burns, and singer performed acts with four female fans. [cite web|url=http://www.billboard.com/bbcom/news/article_display.jsp?vnu_content_id=1002034314|title=Kid Rock, Stapp Sex Tape To Hit Stores? |accessmonthday=February 16 |accessyear=2006] RLD planned to release the tape in 2006, but one of the women involved filed to block it, [cite and Stapp insists that there was no sexual intercourse on the tape. web|url=http://www.thesmokinggun.com/archive/0303061stapp1.html|title=Smoking Gun page on Miami-Dade Jane Doe lawsuit|accessmonthday=March 4 |accessyear=2006] Rock also filed an injunction and called Stapp an "idiot". [cite web|url=http://www.eonline.com/news/archive/article/index.jsp?uuid=90d89100-c733-46e5-8b54-4694c65a31c9&entry=index|title=More Sex Tape Red Tape for Stapp |accessmonthday=March 4 |accessyear=2006]
* Stapp was arrested by Florida police in and charged with reckless driving after his ran off the road before swerving back into the proper lane. He was released from custody after posting $500. [cite web|url=http://www.thesmokinggun.com/mugshots/stappmug1.html|title=Smoking Gun Mug Shot: Scott Stapp]

* Hours after his wedding to Jaclyn Nesheiwat in , Stapp was arrested at en route to his honeymoon and was stopped from boarding a plane there after airline personnel deemed the rocker "antagonistic" and "boisterous." A spokesman for the airport police said that Stapp was arrested on suspicion of being drunk in a public place and taken to the station for processing. Stapp demanded a blood-alcohol test at the station, where he registered a 0.18 -- twice the legal limit (for the operation of a motor vehicle.) He was then booked and released on $250 . After a court hearing, he was not charged. Fact|date=February 2007

* Stapp was intoxicated during "", a celebrity poker show on the cable channel . "During the episode, Stapp slurs his words, curses incessantly, claims has 'a little cock,' demonstrates a bizarre series of kung-fu moves, and demands a kiss from co-host ('s fiancee)." [cite web|url=http://www.rollingstone.com/special/9139515/scott_stapps_fall_from_grace|title=Scott Stapp's Fall From Grace]
* Stapp was also involved in a brawl with members of the band 311 on Thanksgiving Day 2005 at a hotel and showed up drunk for a TV interview. 311's , and claim, on their official website, that Stapp started the fight. Although hotel security director Jonathan Jordan claims that security cameras captured the incident and that "Stapp was 'attacked', it was never proven that Stapp had initiated the fight after punching . Martinez told MTV: "He was acting out of control, looking for attention, and being loud and obnoxious. He walked up to the bar, took a shot of whiskey, and then slammed the shot glass down on the bar, and it shattered everywhere. He said some disrespectful things towards my wife, and I asked him what he said, and then Chad came over and said, 'Don't talk to her that way,' and Scott got up and Chad followed him. After a while he went back to the bar and was looking for attention. And then a few minutes later, he came back to the table where my wife was, sat down across from us, and wanted attention. He started the fight,Thats the 311 account Once again the security cameras captured the incident so fans of 311 and Mtv took there side though security had stated Stapp was attacked. Then the police arrived, escorted Scott to his room, and then told him to get out of the hotel." No members of were charged. Later that night, Martinez One of the band members of 311 went to a local hospital to treat what's called a "boxer's fracture." His right hand was in a cast, but he was able to perform the following day in Baltimore. A spokesperson for Stapp, who had previously attracted controversy surrounding incidents like a drunken 2002 concert stop with Creed in Chicago, did not return MTV News' requests for comment on the altercation, and according to the , no charges have been filed.

* Stapp is featured in the song "Brother Of Mine." The song was on the album "The Path of Least Resistance".
* Stapp is mentioned in the song "Kountry Gentlemen" by on the "Business Up Front, Party in the Back" album.
* Stapp is also the main subject in the Grindcore band Ah! Bees! song "Scott Stapp is a Pussy"
* He had his songs "The Great Divide" and "You Will Soar" played in WWE's "Tribute to the Troops" show in late 2005; also, his album was featured on WWE.COM.
* Stapp is ranked 68 on "Hit Parader" magazine's list of "Heavy Metal's All-Time Top 100 Vocalists."
* Stapp was also ranked # 1 in The 23 most annoying frontmen in rock according to "Metromix" [http://chicago.metromix.com/music/photogallery/the-23-most-annoying/507348/content]