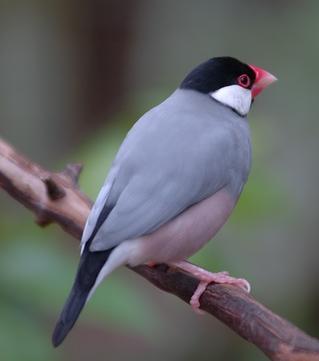 The Java Sparrow, "Padda oryzivora" also known as Java Finch or Java Rice Bird is a small . This is a resident breeding bird in Java, and in . It is a popular cagebird, and has been introduced in a large number of other countries.

The Java Sparrow is a very gregarious bird which feeds mainly on grain and other seeds. It frequents open grassland and cultivation, and was formerly a pest in fields, hence its scientific name. The nest is constructed in a tree or building, and up to eight eggs are laid.

The Java Sparrow is 17cm in length. The adult is unmistakable, with its grey upperparts and breast, pink belly, white-cheeked black head, red eye-ring, pink feet and thick red bill.

Both sexes are similar, but immature birds have brown upperparts and paler brown underparts and cheeks. The rest of their head is dark grey rather than black, and the bill is grey with a pink base.

The Java sparrow is considered to be a serious agricultural pest of rice. Due to ongoing habitat loss and hunting in some areas, the Java Sparrow is now uncommon in its native range. It is evaluated as Vulnerable on the of Threatened Species and is listed on Appendix II of .

* Database entry includes justification for why this species is vulnerable
* "Finches and Sparrows" by Clement, Harris and Davis, ISBN 0-7136-8017-2