Custer County is the tenth least populous of the 64 counties of the State of Colorado of the United States. The county population was 3,503 at U.S. Census 2000.[1] The county seat is Westcliffe.

Custer County was created by the Colorado legislature on March 9, 1877, out of the southern half of Fremont County. Originally set in Ula, the county seat moved to Rosita in 1878, and to Silver Cliff in 1886 before settling in Westcliffe in 1928. It was named in honor of Lt. Colonel George Armstrong Custer, who had died the previous year.

The county was the site of a silver rush during the 1870s. Thousands of men poured into the county during this time in the hunt for silver. Some of the notable mines include the Geyser Mine (on the north edge of the town of Silver Cliff), the Bassick Mine (near the ghost town of Querida) and the Bull Domingo (north of Silver Cliff).

During the late 19th century a railroad line was connected through the Grape Creek Canyon but was permanently closed after a few disastrous floods. The old railhouse has been turned into a historical landmark in the town of Westcliffe.

After the mines were exhausted, the population dropped considerably and was replaced by cattle ranchers. An extensive system of irrigation ditches was built throughout the valley. Ranching in the Wet Mountain Valley continues to this day. 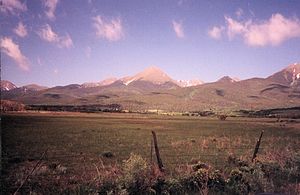 The county is very rugged and would be virtually inaccessible without roads. The lowest point of the county is around 6,000 feet (1,800 m) in elevation, but most of the county is rugged and mountainous. The county seat of Westcliffe is about 7,800 feet (2,400 m) and along with nearby town Silver Cliff lies in the Wet Mountain Valley which sits at the base of the Sangre de Cristo Mountains. The peaks of the Sangre de Cristo Mountains to the west reach heights in excess of 14,000 feet (4,300 m) with Crestone Peak being the highest at 14,294 feet (4,357 m) and 7th highest fourteener in Colorado.

The county is governed by three County Commissioners who are elected to 4-year terms with a term limit of two. In 2008, the county was represented by:

However, as of March 2009, Dick Downey and Kit Shy were replaced by Jim Austin and Lynn Attebery, Chairman.

There are several other public offices including Coroner, Sheriff, County Clerk and others.

Despite the surface appearance of a homogeneous political culture, there is considerable dispute among residents over planning. One segment of residents (which includes ranchers) would like to see the County preserved in its present state as a mountain paradise with its rural ranching culture, with strict limitation on development. Proponents are sometimes seen as "anti-growth" and "anti-property rights." Another segment of the population would like to see less government and less restrictions on growth and development for the growth of business and the economy. Proponents are seen as "anti-environment" or "anti-agriculture."