NADH dehydrogenase (EC 1.6.5.3) (also referred to as NADH:ubiquinone reductase or Complex I) is an enzyme located in the inner mitochondrial membrane that catalyzes the transfer of electrons from NADH to coenzyme Q (CoQ). It is the "entry enzyme" of oxidative phosphorylation in the mitochondria.[1]

Electron transport chain. NADH dehydrogenase is "I", at the left. 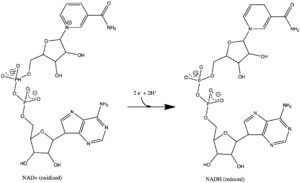 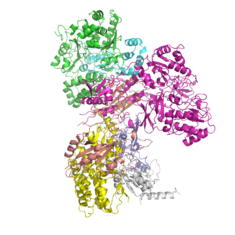 The structure of the peripheral domain of a NADH dehydrogenase related protein; bacterial FMN dehydrogenase PDB 2FUG. This structure omits a large transmembrane domain, which lies to the bottom of the image and extends to the right. This section of the complex lies in the mitochondrial matrix. 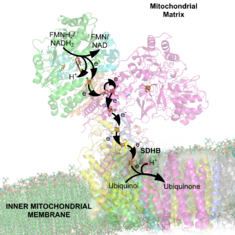 The electron carriers of the NADH dehydrogenease complex. Seven primary iron sulphur centers lie in a line down the peripheral arm of the complex to carry electrons from the site of NADH dehydration to ubiquinone. The iron sulphur group on the right is not found in the eukaryotic complex. Note: This image includes two errors. At the top, it should indicate NADH → NAD+ via a FMN electron carrier/cofactor. At the bottom, it should indicate Ubiquinone → Ubiquinol.

The reaction of NADH dehydrogenase is:

In this process, the complex translocates four protons across the inner membrane per molecule of oxidized NADH, helping to build the electrochemical potential used to produce ATP.

The reaction can be reversed - referred to as aerobic succinate-supported NAD+ reduction - in the presence of a high membrane potential, but the exact catalytic mechanism remains unknown.[4]

Complex I may have a role in triggering apoptosis.[5] In fact, there has been shown to be a correlation between mitochondrial activities and programmed cell death (PCD) during somatic embryo development.[6]

All redox reactions take place in the extramembranous portion of NADH dehydrogenase. NADH initially binds to NADH dehydrogenase, and transfers two electrons to the flavin mononucleotide (FMN) prosthetic group of complex I, creating FMNH2. The electron acceptor - the isoalloxazine ring - of FMN is identical to that of FAD. The electrons are then transferred through the second prosthetic group of NADH dehydrogenase via a series of iron-sulfur (Fe-S) clusters, and finally to coenzyme Q (ubiquinone). This electron flow causes four hydrogen ions to be pumped out of the mitochondrial matrix. Ubiquinone (CoQ) accepts two electrons to be reduced to ubiquionol (CoQH2).[2]

NADH Dehydrogenase is the largest of the respiratory complexes. In mammals, the enzyme contains 45 separate polypeptide chains. Of particular functional importance are the flavin prosthetic group (FMN) and eight iron-sulfur clusters (FeS). Of the 45 subunits, seven are encoded by the mitochondrial genome.[7][8]

The structure is an "L" shape with a long membrane domain (with around 60 trans-membrane helices) and a hydrophilic peripheral domain, which includes all the known redox centres and the NADH binding site. Whereas the structure of the eukaryotic complex is not well characterised, the peripheral/hydrophilic domain of the complex from a bacterium (Thermus thermophilus) has been crystallised (PDB 2FUG).[9]

A recent study by Roessler et al. (2010) used electron paramagnetic resonance (EPR) spectra and double electron-electron resonance (DEER) to determine the path of electron transfer through the iron-sulfur complexes, which are located in the hydrophilic domain. Seven of these clusters form a chain from the flavin to the quinone binding sites; the eighth cluster is located on the other side of the flavin, and its function is unknown. The EPR and DEER results suggest an alternating or “roller-coaster” potential energy profile for the electron transfer between the active sites and along the iron-sulfur clusters, which can optimize the rate of electron travel and allow efficient energy conversion in Complex I.[10]

A simulational study by Hayashi and Stuchebrukhov further identified the electron tunneling pathways in atomic resolution based on the tunneling current theory. The distinct pathways between neighboring Fe/S clusters primarily consist of two cysteine ligands and one additional key residue, which was supported by sensitivity of simulated electron transfer rates to their mutations and their conservation among various complex I homologues from simple bacteria to human beings. This result shows that the crucial part of complex I developed for optimal efficiency with specific key residues during early stages of the biological evolution and has been conserved since then. Internal water between protein subunits was identified as an essential mediator enhancing the overall electron transfer rate to achieve physiologically significant value.[11][12]

The best-known inhibitor of Complex I is rotenone (commonly used as an organic pesticide). Rotenone and rotenoids are isoflavonoids occurring in several genera of tropical plants such as Antonia (Loganiaceae), Derris and Lonchocarpus (Faboideae, Fabaceae). There have been reports of Indians using rotenone-containing plants to fish - due to its ichthyotoxic effect - as early as the 17th century.[13] Rotenone binds to the ubiquinone binding site of Complex I as well as piericidin A, another potent inhibitor with a close structural homologue to ubiquinone.

Despite more than 50 years of study of NADH dehydrogenase, no inhibitors blocking the electron flow inside the enzyme have been found. Hydrophobic inhibitors like rotenone or piericidin most likely disrupt the electron transfer between the terminal FeS cluster N2 and ubiquinone. It has been shown that long-term systemic inhibition of Complex I by rotenone can induce selective degeneration of dopaminergic neurons.[14]

NADH dehydrogenase is also blocked by adenosine diphosphate ribose - a reversible competitive inhibitor of NADH oxidation by binding to the enzyme at the nucleotide binding site.[15] Both hydrophylic NADH and hydrophobic ubiquinone analogs act at the beginning and the end of the internal electron-transport pathway, respectively.

The acetogenin family are the most potent Complex I inhibitors. They have been shown to crosslink to the ND2 subunit, which suggests that ND2 is essential for quinone-binding.[1] Interestingly, Rolliniastatin-2, an acetogenin, is the first Complex I inhibitor found that does not share the same binding site as rotenone.[16]

The catalytic properties of eukaryotic Complex I are not simple. Two catalytically and structurally distinct forms exist in any given preparation of the enzyme: one is the fully competent, so-called “active” A-form and the other is the catalytically silent, dormant, “de-activated”, D-form. After exposure of idle enzyme to elevated, but physiological temperatures (>30°C) in the absence of substrate, the enzyme converts to the D-form. This form is catalytically incompetent but can be activated by the slow reaction (k~4 min−1) of NADH oxidation with subsequent ubiquinone reduction. After one or several turnovers the enzyme becomes active and can catalyse physiological NADH:ubiquinone reaction at a much higher rate (k~104 min−1). In the presence of divalent cations (Mg2+, Ca2+), or at alkaline pH the activation takes much longer.

The high activation energy (270 kJ/mol) of the deactivation process indicates the occurrence of major conformational changes in the organisation of the Complex I. However, until now, the only conformational difference observed between these two forms is the number of cysteine residues exposed at the surface of the enzyme. Treatment of the D-form of complex I with the sulfhydryl reagents N-Ethylmaleimide or DTNB irreversibly blocks critical cysteine residue(s), abolishing the ability of the enzyme to respond to activation, thus inactivating it irreversibly. The A-form of complex I is insensitive to sulfhydryl reagents.

It was found that these conformational changes may have a very important physiological significance. The de-active, but not the active form of Complex I was susceptible to inhibition by nitrosothiols and peroxynitrite.[17] It is likely that transition from the active to the deactive form of complex I takes place during pathological conditions when the turnover of the enzyme is limited at physiological temperatures, such as during hypoxia, or when the tissue nitric oxide:oxygen ratio increases (i.e. metabolic hypoxia).[18]

Recent investigations suggest that Complex I is a potent source of reactive oxygen species.[19] Complex I can produce superoxide (as well as hydrogen peroxide), through at least two different pathways. During forward electron transfer, only very small amounts of superoxide are produced (probably less than 0.1% of the overall electron flow).[19][20]

During reverse electron transfer, Complex I might be the most important site of superoxide production within mitochondria, with up to 5% of electrons being diverted to superoxide formation. Reverse electron transfer, the process by which electrons from the reduced ubiquinol pool (supplied by succinate dehydrogenase, glycerol-3-phosphate dehydrogenase, or dihydro-oorotate dehydrogenase in mammalian mitochondria) pass through Complex I to reduce NAD+ to NADH, driven by the inner mitochondrial membrane potential electric potential. Although it is not precisely known under what pathological conditions reverse-electron transfer would occur in vivo, in vitro experiments indicate that it can be a very potent source of superoxide when succinate concentrations are high and oxaloacetate or malate concentrations are low.[21]

Superoxide is a reactive oxygen species that contributes to cellular oxidative stress and is linked to neuromuscular diseases and aging.[22] NADH dehdyrogenase produces superoxide by transferring one electron from FMNH2 to oxygen (O2). The radical flavin leftover is unstable, and transfers the remaining electron to the iron-sulfur centers. Interestingly, it is the ratio of NADH to NAD+ that determines the rate of superoxide formation.[23]

Mutations in the subunits of Complex I can cause mitochondrial diseases, including Leigh syndrome. Point mutations in various Complex I subunits derived from mitochondrial DNA (mtDNA) can also result in Leber's Hereditary Optic Neuropathy. There is some evidence that Complex I defects may play a role in the etiology of Parkinson's disease, perhaps because of reactive oxygen species (Complex I can, like Complex III, leak electrons to oxygen, forming highly toxic superoxide).

Although the exact etiology of Parkinson’s disease is unclear, it is likely that mitochondrial dysfunction, along with proteasome inhibition and environmental toxins, may play a large role. In fact, the inhibition of Complex I has been shown to cause the production of peroxides and a decrease in proteasome activity, which may lead to Parkinson’s disease.[24] Additionally, Esteves et al. (2010) found that cell lines with Parkinson’s disease show increased proton leakage in Complex I, which causes decreased maximum respiratory capacity.[25]

Exposure to pesticides can also inhibit Complex I and cause disease symptoms. For example, chronic exposure to low levels of dichlorvos, an organophosphate used as a pesticide, has been shown to cause liver dysfunction. This occurs because dichlorvos alters Complex I and II activity levels, which leads to decreased mitochondrial electron transfer activities and decreased ATP synthesis.[28]

The following is a list of humans genes that encode components of the NADH dehydrogenase (ubiquinone) complex: