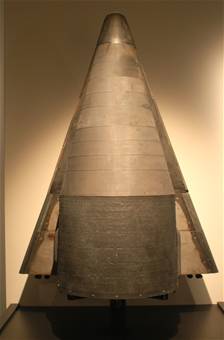 ASSET, or Aerothermodynamic Elastic Structural Systems Environmental Tests was an experimental US space project involving the testing of an unmanned subscale reentry vehicle.

Begun in 1960, ASSET was originally designed to verify the superalloy heatshield of the prior to fullscale manned flights. The vehicle's biconic shape and low delta wing was intended to represent Dyna-Soar's forward nose section, where the aerodynamic heating would be the most intense; in excess of an estimated 4,000-deg.F at the nosecap.Following the X-20 program's cancellation in December 1963, completed ASSET vehicles were used in reentry heating and structural investigations in the hopes that data gathered would be useful for the development of future space vehicles, such as the .

Built by , each vehicle was launched on a suborbital trajectory from Cape Canaveral's Pad 17B at speeds of up to 6,000 m/s before making a water landing in the South Atlantic near . Originally, a Scout launch vehicle had been planned for the tests, but this was changed after a large surplus of Thor and Thor-Delta missiles returned from the became available.

Of the six vehicles built, only one was successfully recovered and is currently on display at the in .

In the mid-1960s, proposed a variant of the Gemini capsule which retained the original spacecraft's internal subsytems and crew compartment, but which dispensed with the tail-first ballistic reentry, parachute recovery and water landing.

Instead, the vehicle would be heavily modified externally into an ASSET-like lifting-reentry configuration. Post-reentry, a pair of stowed swing-wings would be deployed, giving the spacecraft sufficient L/D to make a piloted glide landing on a concrete runway using a skid-type landing gear (reinstated from the planned, but cancelled paraglider landing system), much like today's Space Shuttle.

According to Mark Wade's Encyclopedia Astronautica, the intent seems to have been to field a manned military spaceplane at a minimal cost following the cancellation of the Dyna-Soar program.