Flip Skateboards is an US based international skateboard company, owned by Jeremy Fox, Ian Deacon and . The company manufactures skateboard decks, wheels and clothing. Flip is distributed by Blitz Distribution in the US.

Flip Skateboards originally started in the UK in the 1980's as Deathbox Skateboards (later to be named Flip in 1994). The original name 'Deathbox' is a term used for the swimming pool overflow channel in the form of backyard pool skating.

Flip moved from the UK to California in 1994, (although the team at the time, , , , and Andy Scott moved in 95) and went on to become one of the world's biggest and most well known skateboard companies.

Four members have won the prestigious Thrasher Skater of the Year Award: in 1997 (though he was sponsored by Anti-Hero at the time), in 2000, in 2001, and in 2003 and winning best street skater in transworld skateboarding magazine.

Flip has a team, with skate veterans such as , , , street skate legends such as , and , ( left the team and moved to the Alien Workshop team in 2008) and two legendary vert skaters by the name of and .

On March 7, 2007, Flip Skateboards amateur Shane Cross was killed in a fatal motorcycle accident in Melbourne, Australia. Ali Boulala was driving the motorcycle with Shane Cross on the back when the pair hit a curb. Ali Boulala was sentenced to 4 years in Australian prison for the accident. [Cite news
url=http://www.news.com.au/heraldsun/story/0,21985,23594837-2862,00.html
title=Deadly ride leads to jail for skateboarder
date=2008-04-25
author=Hadfield, Shelley
work=
place=Melbourne]

In 2008 David Gonzalez became pro for the team. 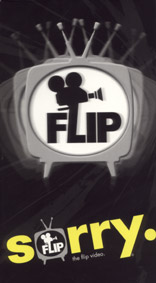 Flip is currently filming their third team video, "Extremely Sorry", which is due out in the summer of 2008.