Howard Victor Chaykin (born October 7, 1950)[2] is an American comic book writer and artist famous for his innovative storytelling and sometimes controversial material. Chaykin’s main influences are the mid-20th Century book illustrators Robert Fawcett, Al Parker, and others, along with a love for jazz, which is often reflected in his work.

Howard Chaykin began his career in comics as an assistant to such artists as Gil Kane and Neal Adams before going solo. His first major work was for DC Comics drawing a comics adaptation of Fafhrd and the Gray Mouser in Sword of Sorcery. Although the title was well received, it lasted only five issues before cancellation. Chaykin also drew the character Ironwolf in the science fiction anthology title Weird Worlds for DC. Moving to Marvel Comics, he began work as co-artist with Neal Adams on the first Killraven story, seen in Amazing Adventures #18 in 1973. 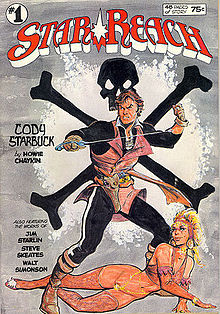 After this, Chaykin was given various adventure strips to draw for Marvel, including his own creation, Dominic Fortune (inspired by his Scorpion character, originally drawn for Atlas Comics), now in the pages of Marvel Premiere. In 1978, he also wrote and drew his Cody Starbuck creation for the anthology title Star Reach, one of the first independent titles of the 1970s. These strips saw him explore more adult themes as best he could within the restrictions often imposed on him by editors and the Comics Code Authority. The same year, he produced for Schanes & Schanes a six-plate portfolio showcasing his character.

In 1976, Chaykin landed the job of drawing the Marvel Comics adaptation of the first Star Wars film, written by Roy Thomas. This proved to be a massive success for Marvel, but Chaykin left after ten issues to work in more adult and experimental comics, as well the more lucrative field of paperback book covers.

In the next few years he produced material for Heavy Metal, drew a graphic novel adaptation of Alfred Bester’s The Stars My Destination, and produced illustrations for works by Roger Zelazny. Chaykin also collaborated on two original graphic novels — Swords of Heaven, Flowers of Hell with writer Michael Moorcock, and Empire with Samuel R. Delany — and found time to move into film design with work on the movie version of Heavy Metal.

Chaykin went back to Cody Starbuck with a story in Heavy Metal between May and September 1981, in the same painted art style he'd used for the Moorcock graphic novel. 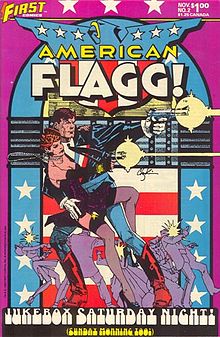 In 1983, Chaykin launched American Flagg! for First Comics. With Chaykin as both writer and artist, American Flagg! was successful for First and proved highly influential. Chaykin mixed all his previous ideas and interests—jazz, pulp adventure, science fiction and sex—into American Flagg!. For American Flagg!, Chaykin made wide use of Craftint Duoshade illustration boards, which in the period before computers, allowed him to add a shaded texture to the finished art.[4]

After the first 26 issues of American Flagg!, Chaykin started work on new projects. Chaykin’s involvement in his original run of the series was that of writer for 29 issues, interior artist for issues 1-12 and 14-26, and cover artist for issues 1-33. He returned to full art and writing duties just for the American Flagg! Special one-shot in 1986. In 1989, a four-issue run was released, then the title was cancelled and relaunched as Howard Chaykin’s American Flagg!. This new rendition failed to recapture the glory days of the title’s early years and only lasted 12 issues before cancellation.

In the late 1970s, Chaykin, Walt Simonson, Val Mayerik, and Jim Starlin formed Upstart Associates, a shared studio space on West 29th Street in New York City. The membership changed over time: Mayerik left to move back to Ohio, and Jim Sherman took his place. Then Jim Starlin moved upstate, and Frank Miller replaced him. That group remained stable for several years, until Miller left in the early 80s.[5] During this period, first Joe Jusko,[6] then Peter Kuper, and then Dean Haspiel (while still in high school), served as Chaykin's studio assistants. Haspiel worked on American Flagg!, occasionally helping Simonson on Thor as well. Chaykin moved out to the West Coast in around 1986, leaving Simonson to close Upstart Associates a few years later.[citation needed]

The first new project was a controversial revamp of The Shadow in a four-issue mini-series for DC Comics in 1986. Rather than setting the series in its traditional 1930s milieu, Chaykin updated it to a contemporary setting and included his own style of extreme violence.

The American Flagg! Special one-shot was designed to introduce Chaykin's next major work, a graphic novel series called Time². The work—combining semi-autobiographical elements with a heavy dose of jazz, film noir and a fantasy version of New York City—resulted in two graphic novels (Time2: The Epiphany (ISBN 0-915419-07-6) and Time2: The Satisfaction of Black Mariah (ISBN 0-915419-23-8)).

During a 1987 interview originally published in Amazing Heroes #132, Chaykin described plans for a third graphic novel. "It's probably going to be grossly different from the first two, because I'm taking things in another direction," Chaykin said at the time. "I want to do a story that is both very funny ... and at the same time very, very ugly. Really nasty and unpleasant. Because frankly, it's the place to do that sort of thing."[7]

Although Chaykin hoped it would be available in summer 1988, the third book was never released.

Chaykin has described Time2 as one of his favorites among his own output. "To tell you the truth, my first interest would be to do another Time2 because that was a very personal product for me," he said in a 2008 interview. "It's a fantasia of my family's story."[8]

Before Chaykin returned to American Flagg!, he revamped another DC Comics character: Blackhawk was a three-issue mini-series that gave Chaykin another chance to indulge in the 1930s milieu, proving itself another successful revamping of a defunct DC character.

Chaykin also protested DC’s proposed system of labelling comics for violent or sexual content; Chaykin (with Alan Moore, and Frank Miller) boycotted DC and refused to work for the company. In Chaykin’s case, the boycott would only last until the early 1990s.

In 1988, Chaykin created perhaps his most controversial title: Black Kiss, a 12-issue series published by Vortex Comics which contained his most explicit depictions of sex and violence yet. Telling the story of sex-obsessed vampires in Hollywood, Black Kiss pushed the boundaries of what could be shown in mainstream comics. Even though Black Kiss shipped sealed in an "adults only" clear plastic bag, its content drew much criticism. This did not stop it from selling well enough for Chaykin to describe it as "probably, on a per-page basis, the most profitable book I've ever done."[9]

Chaykin returned to DC to write a three-issue prestige format mini-series called Twilight, drawn by José Luis García-López, in a style blending Chaykin's storytelling and García-López's elegant line art. This was another radical revamp of DC characters—this time, DC’s science fiction heroes from the 1950s and 1960s, such as Tommy Tomorrow and Space Cabby. He then co-created/designed Firearm for Malibu Comics in 1993. This was followed by the four-issue miniseries Power and Glory in 1994, a superhero-themed PR satire for Malibu Comics' creator-owned Bravura imprint. It was optioned for film production, but was never made into a movie.[citation needed]

In 1996, DC’s Helix imprint published Cyberella, a cyberpunk dystopia written by Chaykin and drawn by Don Cameron. Although it was not intended as a limited series, Helix decided to end the relatively poor-selling title at twelve issues.[citation needed]

Chaykin began to drift out of comics by the mid-1990s. With the exception of several Elseworlds stories he wrote for DC Comics, including Batman: Dark Allegiances which he wrote and drew in 1996, his comic output became minimal as he became more involved in film and television work. He was executive script consultant for The Flash television series on CBS,[10] and later worked on action-adventure programs such as Viper[11], Earth: Final Conflict[12] and Mutant X.[13]

Near the end of the decade, Chaykin started to drift back into comics and co-wrote with David Tischman the three-issue mini-series Pulp Fantastic for the Vertigo imprint of DC, with art by Rick Burchett. Pulp Fantastic was part of Vertigo’s celebrations for the new Millennium, and although it never sold well,[citation needed] it would see the start of Chaykin becoming more involved with comics over the next few years. 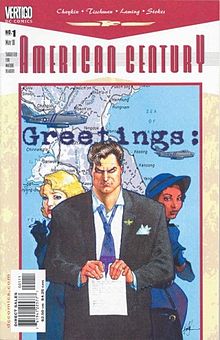 Chaykin began co-writing American Century with David Tischmann for Vertigo.[14] This story, set in post-war America, would be a pulp-adventure strip inspired by the likes of Terry and the Pirates as well as the EC Comics war stories created by Harvey Kurtzman. That year, Chaykin became part of the creative team on Mutant X, a television series inspired by the Marvel Comics series of mutant titles.

His next work was Mighty Love, a 96-page original graphic novel published in 2004 and described as "You’ve Got Mail with super-powers".[15] This was acclaimed as a return to the type of work he did on American Flagg! and contained his first art in a title since the early 1990s.

That year, Chaykin and Tischmann revamped Challengers of the Unknown in a six-issue mini-series for DC, as well as writing a mini-series about gangster vampires called Bite Club for Vertigo.[14] The pair also wrote Barnum!: In Secret Service to the USA, a graphic novel in which real-life showman P.T. Barnum comes to the aid of the U.S. government.

In 2005, Chaykin produced the six-part City of Tomorrow, a DC/Wildstorm production involving a futuristic city populated by gangster robots. Chaykin described the mini-series as "The Untouchables meets West World at Epcot."[16] Also for Wildstorm that year, he wrote the four-issue mini-series Legend updating the character Hugo Danner.

He also illustrated 24 College Ave., a story serialized online in 54 chapters for ESPN.com’s Page 2 section. ESPN.com columnist Jim Caple wrote the text, each episode of which was accompanied by a single-panel Chaykin drawing.[17]

In 2006, he began working on his first superhero title for DC Comics, pencilling Hawkgirl, with Walter Simonson writing, starting with issue 50.[5] With issue 56, he stopped drawing the series, mainly to get time to work on Marvel’s Blade with Marc Guggenheim, although he continued to draw Hawkgirl covers for a few issues.

After Blade was cancelled with issue 12, he pencilled issue 50 of Punisher, Wolverine (vol. 3) #56-61, Punisher War Journal (vol. 2) (#16-24) and an issue of Immortal Iron Fist. Chaykin has also illustrated the 2008 Marvel MAX comic War Is Hell: The First Flight of the Phantom Eagle, scripted by Garth Ennis. He wrote Supreme Power #1-12 for Marvel. In 2009, he wrote and penciled Dominic Fortune.

In 2010 he wrote Die Hard: Year One, a comic about John McClane from the Die Hard series for Boom! Studios.[18] Marvel in June 2010 published a Rawhide Kid mini-series drawn by Chaykin and written by Ron Zimmerman.[19]

Marvel Comics in 2011 announced Chaykin would write and draw a five-part miniseries, Avengers 1959, a spinoff of a storyline first introduced in The New Avengers. The first issue is scheduled for an October 2011 release.[20]

His work as an artist (interior pencil art, except where noted) includes: