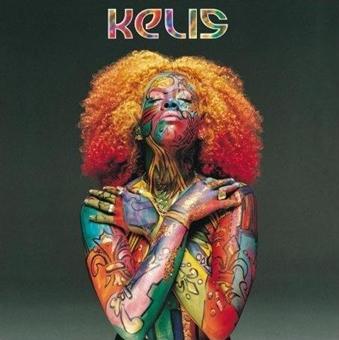 The album is entirely produced by . In the U.S. "" was a modest urban radio success and a /BET video hit. The album debuted at number number one hundred and forty-four on the "Billboard" 200 and number twenty-three on the , selling 12,423 copies in the opening week. The album has sold just over 250,000 units in the U.S according to .

"Kaleidoscope" fared better in , where all three singles, "Caught out There", "Good Stuff", and "" were sizable hits. The BPI certified "Kaleidoscope" gold for selling over 100,000 copies in the . Kelis' colorful style in both clothing and hair in the music videos with bright contrasting colors combining an urban style while maintaining received considerable attention. The exclusively European positive reception was also attributed to the reluctance of her native U.S. to accept Kelis due to her first single "Caught out There" containing a seemingly furious Kelis and the album featuring tracks like "Mafia", about the gangsta culture, and "Ghetto Children", about domestic abuse.

"Caught out There" managed to provide Kelis with a number-fifty-two chart entry on the on imports and it was therefore decided to release the single there which peaked at number four. "Good Stuff" also proved a modest hit securing a number-nineteen position on the UK chart. The third and final single from the album, "Get Along with You", was her first and only solo release to miss the top forty, reaching number fifty-one.