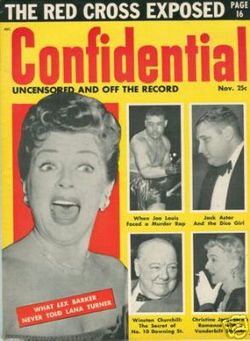 Confidential was a periodical published quarterly from December 1952 to August 1953, and then bi-monthly until 1978. It was founded by Robert Harrison and is considered a pioneer in scandal, gossip, and exposé journalism. Newsweek said it featured "sin and sex with a seasoning of right wing politics".[1]

Its journalism consisted just as much of innuendo as of exposés. For example, the magazine alleged that Bing Crosby was a wife beater and that Rock Hudson and Liberace were homosexuals ("Lavender Lads"), and made public the fact that Robert Mitchum had been charged with smoking marijuana. Apart from spreading gossip and outing homosexuals, Confidential combined its exposés with a conservative agenda especially targeted at those who sympathized with the political left and at celebrities that it claimed were engaged in inter-racial affairs.

Humphrey Bogart described its popularity: "Everybody reads it but they say the cook brought it into the house."[2]

Robert Harrison is said to have come up with the idea for Confidential while watching the senate hearings on organized crime conducted by Tennessee senator Estes Kefauver in the early 1950s.[2] The popular hearings had higher ratings than many television shows because they exposed the underworld of the USA, with mafia bosses who had colourful nicknames, lavish lifestyles and private lives full of scandalous details. Harrison knew he couldn’t target the mob without personal protection, and instead turned to the world of movies. Hollywood was a similar environment that seemed to live by its own laws, and was known for the same glamorous lifestyles filled with promiscuity and temptations.

To gather material for his new magazine, Harrison established an organization called Hollywood Research Inc. in Los Angeles, operated by his niece Marjorie Meade, which has been described as "a spy network of hack journalists, private investigators, waiters, call girls, and 75-dollars-a-week starlets who were on the rosters of the major studios and were going nowhere except to bed with anyone who might boost their careers."[2] These characters tended to know what the movie stars did in their spare time and thus got a chance of making some money by informing Confidential.

Since his earlier time in the newspaper business in New York, Harrison had contact with the famous gossip columnist Walter Winchell. In the first Confidential issue Winchell was honoured with a submissive article. Winchell then went on to secretly collaborate with Confidential, passing on rumours that were unprintable in the serious press and giving publicity to the new magazine in his nation-wide, syndicated column.[2]

New techniques also contributed to the development of gossip magazines. Surveillance equipment had become smaller so that cameras and listening devices could be installed without an immediate risk of discovery.

Confidential's technique for the writing of an article was also innovative. In 1955 Time described the journalistic approach: "By sprinkling grains of fact into a cheesecake of innuendo, detraction and plain smut, Confidential creates the illusion of reporting the 'lowdown' on celebrities. Its standard method: dig up one sensational ‘fact’ and embroider it for 1,500 to 2,000 words. If the subject thinks of suing, he may quickly realize that the fact is true, even if the embroidery is not. […] The magazine specializes in finding one black mark in a subject's distant past, and hammering him with it..."[3]

The first issue was published in 1952 under the headline "The Lid is Off!". Under the slogan "Tells the Facts and Names the Names" Confidential soon became the fastest growing magazine in the U.S. After only a couple of issues the magazine claimed its circulation was four million copies.[4][3] As each copy was reckoned to be read by ten persons this meant that the publication reached every fifth American if Confidential's own figures were accurate). Robert Harrison was estimated to make half a million dollars per issue.

By July 1955, TIME was decrying Confidential's success: "In a little more than two years, a 25¢ magazine called Confidential, based on the proposition that millions like to wallow in scurrility, has become the biggest newsstand seller in the U.S. Newsmen have called Confidential ("Tells the Facts and Names the Names") everything from "scrawling on privy walls" to a "sewer sheet of supercharged sex." But with each bimonthly issue, printed on cheap paper and crammed with splashy pictures, Confidential's sale has grown even faster than its journalistic reputation has fallen."[3]

Confidential was based in New York and could therefore not be silenced by the movie industry by bribing anyone in California. The images the movie companies carefully had groomed for certain stars, were ruined overnight by articles in Confidential. To limit the damage done to their investments, the film industry started to tip off Confidential of the more innocent gossip, which also made for good publicity for coming movies.

Some lesser stars also collaborated with Confidential to produce smaller scandals in order to create interest in themselves. Some of the actors of the day had their careers ruined not by Confidential, but by their own employers. After a while the gossip magazine required larger and larger “sacrifices” and the movie moguls were forced to "sell out" lesser known actors in order to draw negative attention away from their major stars. The homosexual actor Rock Hudson was left alone for a while because Confidential got a tip about Rory Calhoun instead, whose background included armed robberies when Calhoun was thirteen years old.

The development became intolerable for the film industry as Confidential and other gossip magazines demanded more and more sacrifices. Nobody was safe from Confidential's scrutiny, and the articles hurt the stars whether the allegations were true or not.

Among the political figures targeted by the magazine were Under Secretary of State Sumner Welles[5] and Eisenhower's appointee to be Appointments Secretary Arthur H. Vandenberg, Jr., both in 1956.[6] 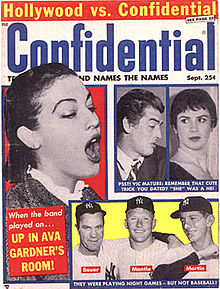 Even if not that many of the articles resulted in lawsuits, some stars were forced to sue in order to try to save their reputations and careers. At one time Confidential had pending lawsuits that amounted to twelve million dollars in damages. But the magazine got away with a lot more as the celebrities didn’t want to draw attention to the articles.

In 1957 Hollywood tried to stop the gossip mongering and convinced the California Attorney-General to charge Robert Harrison with "conspiracy to publish criminal libel."[1] The star witness for the prosecution was Howard Rushmore,[7] an ex-reporter at the Communist Daily Worker and former member of CPUSA who was hired as an editor by Confidential in October 1954.

When the trial started Defense Attorney Arthur J. Crowley subpoenaed hundreds of Hollywood stars as witnesses which turned out to be a stroke of genius for the marketing of the scandal magazine.[8] At the beginning of the trial the defence started reading the juiciest magazine pieces into the court record. This meant that the libelous stories could be re-printed by the more serious press, the worst possible development for the film industry.

At the end of the trial the jury was sequestered at the luxurious Mayflower Hotel. The jury set a new state record in deliberation time while enjoying Mayflower’s amenities. After 15 days it was declared that the jury could not reach a verdict.

A re-trial was scheduled but by then the film industry had had enough. Hollywood started wielding behind-the-scenes pressure by threatening to withhold campaign contributions for local politicians and after ten days the judge declared that there would be no new trial. A deal was struck between Harrison and the film industry that stated that the charges were dropped in exchange for leaving the movie stars alone.

Confidential after the trial

The deal became the effective end of the magazine as it became deprived of printing the juiciest gossip. Legal problems led to format and subject matter changes that in turn reduced circulation to less than a third of what it was at its heyday.[9] Eventually Harrison settled with all individuals who had charged him with libel to salvage the income he had during six profitable years. By May 1958, Harrison sold the magazine to a group led by Hy Steirman. Confidential went through a number of further changes in format and ownership and eventually ceased publication entirely in 1978.[1] 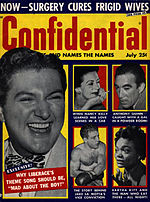 Due to Confidential's success, and the large amount of revenue it generated, competing magazines soon were created – Hush-Hush, Uncensored, Naked Truth, Rave, Private Affairs, Revealed, Side Street, Exposed, The Lowdown, Exclusive, Blast, Inside, On the Q.T. All of these magazines had striking slogans in the Confidential tradition: "Uncensored And Off The Record", "What You Don’t Know About The People You Know", "Stories The Newspapers Won’t Print!", “All The Facts...All The Names”. Even Confidential recycled their own articles in Whisper, one of Robert Harrison’s other publications.

Portrayal in other media