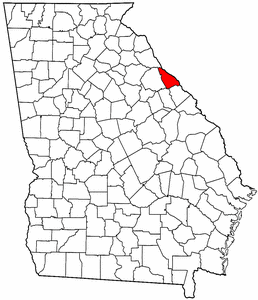 Lincoln County High School, its only high school, is also home to Georgia's winningest coach in high school football, Larry Campbell. As of December 2007, Campbell is ranked 3rd in the nation for wins. The school also has achieved many awards and titles in debate and literary competitions; and continues to do well in all aspects of life.

Lincoln County consists of convert|186240|acre|km2. It is a rare known fact, but on January 22, 1852 the legislature changed the location of the Wilkes County and Lincoln County line. There is no record as to why the legislature made these changes. Some say it was because of a man by the name of R.O. Barksdale, but no one really knows why.Before the revolutionary war Lincoln county was primarily a farming and agricultural area. Until the 1950s a lot of that changed due to the development and creation of Clarke Hill dam which backed up a large portion of water over Lincoln county and other near by counties. This brought in developers, and in turn many, many neighborhoods and subdivisions.

On February 20, 1796 Lincoln County became the twenty fourth county in the state of Georgia. Before then, it was part of Wilkes County which is, presently, just west of Lincoln County. Lincoln County was named after an American patriot, General Benjamin Lincoln. A Revolutionary War hero, Lincoln was born in Hingham, Massachusetts in 1733. Lincoln was made most famous by receiving Gen. Cornwallis's Sword of Surrender at Yorktown, VA to end the war. In 1809 he retired and soon died in 1810.

Since the creation of Clarke’s Hill Lake, recreation has been a huge part of Lincoln County's growth. It is attributed to be a main reason of tourism in Lincoln county. Clarke’s Hill Lake provides great fishing, boating, and other water sports for visitors and those who live near and around the lake. Lincoln County borders about convert|380|sqmi|km2 of shoreline on Clarke’s Hill Lake. Toward the eastern part of Lincoln County, just before the South Carolina line, sits Elijah Clarke State Park. This park is roughly convert|447|acre|km2, and attracts many visitors throughout the year. In May of every year, Elijah Clarke State Park holds a bluegrass festival, which has become a big attraction for the town in the last twenty years. Several very well known bluegrass musicians come to this event to play every year, including Lincoln County natives, The Lewis Family. The Lewis Family travels all around the world throughout the year on tour. Also held every year at Elijah Clarke State park is an Arts and Crafts Festival and a Log Cabin Christmas. Both are held in the month of October.

There are many historic places to visit in Lincoln County. Some of these include:
*Lamar-Blanchard House
*The Lincoln County Historical Park
*Graves Mountain

The growth of economy in Lincoln county is due to many things. In the last fifty years Strom Thurmond Dam, which created Clarks Hill Lake, has played a big part in this. The main business that has boomed in the past years is logging. In Lincoln County, logging is a multi million dollar industry. There are over twenty logging business in our small community which produce most of the jobs for Lincoln County residences.

- Former NFL player, pro bowler, comeback player in 1995 and 2001. He has played for the Arizona Cardinals, San Francisco 49ers , Denver Broncos, and then retired in 2005 from the Atlanta Falcons due to injuries. He is considered to be one of the best NFL running backs of all time. First person to be put on the front of the video game Madden.

- Former NFL player, played for the Cincinnati Bengals and then the Tampa Bay Buccaneers where he retired soon after that.

- famous family bluegrass and gospel band , have won numerous music awards, in 1992 they were inducted into Georgia Music Hall of Fame, album of the year in bluegrass and gospel numerous times. Jeff and Sherri Easter are a world wide Christian singing couple. They also call Lincolnton, Georgia their home.