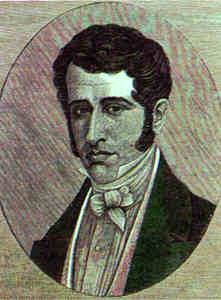 José Luis Álvaro Alvino Fernández Madrid (, - , ) was a Neogranadine statesman, physician, scientist and writer, who was President of the interim of the in 1814, and President of the United Provinces of the New Granada in 1816. After the Reconquista, he was barred from the country and was exiled in , where he continued his scientific studies and worked as a doctor. He was later pardoned and allowed to come back to , and was appointed ambassador to and to the where he died in 1830.

José Fernández Madrid was born in , Bolívar on , . Son of a wealthy aristocratic family of the New World, his father Pedro Fernández de Madrid y Rodríguez de Rivas, was born in and held important positions in the as a sub delegate of the . His paternal grandfather, don Luis Fernández Madrid was a of the and a member of the Council to the King of Spain, and in the New World, served as "Oidor", or head judge, of the Royal Audiencies of , and . His mother was doña Gabriela Fernández de Castro, daughter of don Diego Fernández de Castro who served as governor, , and president of the Royal Audiency of Guatemala ["Fernández de Castro, JA. Un presidente neogranadino desterrado en la isla de Cuba. Rev Univ de La Habana 1942;40-42 (enero-junio):7-26"] .

He began his studies in , but his father was named Superintendent of the , and so the family moved to , where he continued his studies in the , in Bogotá. He initially graduated from his studies in and , but he went back to finish his in , graduating on , all before the age of 20 ["Universidad de La Habana. Archivo Histórico. Exped Est Ant No. 4426 (Dr. José Fernández Madrid)"] .

Amidst the revolutionary events of 1810, José Fernández found himself in Cartagena, where he got his first job as for the Province of Cartagena, here he was part of the first revolutionary movements of the city when the Province of Cartagena declared their absolute independence on , . He was later named representative to the Congress of the State of Cartagena de Indias. In 1812 Fernández was commissioned as representative of his province in the Congress of the that was convened in . He excelled in Congress and was known for his intellect, and speeches, and his literary works gave him great standing image among his colleagues.

On , the Supreme Junta of the United Provinces decided that the best political solution for the country was to name a instead of a President to govern the country alone ["Osterling, J.P. (1989). Democracy in Colombia: Clientelist Politics and Guerrilla Warfare. New Brunswick: Transaction Publishers. [Rutgers University] ISBN 0887382290"] . Congress elected , , and to preside over the triumvirate, but since all of them were absent, congress named , and José Fernández Madrid, as interim presidents of the triumvirate. The Interim Triumvirate ruled the country from , . José Fernández Madrid presided over the triumvirate until , ["Biografia de José Fernández Madrid" [http://www.lablaa.org/blaavirtual/biografias/fernjose.htm] ] when Custodio García was able to step in power.

in 1816, the situation of the country was dire, the Pacificador was heading the Recnquista, he had taken the north of the country, the provinces of , and Cartagena had fallen to the Spaniards, independence was being taken away. Many important figures were abandoning the political scene, no one wanted to be in the way of Morillo.

On , , resigned from the presidency, then the Congress of the United Provinces of the New Granada asked Fernández Madrid to be the president of the United Provinces, he at first declined, knowing very well that he was not the right man for the job, and that he could not bring about a solution to the invasion, but upon pressure of his peers, he accepted and assumed the presidency ["CABALLERO, JOSÉ MARÍA, Particularidades de Santafe, Un diario de... en la Patria Boba, Bibliotecade Historia Nacional, Bogotá, Imprenta Nacional, 1902."] .

On , Santa Fe de Bogotá was invaded by the royalists, this event marked Spain's Reconquista of the New Granada.

So with only 27 years of age, and no military experience, Fernández Madrid marched with a handful of the remaining soldiers to the south. On , Fernández Madrid presented his resignation to the presidency in to the Permanent Legislative Commission, who accepted it and named general to the post, was named vicepresident, and becoming the acting president because Rovira was not present.

On , after the defeat of the battle of , the last battle of the Reconquista, Fernández Madrid and his wife are captured and taken prisoners in Chaparral while they were in search of the lands of the Indians to seek refuge

Then, captured and facing the real threat of Facin the Judges of War and Purification, who would have sentenced him to death as was the fate of many very important figures during the Reconquista, he plead for forgiveness, mistake he would later regret, he implored a meeting with general Morillo. Because of his family's record of service to the King, and his lack of military action, he was spared his life, and sentenced to exile in along with his wife, María Francisca Domínguez de la Roche, and his brother, coronel Francisco Fernández Madrid; Morillo told him,

::"Whitin three says you will march to the Court. Go learn loyalty from your relatives! Do not think you are fooling me, you are an insurgent and you will be one till death." ["RIVAS, RAIMUNDO, Escritos de don Pedro Fernández Madrid (Publicados con noticias sobre su vida u su época), Bogotá, Editorial Minerva, 1931."]

On , the first edition of the newspaper "El Argos" came out [http://www.cubaperiodistas.cu/efemerides/junio.html "Union de Periodistas de Cuba. Efemérides."] , it was founded by Fernández Madrid, it ran 34 editions and it had a revolutionary outlook and called for the unification of the peoples of America.

José Fernández Madrid was appointed to , he managed to

His son, , who was born in Cuba during his exile, became an important politician and writer, following in the steps of his father, he worked as a congressman and was president of the Congress in 1857 ["Pedro Fernández Madrid" [http://www.lablaa.org/blaavirtual/biografias/fernpedr.htm] ] .