Current loop
This article is about the electrical signaling schemes. For the oceanic phenomenon, see Loop current. 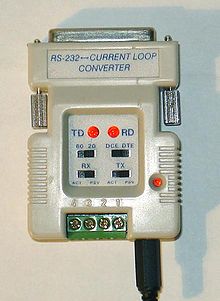 For digital serial communications, a current loop is a communication interface that uses current instead of voltage for signaling. Current loops can be used over moderately long distances (tens of kilometres), and can be interfaced with optically isolated links.

The maximum resistance for a current loop is limited by the available voltage. Current loop interfaces usually use voltages much higher than those found on an RS-232 interface, and cannot be interconnected with voltage-type inputs without some form of level translator circuit.

Analog current loops are used where a device must be monitored or controlled remotely over a pair of conductors. Only one current level can be present at any time.

Given its analog nature, current loops are easier to understand and debug than more complicated digital fieldbuses, requiring only a handheld digital multimeter in most situations. Using fieldbuses and solving related problems usually requires much more education and understanding than required by simple current loop systems.

Additional digital communication to the device can be added to current loop using HART Protocol. Digital process buses such as FOUNDATION Fieldbus and Profibus may replace analog current loops.

For industrial process control instruments, analog 4–20 mA and 10–50 mA current loops are commonly used for analog signaling, with 4 mA representing the lowest end of the range and 20 mA the highest. The key advantages of the current loop are that the accuracy of the signal is not affected by voltage drop in the interconnecting wiring, and that the loop can supply operating power to the device. Even if there is significant electrical resistance in the line, the current loop transmitter will maintain the proper current, up to its maximum voltage capability. The live-zero represented by 4 mA allows the receiving instrument to detect some failures of the loop, and also allows transmitter devices to be powered by the same current loop (called two-wire transmitters). Such instruments are used to measure pressure, temperature, flow, pH or other process variables. A current loop can also be used to control a valve positioner or other output actuator. An analog current loop can be converted to a voltage input with a precision resistor. Since input terminals of instruments may have one side of the current loop input tied to the chassis ground (earth), analog isolators may be required when connecting several instruments in series.

Panel mount displays and chart recorders are commonly termed 'indicator devices' or 'process monitors'. Several passive indicator devices may be connected in series, but a loop must have only one transmitter device and only one power source (active device).

The relationship between current value and process variable measurement is set by calibration, which assigns different ranges of engineering units to the span between 4 and 20 mA. The mapping between engineering units and current can be inverted, so that 4 mA represents the maximum and 20 mA the minimum.

Analog current loops were occasionally carried between buildings by dry pairs in telephone cables leased from the local telephone company. 4–20 mA loops were more common in the days of analog telephony. These circuits require end-to-end direct current (DC) continuity. DC continuity is not available over a microwave radio, optical fiber, or a multiplexed telephone circuit connection.

Basic DC circuit theory shows that the current is the same all along the line. It was common to see 4–20 mA circuits that had loop lengths in miles or circuits working over telephone cable pairs that were longer than ten thousand feet end-to-end. There are still legacy systems in place using this technology. In Bell System circuits, voltages up to 125 VDC were employed.

Discrete control functions can be represented by discrete levels of current sent over a loop. This would allow multiple control functions to be operated over a single pair of wires. Currents required for a specific function vary from one application or manufacturer to another. There is no specific current that is tied to a single meaning. It is almost universal that 0 mA indicates the circuit has failed. In the case of a fire alarm, 6 mA could be normal, 15 mA could mean a fire has been detected, and 0 mA would produce a trouble indication, telling the monitoring site the alarm circuit had failed. Some devices, such as two-way radio remote control consoles, can reverse the polarity of currents and can multiplex audio onto a DC current.

These devices can be employed for any remote control need a designer might imagine. For example, a current loop could actuate an evacuation siren or command synchronized traffic signals. 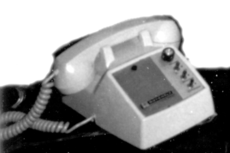 A Motorola T-1300 series remote control is built in a telephone housing. The dial is replaced with a speaker and volume control. This remote control uses a two-wire circuit to control a base station.

Current loop circuits are one possible way used to control radio base stations at distant sites. The two-way radio industry calls this type of remote control DC remote. This name comes from the need for DC circuit continuity between the control point and the radio base station. The purpose current loop remote control is to save the cost of extra pairs of wires between the operating point and the radio transceiver. Some equipment, such as the Motorola MSF-5000 base station, uses currents below 4 mA for some functions. An alternative type, the Tone remote, is more complex but requires only an audio path between control point and base station. To confirm the use of the phrase "DC remote" as accurate in describing this type of device, please see [1]. The patent does not describe this tone remote but confirms the use of the phrase to describe this system of signaling.

For example, a taxi dispatch base station might be physically located on the rooftop of an eight-story building. The taxi company office might be in the basement of a different building nearby. The office would have a remote control unit that would operate the taxi company base station over a current loop circuit. The circuit would normally be over a telephone line or similar wiring. Control function currents come from the remote control console at the dispatch office end of a circuit. In two-way radio use, an idle circuit would normally have no current present.

In two-way radio use, radio manufacturers use different currents for specific functions. Polarities are changed to get more possible functions over a single circuit. For example, imagine one possible scheme where the presence of these currents cause the base station to change state:

Note that this circuit is polarity-sensitive. If a telephone company cable splicer accidentally reversed the conductors, selecting channel 2 would lock the transmitter on.

Each current level could close a set of contacts, or operate solid-state logic, at the other end of the circuit. That contact closure caused a change of state on the controlled device. Some remote control equipment could have options set to allow compatibility between manufacturers. That is, a base station that was configured to transmit with a +18 mA current could have options changed to (instead) make it transmit when +6 mA was present.

In two-way radio use, AC signals were also present on the circuit pair. If the base station were idle, receive audio would be sent over the line from the base station to the dispatch office. In the presence of a transmit command current, the remote control console would send audio to be transmitted. The voice of the user in the dispatch office would be superimposed over the DC current that caused the transmitter to operate.