Moskal (Москаль, Moskalik,Moskal’) is a historical term and present day ethnic slur referring to Russians. It is primarily used as a slur in Ukraine, and Belarus.[1][2]

Text in Ukrainian: "Thank you God that I am not a Moskal"

Moskal can be a type of ethnic slur with a mild negative connotation. 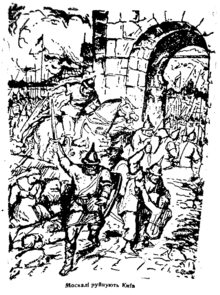 M.Fartukh "Moskali destroy Kiev", illustration from an 1934 history textbook (referring to the destruction of Kiev in 1169)

Moskal is a common Central and Eastern European surname.[4]