Cornerstone University is an independent, non-denominational Christian university in Grand Rapids, Michigan. The university emphasises the trinitarian belief in the triune God and the literal interpretation of the Bible. The university states that its mission is "to empower men and women to excel as influencers in our world for Christ by offering a student-focused learning community where Jesus Christ is central."

In the 1990s and early 2000s Cornerstone University expanded and transformed, changing its name, becoming a university, increasing enrollment, adding facilities and improving the campus, introducing an adult program including the MBA and a leadership development experience, adding an Honors Program and "Civitas" Core Curriculum, changing its mascot, colors, and logo, and winning a men's national basketball championship. Tenure for new faculty was suspended in 2008 but reinstated[3] in 2010.

Students are required to abide by a "Lifestyle Statement" intended to reflect trinitarianism and the literal interpretation of the Bible. The university offers 60 academic programs in the arts, sciences, humanities, Bible, teacher education, computers and business and journalism.

As of 2011[update] Cornerstone had an enrollment of 3,000 students including professional and graduate studies and both seminaries.

Cornerstone was founded in 1941 as the Baptist Bible Institute. It was accredited in 1972 as a degree-granting college. It merged with the Grand Rapids School of Bible and Music in 1993.

1994: merged with Grand Rapids School of the Bible & Music and renamed as Cornerstone College 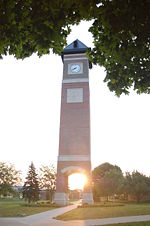 On Saturday, Oct. 7, 2006 the W. Wilbert and Meryl Welch Tower was dedicated during Cornerstone's 2006 Homecoming. The clock tower has a four faced clock near its top. The tower stands 110 feet (34 m) tall, and also has a WOOD-TV traffic camera on the southeast side of the tower. The clock tower is located between the Gainey Conference Center and Bolthouse Hall on campus. It is visible from the East Beltline, Interstate 96 and Leonard Street.

The Herald is Cornerstone's award-winning campus newspaper. It is a weekly broadsheet published during the school year. It has a weekly circulation of 2,000, which includes faculty, staff, students and numerous local businesses along Beltline and Leonard Avenues. Founded 10 October 1966, The Herald celebrated its 40 year anniversary as it began its online presence. An integral part of the school's journalism program, The Herald was named the Best College Newspaper in its division for 2008 in the Michigan Collegiate Press Association Newspaper Contest. It received a 1st place General Excellence award from the Michigan Press Collegiate Association, along with 13 additional awards in the state wide contest.

Founded in 2003, the Cornerstone Journalism Institute is an annual summer camp for high school students is held the last week of July at Cornerstone University. High school students live on campus for a week while receiving instruction from university professors as well as from guest instructors who are full-time newspaper reporters and editors from newspapers such as The Grand Rapids Press and the Indianapolis Star. The Cornerstone Journalism Institute is run by CJI Executive Director Alan D. Blanchard, associate professor of journalism. 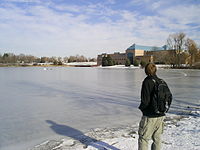 A view of the Bernice Hansen Center