Milwaukee Avenue is a major diagonal street in the city of Chicago and the northern suburbs. 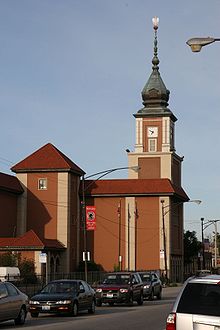 True to its name, it once led (as an Indian trail) to the city of Milwaukee, Wisconsin. Starting with a short section at N. Canal and W. Lake Streets, it begins in earnest at the corner of N Desplaines and W. Kinzie Streets and heads northwest for about 40 miles (64 km) before joining Skokie Highway (U.S. Route 41) in Gurnee, Illinois which continues on to the city of Milwaukee. From Harlem Avenue northwards it is Illinois Route 21.

Milwaukee Avenue is a popular route for bicyclists. The southeastern end of Milwaukee Avenue is the most heavily bicycled stretch of road in Chicago, with cyclists accounting for 22% of all traffic there on a randomly selected day in September.[1] 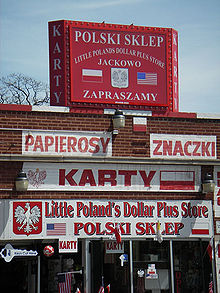 Through most of the city the street is lined with storefronts, restaurants and the occasional art gallery [1].

The CTA's Blue Line runs beneath or alongside of Milwaukee Avenue from its beginning at Canal and Lake Streets out to Logan Boulevard, with stations at Grand Avenue, Chicago Avenue, Division Street, Damen Avenue (in the Wicker Park neighborhood), Western Avenue, California Avenue and Logan Square. The Kennedy Expressway (Interstate 90) roughly parallels Milwaukee Avenue as well.

Just north of Armitage it passes the Chicago Landmark Congress Theater and at Addison Street it passes the Chicago Landmark Schurz High School. Past Irving Park Road it turns more northerly and the Blue Line crosses again at the Jefferson Park station passing the Gateway Theatre. It exits the city at about Albion Avenue and enters Niles, Illinois. (A very brief stretch later reenters the Chicago city limits, located southwest of the intersection of Harlem & Howard avenues; the street is in Niles on either side of this stretch). At Golf Road it passes the Golf Mill Shopping Center. It crosses the Des Plaines River just south of the Chicago Executive Airport, formerly known as Palwaukee Municipal Airport (whose name is formed from its location at the intersection of Palatine Road and Milwaukee Avenue). From thence it roughly follows the Des Plaines River north to the Skokie Highway in the Gurnee Woods.

While Milwaukee Avenue has been a route of chain migration for various ethnicities, it is particularly associated with Chicago's Poles who have dominated vast areas of the city which Milwaukee Avenue cuts through. Numerous Polish Patches dotted the cityscape in its vicinity, from Polish Downtown near Polonia Triangle through the Polish Village in Avondale. The street was once used as part of the route for the Polish Constitution Day Parade as well as Pope John Paul II's 1979 visit to Chicago. Numerous Polish churches, shops, and cultural organizations such as the Copernicus Foundation, the Chopin Theatre and the Polish Daily News still make their home along Milwaukee Avenue, continuing its Polish presence to the present day.