Other Worlds Science Stories (usually referred to by readers as simply Other Worlds) was an American science fiction magazine, edited by Raymond A. Palmer with Bea Mahaffey. It was published by Palmer's Clark Publishing in Evanston, Illinois beginning in the late 1940s. Sold for 35 cents, the digest size publication was bi-monthly until September 1950, six-weekly until October 1952 and then monthly.

The first issue, dated November 1949, was credited to editor Robert N. Webster, one of Palmer's pseudonyms, since Palmer was, at the time, still employed by Ziff-Davis as the editor of Amazing Stories and Fantastic Adventures. Other Worlds debuted with "The Fall of Lemuria" by Richard S. Shaver, "Where No Foot Walks" by G.H. Irwin and "Venus Trouble Shooter" by John Wiley.

Stuart J. Byrne (who sometimes wrote under the pseudonym John Bloodstone) produced a new Tarzan novel, Tarzan on Mars, but it remained unpublished because Palmer was unable to get authorization from the estate of Edgar Rice Burroughs. This led Palmer on an unsuccessful campaign for Byrne to be named as Burroughs' successor, notably with Palmer's "Tarzan Never Dies" article in the November 1955 issue. [1] When two of Byrne's Other Worlds stories (from the October 1952 and January 1957 issues) were reprinted as an ebook in 2005, he wrote the following in the introduction:

This novella, Metamorphs, once came close to being on the motion-picture screen. In my Hollywood days of following the yellow brick road of "Show Biz," I had scripted it under the spectacular title, Monster In My Blood. The former producer of This Island Earth bought it for $8,000. However, his principal finance for the film depended on Boris Karloff acting the part of the chief Metamorph. Regrettably, friend Karloff died in the middle of casting. I also speculated a script for another producer who wanted to do a horror-monster adventure pic, staged in the tropics of South America. This of course resurrected The Naked Goddess, script titled The Bridge of Time. But alas! He, too, failed to raise his capital.

But the memories engendered by these works embrace a far broader spectrum. The fact that both of these stories were cover-featured in Other Worlds magazine opens the true "other world" of the Roaring Fifties when science-fiction and fantasy reigned supreme. It also opens a special link to the editor of Other Worlds, Ray Palmer, who not only published many more of my stories but constituted a story in himself. There is also an untold link between The Naked Goddess and circumstances leading to my first meeting Ray in Chicago of 1947. The Naked Goddess has its background in South America, where I lived five years during World War II while working for Pan American-Grace Airlines (Panagra). But that background was originally used in the story, "Prometheus II," which became my first cover story, then published in Amazing Stories, whose editor then was--you guessed it--Ray Palmer. [2] 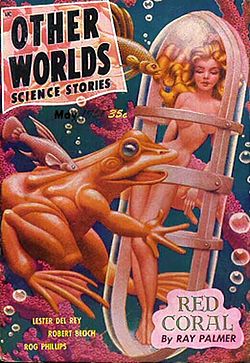 Recovering from an accident in 1953, Palmer suspended Other Worlds with the 31st issue (July 1953). He took over the magazine Universe Science Fiction (previously edited for two issues by George Bell). At the same time, Palmer began a short-lived companion titled Science Stories (1953-54). Universe ran for ten issues until March 1955 when Palmer changed the title to Other Worlds while continuing the numeration of Universe. It ran for another 12 issues as Other Worlds with Palmer introducing more material about UFOs. From May 1955 until May 1957 the publishing firm was given as Palmer Publications in Evanston, Illinois.

In June 1957, Ray Palmer changed the title to Flying Saucers from Other Worlds (later shortened to Flying Saucers). This apparent continuation of Other Worlds prompted confusion, deliberately created by Palmer so sales outlets would not have to be persuaded to take a new magazine. In truth, the magazines overlapped for two issues with ambiguous titles. However, it did continue to carry science fiction stories until September 1957, at which point it totally focused on UFO articles. Other Worlds was dropped from the title after issue 29 (May 1958). Palmer continued to publish UFO material in different formats until his death in 1977.

Between 1988 and 1996, six issues appeared of a different magazine, also titled Other Worlds, edited by Gary Lovisi for Gryphon Publications. The editorial criteria were for "short, hard SF shockers, with impact" up to 3000 words.