Characters and organizations in the Year Zero alternate reality game

Characters and organizations in the Year Zero alternate reality game

In the Year Zero alternate reality game several characters and organizations are mentioned. Most of them have websites, though some of them physically cannot be able to create a website (The Presence), and some hold websites of their subsidiary organizations (U.S. Bureau of Morality).

The Solutions Backwards Initiative is a group of students, professors, and IT specialists who devise, and succeed, in sending information back through time. The information sent back is theorized to be the websites that are connected to Year Zero. However, the data they send back through time gets somewhat corrupted, causing the garbled appearance of all of the sites in the Year Zero universe.

By means of the Art is Resistance website and Open Source Resistance, "Art is Resistance," often abbreviated to "AIR," is a loosely formed "resistance group" dedicated to creating politically-minded art as a form of non-violent resistance. Unlike the other characters and groups of the Year Zero game, Art is Resistance operates in the present and is primarily composed of participants within the game.

The intent of the group is to implement art as a form of political, grassroots resistance, and to create a politically conscious population in order to prevent a scenario like the one described in Year Zero. Although the group is technically in-game and fictitious, by allowing participants within the game to contribute via their art, "secret meetings," and similarly underground (though staged) activities, AIR could also be considered a real group, composed of participants of the game and a manifestation of the political awareness that the Year Zero game promotes.

The group's website allows users to download sticker, stencil, desktop, and avatar logos/images of the Art is Resistance flag. Use of the group's logo as graffiti seems to be implied, though the illegality of its uses as such has come into question.[1][2]

The Presence is visible on the cover of the album. 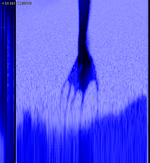 A spectrogram of the white noise at the end of the pre-release MP3 of "My Violent Heart." (

The last few seconds of the "My Violent Heart" file found on the USB drive is static; spectrogram analysis reveals an image resembling an arm extending down from the sky. This arm is known as "The Presence." This spectrogram image is later put at the end of "The Warning" and doesn't appear at the end of "My Violent Heart" on the album. Numerous, scattered, but increasingly frequent encounters with and sightings of "The Presence" are reported on much of the ARG's websites, although what the phenomenon is, exactly, remains unexplained. On Another Version of the Truth forums, "The Presence" is referred to as "these two giant arms reaching out of the sky, and they're real arms and the hands are shoved into the ground but you can see the knuckles."[1](the forum post is by Sunset Clause)

The Presence has been a recurring image in the media surrounding the album, including the trailer, album cover, and the music video for the album's first single, "Survivalism."[3][4]

A large pharmaceutical conglomerate with extensive government ties, Cedocore is the creator of a number of drugs, including Parepin which is administered on a national scale in the tap water. They are also, covertly, the sole manufacturer of Opal, distributing it illicitly. [2]

A government agency whose task is to control numerous aspects of American life and to prevent and stop all instances of subversion by citizens.

A former member of the 105th Airborne Crusaders, the "Angry Sniper" conducts a terrorist act at Wrigley Field, presumably as an act of revenge against the government. He is also speculated to run the Be the Hammer resistance website.

The First Evangelical Church of Plano is a sola scriptura organization that threatens "Whoever Resists the Authority Resists God" to legitimize and support the Year Zero government. Not much is known about the Church, but it has taken a special interest in The Presence and is sponsoring a "Neighborhood Cleansing Program" so members can "put their faith into action."

Judson Ogram is a correctional institution, referring to its inmate populace as "offenders." However, indications suggest that Judson Ogram does not differentiate between criminals and people with psychological dysfunction.

Examination of profiles at Judson Ogram indicates that anti-psychotic substances are needlessly used on inmates, displaying no signs of elevated excitement, self harm or psychotic tendencies. Speculation would suggest that this is to make inmates so docile that they are willing to accept the mistreatment that goes on inside the facility - indeed, the staff page suggests that inmates are used as guinea pigs for the pharmaceutical company Cedocore, leading to the discovery that Cedocore's "Xerimax" product causes renal damage and pulmonary edema.

[CLASSIFIED] inmate
First mentioned in Exhibit Twenty Four, an incriminating evidence dossier of a criminal investigation on the unnamed inmate. The inmate is mentioned twice within the dossier, in describing the "Survivalism" music video as "Surveillance footage detailing the capture of inmate [CLASSIFIED]," and in describing video of the "first Open Source Resistance meeting" in Los Angeles on April 13, 2007 as "Archival footage [which] includes performance by dissident musician [CLASSIFIED]." This suggests that the "CLASSIFIED" inmate is none other than Nine Inch Nails frontman Trent Reznor, incarcerated as a "dissident musician" 15 years in the future. The status of the inmate, according to the site, suggests the outcome of his trial: "Pretrial Verdict on Inmate [CLASSIFIED]: Guilty."

Jed Mather
American ambassador kidnapped and killed by Algerian terrorists by means of the Red Horse virus. Subject of this video, chronicling his capture and death.