Drugs and devices in the Year Zero alternate reality game

Drugs and devices in the Year Zero alternate reality game

This is a comprehensive list of drugs, viruses, and body augmentations from the Year Zero alternate reality game by Nine Inch Nails and 42 Entertainment. The Year Zero alternate reality game, and its accompanying concept album of the same name, criticizes the United States government's policies as of 2007,[1] projecting a dystopian vision of its impact on the state of events in 2022. The game has been underway since roughly February 12, 2007 and is expected to continue for approximately eighteen months.[2]

Parepin
A psychotropic drug released into American water supplies, purported to reduce the risk of bioterrorism by bolstering the immune system. However, the creator of I am Trying to Believe claims to have debunked these myths as a conspiracy; parepin is actually a sedative, known to affect serotonin and dopamine levels. The drug is also known to reduce the sex drive of anyone who has ingested the drug, cause facial ticks and constipation, as well as subduing resistance to authority. Some people under the influence of the drug are known to have had hypnagogic hallucinations, particularly that of The Presence.

Opal (Hycephamitamyn-η)
A new drug, supposedly "the new crack", as it is cheaper to distribute and more widely available. Dispensed in a small, pressurized glass tube with a syringe on one end, the drug, which appears as a black liquid, is dropped or injected directly into the eyes, or absorbed through the skin in powdered form with the aid of a solvent. While initially developed as a hallucinogenic sedative, it has become popular as a recreational drug, with users often experiencing an intense, often religious, state of mind. At least one website notes a correlation between Opal use and sightings of The Presence.

In a top-secret internal memo from Cedocore found here, Opal is revealed to be a product of Cedocore, via a subsidiary company by the name of "Wantzen-Tabard-Boutier", being distributed through organized crime.

Blue pills
Referenced in Be the Hammer [1]. Nicknamed "die-agra", these pills are given to soldiers to reintroduce the aggression lost by taking Parepin. They are said to help "keep you frosty and get your soldier on."

Red pills
Also referenced in Be the Hammer [2]. Nicknamed "blisters", "bloody mary", and "jerk", these pills seem to be a more extreme version of the Blue pills, given to only the best soldiers. They are said to "erase the line between killing and fucking. Some of the damage is permanent." Due to the cryptic nature of its mention, it is unclear whether soldiers are either not allowed to see their families after taking the Red pills, or are not warned of the propensity of the prescribed user to become lethally violent during sex, but either way are told the drug's side effects only after they are given the pill.

Nerochip
The nerochip is a tiny red device, implanted in the right wrist of all convicts of violent crimes, which traces the whereabouts of the person who carries it. They are also required for certain privileges among the general public, such as being able to drive. They are also known to come in different forms aside from implants. For example, earrings containing the device have become popular among celebrities and the public. 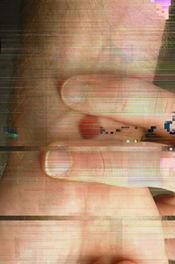 An implanted Nerochip, as shown on Operation Swamp 0000.

The device's name and functions may be derived from the Mark of the Beast. The Roman Emperor Nero is also thought to have been the original candidate for the Antichrist of Christian teaching.

Red Horse virus
Primarily described in Red Horse Vector, the Red Horse virus is a "hardy" biological agent "presenting many of the same symptoms of the Ebola virus without the attending fragility one would expect of Ebola." A video on Red Horse Vector shows the effects of the Red Horse virus on Jed Mather, a U.S. diplomat kidnapped and killed by Algerian terrorists. Additionally, a wiretapped conversation on 1-216-333-1810 describes an attack of an underground nightclub dubbed the "Star Chamber", where the characteristic symptom of "sweating blood" is described.

The Copper
A secret, government produced vaccine that prevents a person from contracting the Red Horse virus. The vaccine does have some side-effects such as having orange colored body secretions, having a copper scent (both of which are described in the U.S. Wiretap transcript [3]), paranoia, aversion to bright lights, and skin sensitivity. Withdrawals from the Copper are reportedly fatal.