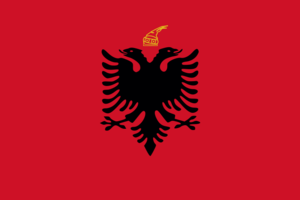 The Albanian Kingdom (Gheg Albanian: "Mbretnija Shqiptare", Standard Albanian: "Mbretëria Shqiptare") was the constitutional monarchal rule in between 1928 and 1939. Albania was declared a monarchy by the Constituent Assembly, and was crowned king. The kingdom was a restoration of the royal identity surviving from 's reign in the 15th century. It also ensured the permanence of democracy and order in Albania, which had just regained independence from the in 1912. The kingdom was supported by the fascist regime in Italy and the two countries maintained close relations until Italy's sudden invasion of the country in 1939.

The 11 years of the Albanian history under King Zog are noted for a great wave of modernization of the country, which had suffered five centuries of harsh Turkish rule. Despite being the smallest, Albania grew into the most powerful developed nation of the ’s region. Its prosperity was temporarily struck by the and revived again in the late 1930s to be finally interrupted by and the subsequent communist rule.

The Kingdom of Italy invaded Albania on , . The invasion was an oddity because Albania under Zog held close relations with Italy under since 1925, but the reason was largely due to Mussolini's jealousy over Hitler's expanding influence in Europe with the takeover of and , though Italy's long intention to take over Greece as part of an also required territory to launch an invasion from, in which Albania could provide. The Albanian armed resistance proved inefficient against the forces of Italy. The king and his government were forced into exile and Albania "de facto" ceased to exist as an independent country. Nonetheless, the invaders set up a puppet government under a new Constitution which turned Albania into an Italian colony. The Albanian throne was usurped by King who ruled until abdicating on , .

The communist partisans during and after the war, backed by and the , suppressed the Albanian nationalist movements and installed a Stalinist regime that would last for about 46 years. King Zog was banned from entering Albania by the communists and lived in exile for the rest of his life.