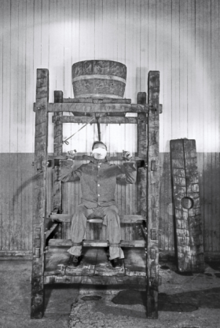 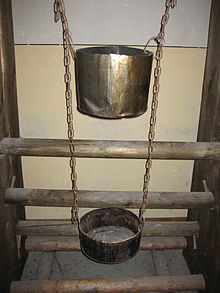 Chinese water torture is the popular name for a method of water torture in which water is slowly dripped onto a person's forehead, allegedly driving the restrained victim insane. This form of torture was first described under a different name by Hippolytus de Marsiliis in Italy in the 15th century.

The term "Chinese water torture" may have arisen from Harry Houdini's Chinese Water Torture Cell (a feat of escapology introduced in Berlin at Circus Busch September 21, 1912; the escape entailed Houdini being bound and suspended upside-down in a locked glass and steel cabinet full to overflowing with water, from which he escaped), together with the Fu Manchu stories of Sax Rohmer that were popular in the 1930s (in which the evil Fu Manchu subjected his victims to various ingenious tortures, such as the wire jacket). Hippolytus de Marsiliis is credited with the invention of a form of water torture. Having observed how drops of water falling one by one on a stone gradually created a hollow, he applied the method to the human body. Other suggestions say that the term "Chinese Water Torture" was invented merely to grant the method a sense of ominous mystery.

The term Spanish water torture is also used in Europe and UK, although this term often refers to a variation of waterboarding used during the Spanish Inquisition:

"Victims were strapped down so that they could not move, and cold water was then dripped slowly on to a small area of the body. The forehead was found to be the most suitable point for this form of torture: prisoners could see each drop coming, and after long durations were gradually driven frantic as a perceived hollow would form in the centre of the forehead. Many of the people that were being tortured suffered a great deal of mental retardation."[citation needed]

The Norse legend of Loki may have also been an inspiration for the Chinese water torture. Loki, who was punished by the gods for murdering Baldr, was strapped to three slabs of stone, and had a snake placed above him, so that its venom would pour into his eyes.