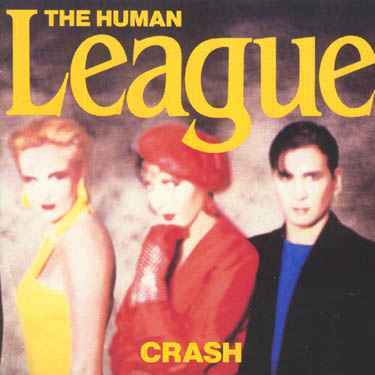 "Crash" is the fifth full-length studio album released by the British band in 1986. Unlike the band’s previous and subsequent albums it is R&B influenced. Crash would provide the band with their second US No 1 single "Human" the same year.

After spending two years recording their fourth album , which only met with moderate commercial success the band struggled to record further material and by 1985 they had lost both "Dare" producer and musician/songwriter . worried by the lack of progress in their previously most profitable signing called the band principles to a meeting where a solution to the impasse in the band was sought. As the problem was perceived to be the lack of production, it was suggested that the band take up an offer to work with based production duo . Jam and Lewis had recently become in-demand producers following their huge global success with 's "Control" album. Jam and Lewis had developed an interest in the Human League after the success of their U.S releases; they were also seeking an opportunity to cross over into the mainstream pop and saw The Human League as the perfect opportunity.

In February 1986 The Human League were flown out to Minneapolis to work at Flyte Time studios with Jam and Lewis. After initial enthusiasm on both sides the working relationship began to break down. Jam and Lewis had total control over the final album and insisted that their own tracks take precedence over the Human League's. Jam and Lewis were also intolerant of the bands' laid back working methods and their musician's lack of technical ability.

Keyboard players and had been sidelined by Jam and Lewis. Wright (an original member) would not recover from the humiliation, and feeling redundant he immediately left the band on return to the UK, a year later Burden would follow him.

After 4 months in Minneapolis, Oakey pulled the band out of further recording and they returned to Sheffield leaving Jam and Lewis to complete the album using session musicians. Oakey said later:

The album name was taken from a moment in the studio during the recording. Oakey described it thus:

Although at the time the band had all but washed their hands of the album post production, when released it quickly became an unexpected success. One of the Jam and Lewis compositions, "Human", was released as the album's first single and became the Human League's second number-one on the U.S. (no.8 in the UK). The Album itself was more popular in the U.S than the UK. Follow-up singles "" and the 1988 UK-only release "" were not as successful. But the album had succeeded in returning the Human League back to mainstream prominence both sides of the Atlantic five years after their "Dare" album. Oakey with hindsight states that it was this album that saved the band’s career and one of the main reasons they are still recording today.

In 2005, "Crash" was re-issued with extended versions of the three singles.

The out of focus cover photo was used to disguise the fact that it was taken at very short notice to meet a print deadline, after the disaster of the planned original photo shoot. Oakey originally wanted to return to the Cover style of Dare’s artwork for Crash. He had persuaded Virgin Records to finance a studio photo shoot of the band with Vogue’s based Photographer . The band were flown out to Paris for the two day photo sessions. However on arriving at Bourdin’s studio it became apparent that he was only interested in photographing the two female vocalists and . Matters came to a head when Bourdin instructed the often volatile Sulley to adopt a pose she considered inappropriate. She turned on Bourdin and the two clashed angrily, Bourdin then refused to work with the band and they walked out of the session with the loss of all fees. Oakey describes it: