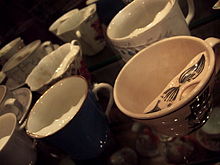 The moustache cup is a drinking cup with a semi-circular ledge inside. The ledge has a semi-circular opening to allow the passage of liquids and serves as a guard to keep moustaches dry. It is generally acknowledged to have been invented in the 1860s by British potter Harvey Adams (born 1835).

During the recording of The Beatles' album, Sgt. Pepper's Lonely Hearts Club Band, John Lennon drank his tea from a moustache cup.

In James Joyce's Ulysses, Leopold Bloom drinks his tea from a moustache cup he received from his daughter Milly for his 27th birthday.[1]