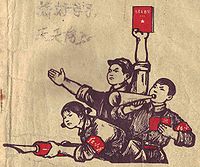 Red Guards (simplified Chinese: 红卫兵; traditional Chinese: 紅衛兵; pinyin: Hóng Wèibīng) were a mass movement of civilians, mostly students and other young people in the People's Republic of China (PRC), who were mobilized by Mao Zedong in 1966 and 1967, during the Cultural Revolution.

The first students to call themselves "Red Guards" in China were a group of students at the Tsinghua University Middle School who used the name Red Guards to sign two big-character posters issued on May 25 and June 2 of 1966.[1] The students believed that the criticism of the play Hai Rui Dismissed from Office was a political issue and needed greater attention. The group of students, led by Zhang Chengzhi at Tsinghua University Middle School and Nie Yuanzi at Peking University, originally wrote the posters as a constructive criticism of Tsinghua University and Peking University's administration, which were accused of harboring "intellectual elitism" and "bourgeois" tendencies.[2] However, they were denounced as "counter-revolutionaries" and "radicals" by the school administration and fellow students, and were forced to secretly meet amongst the ruins of the Old Summer Palace. Nevertheless, Chairman Mao Zedong ordered that the manifesto of the Red Guards be broadcast on national radio and published in the People's Daily newspaper. This action gave the Red Guards political legitimacy, and student groups quickly began to appear across China.[3]

Due to the factionalism already beginning to emerge in the Red Guard movement, Liu Shaoqi made the decision in early June 1966 to send in Communist Party of China (CPC) work teams.[1] These work groups were led by Zhang Chunqiao, head of China's Propaganda Department, and were the attempt by the Party to keep the movement under its control. Rival Red Guard groups led by the sons and daughters of cadres were formed by these work teams to deflect attacks away from those in positions of power towards bourgeois elements in society, mainly intellectuals.[3] In addition, these Party-backed rebel groups also attacked students with 'bad' class backgrounds (these included the children of former landlords and capitalists).[3] These actions were all attempts by the CPC to preserve the existing state government and apparatus.[1]

Mao, concerned that these work teams were hindering the course of the Cultural Revolution, dispatched Chen Boda, Jiang Qing, Kang Sheng, and others to join the Red Guards and combat the work teams.[2] In July 1966, Mao ordered the removal of the remaining work teams (against the wishes of Liu Shaoqi) and condemned their 'fifty days of White Terror'.[4] The Red Guards were now free to organise without the restrictions of the Party and, within a few weeks, on the encouragement of Mao's supporters, Red Guard groups had appeared in almost every school in China.[5]

Role in the Cultural Revolution

On 18 August 1966, Mao met a million Red Guards formally in an audience given in Tiananmen Square, when he donned a Red Guard armband to demonstrate his support for the movement and its objectives. It was this rally that signified the beginning of the Red Guards' involvement in implementing the aims of the Cultural Revolution.[6]

The 11th Plenum, which was meeting in August, had ratified the 'Sixteen Articles', a document that stated the aims of the Cultural Revolution and highlighted the role students would be asked to play in the movement. After the August rally, the Cultural Revolution Group directed the Red Guards to attack the 'Four Olds' of Chinese society (old customs, old culture, old habits and old ideas). For the rest of the year, Red Guards marched across China in a campaign to eradicate the 'Four Olds'. Old books and art were destroyed, museums were ransacked, and streets were renamed with new revolutionary names and adorned with pictures and the sayings of Mao.[7] Many famous temples, shrines, and other heritage sites in Beijing were attacked.[8]

However, attacks on culture quickly descended into attacks on people. Ignoring guidelines in the 'Sixteen Articles' that stipulated that persuasion rather than force were to be used to bring about the Cultural Revolution, officials in positions of authority and perceived 'bourgeois elements' were denounced and suffered physical and psychological attacks.[7] Intellectuals were to suffer the brunt of these attacks. Many were ousted from official posts such as university teaching and allocated manual tasks such as "sweeping courtyards, building walls and cleaning toilets from 7am to 5pm daily" which would encourage them to dwell on past "mistakes".[9] An official report in October 1966 reported that the Red Guards had already arrested 22,000 'counterrevolutionaries'.[10] Occasionally, the Red Guards brought a large group of targeted people for firing squads, who left some randomly chosen people alive while others around them were shot.[11] This "Chinese roulette" was said to leave a bullet of fear and repression inside the brain.[11]

The Red Guards were also tasked with rooting out 'capitalist roaders' (those with supposed 'right wing' views) in positions of authority, This search was to extend to the very highest echelons of the CPC, with many top party officials, such as Liu Shaoqi, Deng Xiaoping and Peng Dehuai being attacked both verbally and physically by the Red Guards.[12] Liu Shaoqi was especially targeted, as he had taken Mao's seat as Chairman of the People's Republic following the debacle that was the Great Leap Forward. Although Mao stepped down from his post as a sign of accepting responsibility, he was angered that a Capitalist Roader like Liu could take the reins of communist China.

However, the Red Guards were not to go about their activities completely unchallenged. The Red Guards were not permitted to enter Zhongnanhai, the Forbidden City, foreign Embassies, Friendship stores, or any military sensitive facilities. When Red Guards entered factories and other areas of production, they encountered resistance in the form of worker and peasant groups who were keen to maintain the status quo.[13] In addition, there were bitter divisions within the Red Guard movement itself, especially along social and political lines. The most radical students often found themselves in conflict with more conservative Red Guards.[14]

The leadership in Beijing also simultaneously tried to restrain and encourage the Red Guards, adding confusion to an already chaotic situation. On the one hand, the Cultural Revolution Group reiterated calls for non-violence, but on the other hand the People's Liberation Army was told to assist the Red Guards with transport and lodging, and there were eight rallies in Tiananmen Square between the 18th August and the 26th November 1966 (in total, twelve million Red Guards traveled to see Mao in these rallies).[14] However, by the end of 1966, most of the Cultural Revolution Group were of the opinion that the Red Guards had become too much of a political liability.[14] The campaign against 'capitalist-roaders' had led to anarchy, the Red Guards' actions had led to conservatism amongst China's workers, and the lack of discipline and the factionalism in the movement had made the Red Guards politically dangerous.[15] 1967 would see the decision to dispel the student movement.

Factionalism within the Red Guards

"Enveloped in a trance of excitement and change", all student Red Guards pledged their loyalty to their beloved Chairman Mao Zedong.[16] Many worshipped Mao above everything and this was typical of a "pure and innocent generation".[17] Excited youths took inspiration from Mao's often vague pronouncements, generally believing the sanctity of his words and making serious efforts to figure out what they meant. Factions quickly formed based on individual interpretations of Mao's statements. All groups pledged loyalty to Mao and claimed to have his best interests in mind, yet they continually engaged in verbal and physical skirmishes all throughout the Cultural Revolution.[citation needed]

Youth from families with party-members and of revolutionary origin joined conservative factions. These factions focused on the socio-political status quo, keeping within their localities and working to challenge existing distributions of power and privilege.[18] Those from the countryside and without ties to the Chinese Communist Party often joined radical groups who sought to change and uproot local government leadership. The primary goal of the radicals was to restructure existing systems to benefit those of poorer backgrounds, as supposed Capitalist Roaders were corrupting the Socialist agenda. Primarily influenced by travel and a freer exchange of ideas from different regions of China, more joined the radical, rebel factions of the Red Guards by the second half of the Cultural Revolution.[19]

Some historians, one being Andrew Walder, argue that individuals and their political choices also influenced the development of Red Guard factions all across China. Interests of individuals, interactions with authority figures, and social interactions all altered identities to forge factions that would fight for new grievances against "the system".[18] Following Mao Zedong's idea of permanent revolution, the factions and their identities continually evolved as new ideas and people were brought in. Ultimately, the struggle between factions led to the chaotic civil-war-like atmosphere which foiled Mao's original intent to have the people carry out an orderly permanent revolution against the existing regime.

End of the movement

By February 1967 political opinion at the center had decided on the removal of the Red Guards from the Cultural Revolution scene in the interest of stability.[20] The People's Liberation Army (PLA) forcibly suppressed the more radical Red Guard groups in Sichuan, Anhui, Hunan, Fujian, and Hubei provinces in February and March. Students were ordered to return to schools; student radicalism was branded 'counterrevolutionary' and banned.[21] There was a wide backlash in the spring against the suppression, with student attacks on any symbol of authority and PLA units. An order from Mao, the Cultural Revolution Group, the State Council, and the Central Military Affairs Committee of the PLA on September 5, 1967 instructed the PLA to restore order to China.[22]

The PLA violently put down the national Red Guard movement in the year that followed, with the suppression often brutal. A radical alliance of Red Guard groups in Hunan province called the Sheng Wu Lien was involved in clashes with local PLA units, for example, and in the first half of 1968 was forcibly suppressed.[23] At the same time the PLA carried out mass executions of Red Guards in Guangxi province that were unprecedented in the Cultural Revolution.[23]

The final remnants of the movement were defeated in Peking in the summer of 1968. Reportedly, in an audience of the Red Guard leaders with Mao, the Chairman informed them gently of the end of the movement with a tear in his eye. The repression of the students by the PLA was not as gentle.[24] After the summer of 1968 some more-radical students continued to travel across China and play an unofficial part in the Cultural Revolution, but by then the movement's official and substantial role was over.