Dunvegan (Gaelic: Dùn Bheagain) is a town on the Isle of Skye in Scotland. It is famous for Dunvegan Castle, seat of the chief of Clan MacLeod. It is also the hometown of celtic fusion band Peatbog Faeries.

In The Norse Influence on Gaelic Scotland (1910), George Henderson suggests that the name Dùn Bheagain derives from Old Gaelic Dùn Bheccáin ([the] fort of Beccán), Beccán being a Gaelic personal name. Dùn Bheagain would not mean 'little fort' as this would be Dùn Beag in Gaelic.

The village is now home to 4 decent sized hotels/B&B's, a bakery, a restaurant, a cobblers, two general stores, 1 filling station, a garage, tourist information, a gun shop, a fishing store and a fruit and vegetable shop. It also has a recycling point and other small facilities. The Giant MacAskill Museum, which celebrates the life of Angus Mòr MacAskill was established in 1989 and is managed by Peter MacAskill, father of the street trials cycle rider Danny MacAskill.[1]

Dunvegan sits on the shores of the large 'Loch Dunvegan' and the Old School Restaurant in the village is widely known for its freshly caught fish from the loch itself.

Dunvegan's permanent population is declining, however numbers staying in the area during holidays has increased dramatically over the years since 2001. 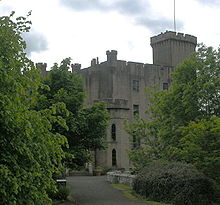 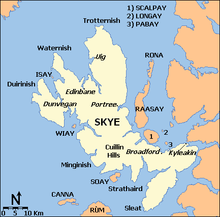