Home from the Hill (film)

Home from the Hill (film) 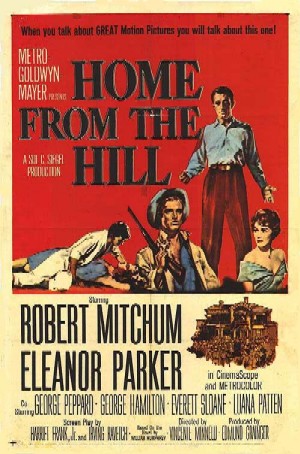 The script was adapted from the novel, "Home from the Hill", by author, William Humphrey

Captain Wade Hunnicutt, the wealthiest and most powerful citizen in his East Texan town, is married to Hannah. Wade had two children approximately the same age: Theron, Wade's son with Hannah, and Rafe Copeley, his illegitimate son. Wade is a notorious womanizer, and as the story opens he is conducting an extramarital affair. which has turned his wife Hannah against him. She has brought up their son Theron to be dependent upon her; but as he reaches adulthood, Hunnicutt insists on taking over his upbringing, initiating him in hunting and other masculine pursuits, under the watchful eye of Rafe, Hunnicutt's loyal employee. But Theron's new lifestyle leads him into a love affair with a local girl named Libby Halstead, and thence to learning things about his parents that were previously hidden from him. Theron is disturbed by his parents' dysfunctional relationship, and is thus not anxious to marry Libby, his true love. The vicious cycle threatens to continue when Libby gives birth to Theron's out-of-wedlock son, but Rafe turns Libby into an "honest woman" by acting as father to the child. Libby's father, Albert Halstead, fearing that his daughter has been impregnated by Captain Hunnicutt, sets out to right the wrong and assassinates the Captain. Theron seeks justice and tracks down his father's killer in the Sulfur River bottom in Northeast Texas. Hannah surprises Rafe by acknowledging him as Wade's son and having Wade's tombstone reflect the fact.