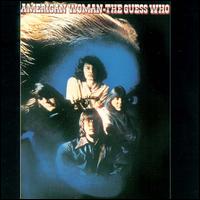 
"American Woman" is an released in 1970 by the Canadian rock band . It peaked at No. 9 on the Billboard Pop Albums charts. It stayed on the charts for more than a year and was their most successful release.Fact|date=October 2008

This was guitarist 's last finished album with the group until a reformation effort in 1983.

"American Woman" was re-mastered and released on CD by in 2000 and included a bonus track – "Got to Find Another Way".