The Nebelwerfer ("Smoke Mortar"[1] literally "Fog thrower") was a World War II German series of weapons originally designed to deliver chemical weapons.[citation needed] They were initially developed by and assigned to the Wehrmacht's so-called Chemical Troops (Nebeltruppen). This weapon was given its name as a disinformation strategy designed to lead spies into thinking that it was merely a device for creating a smoke screen.[citation needed] They were primarily intended to deliver poison gas and smoke shells,[citation needed] although a high-explosive shell was developed for their Nebelwerfers from the beginning. Initially two different mortars were fielded before they were replaced by a variety of rocket launchers ranging in size from 15 to 32 centimetres (5.9 to 13 in). The thin walls of the rockets had the great advantage of allowing much larger quantities of gases, fluids or high-explosive to be delivered than artillery or even mortar shells of the same weight. Nebelwerfers were used in every campaign of the German Army during World War II with the exception of the Balkans Campaign. One rocket was even adapted for air-to-air use against Allied bombers. The name was also used to fool observers from the League of Nations, who were observing any possible infraction of the Treaty of Versailles, from discovering that the weapon could be used for explosive and toxic chemical payloads as well as the smoke rounds the name Nebelwerfer suggests.

The lower muzzle velocity of a mortar meant that its shell walls were thinner than those of artillery shells and it could carry a larger payload than artillery shells of the same weight. This made it an attractive delivery system for poison gases. The U.S. Army's Chemical Warfare Service developed their 4.2 inch chemical mortar for precisely that reason and the Nebeltruppen shared that reasoning. Its first weapon was also a mortar, the 10 cm Nebelwerfer 35, which was designed in 1934.[2]

Almost from the beginning the Army wanted more range than the 10 cm NbW 35's 3,000 metres (3,300 yd), but troop trials of two prototypes didn't take place until May 1940. Neither was entirely satisfactory, but the best features of both were incorporated into the 10 cm Nebelwerfer 40. This was a very advanced breech-loading weapon with a recoil mechanism and an integral wheeled carriage. It had twice the range of its predecessor, but weighed eight times as much and cost nearly ten times as much, 1,500 RM vs 14,000 RM.[2]

Rocket development had begun during the 1920s and reached fruition in the late Thirties. These offered the opportunity for the Nebeltruppen to deliver large quantities of poison gas or smoke simultaneously. The first weapon to be delivered to the troops was the 15 cm Nebelwerfer 41 in 1940, after the Battle of France, a purpose-designed rocket with gas, smoke and high-explosive warheads. It, like virtually all German rocket designs, was spin-stabilized to increase accuracy. One very unusual feature was that the rocket motor was in the front, the exhaust venturi being about two-thirds down the body from the nose, with the intent to optimize the blast effect of the rocket as the warhead would still be above the ground when it detonated. This proved to greatly complicate manufacture for not much extra effect and it was not copied on later rocket designs. It was fired from a six-tube launcher mounted on a towed carriage adapted from that used by the 3.7 cm PaK 36 to a range of 6,900 metres (7,500 yd).[3] Almost five and a half million 15 cm rockets and six thousand launchers were manufactured over the course of the war.[4]

The 28/32 cm Nebelwerfer 41 rockets were introduced in 1941, before Operation Barbarossa. They used the same motor, but carried different warheads. The 28 centimetres (11 in) rocket had a HE warhead, while the 32 centimetres (13 in) rocket's was incendiary. The maximum range for either rocket was only 2,200 metres (2,400 yd), a severe tactical drawback. Both could be fired from their wooden packing cases or special wooden (schwere Wurfgerät 40 - heavy missile device) or tubular metal (schwere Wurfgerät 41 (sW.G. 41)) frames. Later, a towed launcher was developed that could take six rockets. Both rockets used the same launchers, but special liner rails had to be used for the 28 cm ( in) rockets. A vehicular launch frame, the schwere Wurfrahmen 40 (sWu.R. 40), was also designed to improve the mobility of the heavy rockets. These were normally mounted on the sides of Sd.Kfz. 251 half-tracks, but they were also adapted for several different captured French tracked vehicles. The sWuR 40 was nicknamed the Stuka-zu-Fuß ("Foot Stuka").[5] Over six hundred thousand rockets and seven hundred launchers, excluding the sW.G. and sWu.R. firing frames, were made during the war. More than fifteen thousand frame launchers were built beginning in 1940.[4]

The 21 cm Nebelwerfer 42 rocket was introduced in 1942 with a longer range (7,850 metres (8,580 yd)) and a simpler design than the smaller 15 cm rocket. It only had a high-explosive warhead. It was fired from a five-tube launcher that used the same carriage as the smaller weapon. Liner rails were made to allow it to fire the smaller 15 cm rocket. It was also adapted for use by the Luftwaffe to break up Allied bomber formations in 1943 as the Werfer-Granate 21.[5] Over four hundred thousand rockets and fourteen hundred launchers were completed.[4]

The last German-designed rocket to be introduced was the 30 cm Nebelwerfer 42 in 1943. This was intended to replace the 28 and 32 cm rockets which proved to have too short a range. Advances in propellant chemistry also reduced its smoke signature. It could be fired from all of the same platforms as the older rockets and many of the older launchers were converted to be used by the newer rocket by installing adapter rails although it had its own purpose-designed launcher, the 30 cm Raketenwerfer 56, as well.[5] Less than two hundred thousand rockets and seven hundred launchers were built during the war.[4]

The Waffen-SS decided to copy the Soviet 82 millimetres (3.2 in) M-8 Katyusha rocket launcher as the twenty-four-rail 8 cm Raketen-Vielfachwerfer. Its fin-stabilized rockets were cheaper and easier to manufacture than the German spin-stabilized designs and used cheap launch rails. It was also capable of using the considerable stocks of captured Soviet rockets. Separate production lines were set up under party control as the Army refused to convert any of its existing factories, but not many actually appear to have been made.[5] Production quantities are unknown, but photographic evidence shows the launcher mounted on lightly armored versions of the Sd.Kfz. 4 "Maultier"[6] and the captured French SOMUA MCG half-track.[7]

In order to improve the mobility of the Nebelwefer units a ten-tube 15 centimetres (5.9 in) launcher was mounted on a lightly armored Sd.Kfz. 4 "Maultier" half-track chassis as the 15 cm Panzerwerfer 42 auf Selbstfahrlafette Sd.Kfz. 4/1 (based on the Opel Maultier, or "mule", half-track). Three hundred of these were produced, split evenly between launchers and ammunition carriers (which were identical except for the launcher).[8] These were superseded in production by the 15 cm Panzerwerfer 42 auf Schwerer Wehrmachtsschlepper (Panzerwerfer auf SWS) which had improved cross-country mobility and greater ammunition storage than the "Maultier".[6] The exact number built of the latter weapon are unknown, but evidence suggests that fewer than one hundred were completed before the end of the war.[4] 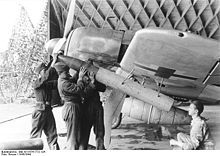 The Werfergranate 21 (Wfr. Gr. 21), also called the 21 cm BR (BR believed to be the abbreviation for "Bordrakete" in official Luftwaffe manuals)[1] was an unguided air-to-air rocket version of the projectile used in the Nebelwerfer 42 and was first used in the defense of Schweinfurt on 17 August 1943.[9] The Wfr. Gr. 21 was mounted on Messerschmitt Bf 109 and Focke-Wulf Fw 190 fighters (one launch tube under each wing) and on the Messerschmitt Bf 110 and Messerschmitt Me 410 heavy fighters (two launch tubes under each wing) and was the first air-to-air rocket used by the Luftwaffe.[9] Photographic evidence indicates that the Hungarians fitted three tubes under each wing of some of their twin-engined Me 210 Ca-1 heavy fighters.[10] The rockets were used to break up Allied bomber formations in order to enable more effective German fighter attacks against the scattered Allied aircraft.[11] However, the high drag caused by the launchers reduced the speed and maneuverability of the launching aircraft, a handicap which could prove fatal if Allied fighters were encountered. Also, the launch tube's underwing mounting setup, which usually aimed the projectile at about 15º upwards from level flight to counter the considerable ballistic drop of the projectile in flight after launch, added to the drag problem.

After the crew had loaded and aimed the launcher, they had to take cover 10 to 15 metres (11 to 16 yd) away to avoid the exhaust flames, and would fire the rockets with an electric switch. After firing, however, a long streak of smoke was visible from a considerable distance, leaving the Nebelwerfer vulnerable to counter-battery fire. It was therefore necessary to relocate the launcher and crew as soon as possible after firing.[12] The loud, shrill howling noise of the incoming rockets led American soldiers in the Sicily campaign to give it the nicknames "Screaming Meemie" and "Moaning Minnie".[13]

As part of the general expansion of the Waffen-SS it began to form its own Werfer units in 1943, although they never formed any unit bigger than a battalion. These were organized much the same as their Army counterparts.[16]

The 1st, 2nd and 5th Nebelwerfer Battalions, each equipped with twenty-four 10 cm Nbw 35 mortars in three batteries, were ready when the Germans invaded Poland in September 1939. The 1st and 2nd Battalions participated in that campaign while the 5th remained in Western Germany.[17] One battery of Artillery Regiment 222 was converted to 10 cm NbW 35s and participated in the Norwegian Campaign.[18] By May 1940 five more battalions had been formed, all equipped with 10 cm NbW 35 mortars, filling out the sequence from 1 to 8, but only the first five were combat ready when the Battle of France began on 10 May 1940.[19]

The first 15 cm NbW 41 rocket launchers were delivered in July 1940, forming three new regiments, the 51st though 53rd Nebelwerfer Regiments, each with three battalions. The 54th Regiment was formed from the 1st and 7th Nebelwerfer Battalions.[20] The Nebel-Lehr Regiment was formed from the Nebeltruppen school in Celle on 29 April 1941 with two battalions, one each with 10 cm NbW 35 mortars and 15 cm NbW 41 rockets. The independent Nebelwerfer Battalions retained their mortars with the exception of the 8th, which received rockets before Operation Barbarossa. The only way of differentiating the units equipped with mortars during this period from those with rockets being the "d." or "do." suffix added to the designations of the rocket-equipped units. Beginning in November 1941 the eight Decontamination Battalions were fully equipped with 28/32 cm NbW 41 rockets (some had sW.G. 40 and 41 launching frames earlier) and reorganized into three Heavy Werfer Regiments.[14]

During early 1942 the 10th Mountain Werfer Battalion was formed from the 104th Decontamination Battalion and sent to 20th Mountain Army in Finland. In late 1943 Werfer-Battalion 11 was organized from two batteries already in Finland, including the battery from Artillery Regiment 222 that participated in the invasion of Norway. A new Panzerwerfer battery was sent from Germany to be its third battery at the same time. Both battalions retreated into Northern Norway after the Finnsh armistice in September 1944 after the Vyborg–Petrozavodsk Offensive[21]

The 9th Nebelwerfer Battalion was given rockets, redesignated as the first battalion of Werfer-Regiment 71 and sent to North Africa late that year. Most of the second battalion were sent to Tunisia in early 1943 where they surrendered in May. The remainder of the regiment fought in Sicily and mainland Italy for the rest of the war.[22]