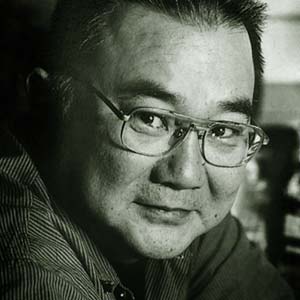 nihongo|Takeshi Kaikō|開高 健| "Kaikō Takeshi" |extra= – was a prominent post- ese novelist, short-story writer, essayist, , and writer. He was distinguished by his knowledge, intellect, sense of humor and conversational skills, and although his style has been criticized as wordy and obtuse, he was one of the more popular Japanese writers in the late . His pen name was Kaikō Ken, which is written with the same "".

Kaikō was born in the Tennoji Ward of as the son of an elementary school teacher. In 1948, he enrolled in the Law Department of , but was often absent from class, as he had to take a variety of part-time jobs in order to pay for his tuition. While in school, rather than study law he was sidetracked by the works of , and . He also translated the works of and into Japanese. He graduated in 1953 and moved to , where he took a job with Kotobukiya (the present ), where he worked in the public-relations department.

He married , a poet.

Kaikō published his first work, "Na no nai machi" (Nameless City, 1953) in the "Kindai Bungaku" soon after his move to Tokyo. It was largely ignored by critics. However, his second work, a short story titled "Panniku" (Panic, 1957) published in the "Shin Nippon Bunkaku", caused a sensation for its unusual concept and style. It was a story about a dedicated forester in a rural prefecture of Japan, who struggles against government incompetence and corruption. Kaikō wrote the story as a satirical comparing human beings to mice.

Kaikō won the prestigious in 1957 with his "Hada no ōsama" (The Naked King), a story critical of the pressures placed on school children by Japan's educational system.

Kaikō is considered a activist, respected in many Indochinese countries, in particular, for his vocal opposition to 's support of the politics in Indochina in the 1960s. He was one of the founders of the "" ("Betonamu ni heiwa o! Shimin rengo"), or the . This activity was related to his experience as a in with the ";" he was briefly imprisoned by the . These experiences translated into his novel, "Kagayakeru yami" (Into a Black Sun, 1968), an account of a Japanese journalist experiencing first-hand the life of the Americans and South Vietnamese troops in Vietnam. The novel won the prestigious .

However, Kaikō had a wide range of topics in his repertory. "Natsu no yami" (Darkness in Summer, 1971) was essentially a romance between a reporter and an expatriate Japanese woman living in Europe.

Kaikō enriched the with the word "apache", to denote scavengers of recyclables, described in his novel, "".

Considered a gourmet, in his later years we wrote numerous essays on food and drink, as well as appearing on food-related or fishing-related s and in .

He died of . His grave is at the Shorei-in sub-temple of the Temple complex, .

His former house in has been preserved as a memorial museum.