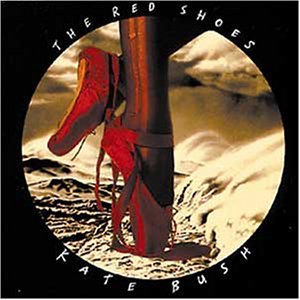 "The Red Shoes" takes its title from the film by Michael Powell and ; the story of the film, and the fairy tale by , which in turn inspired it, concerns a dancer possessed by her art, who cannot shake off the eponymous shoes and find peace.

The musical style was far more simple and direct than on any album since "". The initial plan had been to take the songs out on the road, so Kate deliberately aimed for a live band feel, with less of the studio trickery that had typified her last three albums, and which would be difficult to recreate on stage. The result alienated some of her fan base, who enjoyed the intricacy of her earlier compositions, but others found a new complexity in the lyrics and the emotions they expressed. Gone were the stories and character pieces of her earlier work, replaced by a set of songs that are almost like a diary. This was a troubled time for Kate. She had suffered a series of bereavements, including the loss of her favoured guitarist, , and, most painfully, her mother, Hannah.

Most notably, "The Red Shoes" featured many more high-profile cameo appearances than her previous efforts. Comedian provided guest vocals on "Why Should I Love You?," a track that featured significant contributions from Prince. "And So Is Love" features guitar work by . , from the band , , and also donated their talents to the recording.

A film, " The Line, the Cross & the Curve", written and directed by Kate, and starring herself and English actress ,

For the first time since "Wuthering Heights," in 1978, Kate released two different videos to accompany a single. The European video for "Rubberband Girl" was lifted from ""; Bush recorded a separate one for the single's American release. It features her aping the rock-chick look with big hair, big sunglasses, leather jacket and wind machines, as she lobs her microphone stand around. The video is intercut with clips from "". The album reached her highest position to date in the US -- number 28 in the album charts. It reached number two in the UK.

All songs written by Kate Bush

* A performance of "Rubberband Girl" was filmed as part of "The Line, The Cross and The Curve". This segment of the film was also released on its own as a music video.