The Gauss–Newton algorithm is a method used to solve non-linear least squares problems. It can be seen as a modification of Newton's method for finding a minimum of a function. Unlike Newton's method, the Gauss–Newton algorithm can only be used to minimize a sum of squared function values, but it has the advantage that second derivatives, which can be challenging to compute, are not required.

Non-linear least squares problems arise for instance in non-linear regression, where parameters in a model are sought such that the model is in good agreement with available observations.

The method is named after the mathematicians Carl Friedrich Gauss and Isaac Newton.

Starting with an initial guess

for the minimum, the method proceeds by the iterations

where Δ is a small step. We then have

If we define the Jacobian matrix

and the Hessian matrix in the right can be approximated by

We then take the derivative with respect to Δ and set it equal to zero to find a solution:

This can be rearranged to give the normal equations which can be solved for Δ:

In data fitting, where the goal is to find the parameters β such that a given model function y = f(x, β) fits best some data points (xi, yi), the functions ri are the residuals

Then, the increment Δ can be expressed in terms of the Jacobian of the function f, as

The assumption m ≥ n in the algorithm statement is necessary, as otherwise the matrix JrTJr is not invertible and the normal equations cannot be solved (at least uniquely).

The Gauss–Newton algorithm can be derived by linearly approximating the vector of functions ri. Using Taylor's theorem, we can write at every iteration:

The task of finding Δ minimizing the sum of squares of the right-hand side, i.e.,

is a linear least squares problem, which can be solved explicitly, yielding the normal equations in the algorithm.

The normal equations are m linear simultaneous equations in the unknown increments, Δ. They may be solved in one step, using Cholesky decomposition, or, better, the QR factorization of Jr. For large systems, an iterative method, such as the conjugate gradient method, may be more efficient. If there is a linear dependence between columns of Jr, the iterations will fail as JrTJr becomes singular. 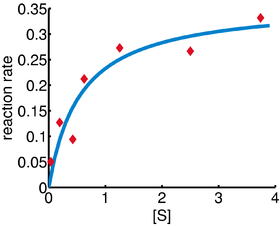 (in blue) versus the observed data (in red).

In this example, the Gauss–Newton algorithm will be used to fit a model to some data by minimizing the sum of squares of errors between the data and model's predictions.

In a biology experiment studying the relation between substrate concentration [S] and reaction rate in an enzyme-mediated reaction, the data in the following table were obtained.

that fits best the data in the least squares sense, with the parameters Vmax and KM to be determined.

Denote by xi and yi the value of [S] and the rate from the table,

matrix with the i-th row having the entries

Starting with the initial estimates of β1=0.9 and β2=0.2, after five iterations of the Gauss–Newton algorithm the optimal values

are obtained. The sum of squares of residuals decreased from the initial value of 1.445 to 0.00784 after the fifth iteration. The plot in the figure on the right shows the curve determined by the model for the optimal parameters versus the observed data.

It can be shown[2] that the increment Δ is a descent direction for S, and, if the algorithm converges, then the limit is a stationary point of S. However, convergence is not guaranteed, not even local convergence as in Newton's method.

The rate of convergence of the Gauss–Newton algorithm can approach quadratic.[3] The algorithm may converge slowly or not at all if the initial guess is far from the minimum or the matrix

is ill-conditioned. For example, consider the problem with m = 2 equations and n = 1 variable, given by

The recurrence relation for Newton's method for minimizing a function S of parameters, β, is

, the gradient is given by

Elements of the Hessian are calculated by differentiating the gradient elements, gj, with respect to βk

The Gauss–Newton method is obtained by ignoring the second-order derivative terms (the second term in this expression). That is, the Hessian is approximated by

are entries of the Jacobian Jr. The gradient and the approximate Hessian can be written in matrix notation as

Convergence of the Gauss–Newton method is not guaranteed in all instances. The approximation

that needs to hold to be able to ignore the second-order derivative terms may be valid in two cases, for which convergence is to be expected.[5]

With the Gauss–Newton method the sum of squares S may not decrease at every iteration. However, since Δ is a descent direction, unless

is a stationary point, it holds that

for all sufficiently small α > 0. Thus, if divergence occurs, one solution is to employ a fraction, α, of the increment vector, Δ in the updating formula

In other words, the increment vector is too long, but it points in "downhill", so going just a part of the way will decrease the objective function S. An optimal value for α can be found by using a line search algorithm, that is, the magnitude of α is determined by finding the value that minimizes S, usually using a direct search method in the interval 0 < α < 1.

In cases where the direction of the shift vector is such that the optimal fraction, α, is close to zero, an alternative method for handling divergence is the use of the Levenberg–Marquardt algorithm, also known as the "trust region method".[1] The normal equations are modified in such a way that the increment vector is rotated towards the direction of steepest descent,

where D is a positive diagonal matrix. Note that when D is the identity matrix and

In a quasi-Newton method, such as that due to Davidon, Fletcher and Powell or Broyden–Fletcher–Goldfarb–Shanno (BFGS) an estimate of the full Hessian,

only so that after n refinement cycles the method closely approximates to Newton's method in performance. Note that quasi-Newton methods can minize general real-valued functions, whereas Gauss-Newton, Levenberg-Marquardt, etc. fits only to nonlinear least-squares problems.

Another method for solving minimization problems using only first derivatives is gradient descent. However, this method does not take into account the second derivatives even approximately. Consequently, it is highly inefficient for many functions, especially if the parameters have strong interactions.