:"This article is about a film. For the article about the novel on which it is based, see ". 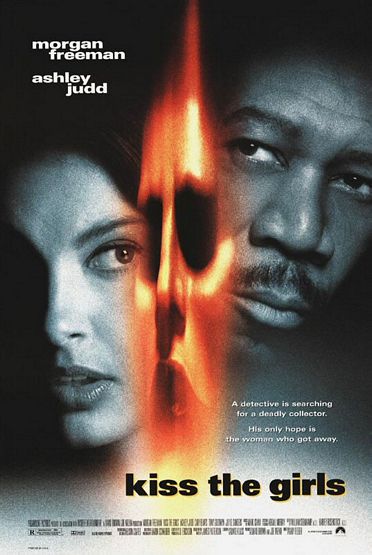 caption = Theatrical poster
director =
writer =
Based on the novel by
starring =


"Kiss the Girls" is a 1997 American thriller film directed by . The by is based on the bestselling 1995 novel of the same name by .

Although "Kiss the Girls" was the second book in Patterson's series, it was filmed before its predecessor, "", which was adapted for a feature film in 2001.

and forensic psychologist Alex Cross heads to when his niece Naomi, a college student, is reported missing. He learns from the local police, including Nick Ruskin, that Naomi is the latest in a series of young women who have vanished. Soon after his arrival, one of the missing women is found dead, bound to a tree in a desolate forest, and shortly after that, intern Kate McTiernan is kidnapped from her home.

When she awakens from a drugged state, Kate discovers she is being held captive by a masked man calling himself Casanova, and she is one of several prisoners trapped in his lair. She manages to escape and is severely injured when she jumps from a cliff and into a river to escape from his clutches. After she recuperates, she joins forces with Cross to track down her sadomasochist captor, who Cross concludes is a collector, not a killer, unless his victims fail to follow his rules. This means there is time to rescue the other imprisoned women, just as long as they remain subservient.

Clues lead them to , where a series of gruesome kidnappings and murders have been credited to a man known as the Gentleman Caller. Cross deduces he is working in collusion with rather than imitating his East Coast counterpart, but his efforts to capture and question him are foiled and the man escapes. Upon returning to North Carolina, he eventually discovers the underground hideaway used by, as well as the true identity of, the man who calls himself Casanova.

The film was shot on location at in Durham, in Chapel Hill, in the Research Triangle region of , the in Pasadena, and the in University Park.

Stephen Holden of the "" said the film "is cut from the same cloth as "The Silence of the Lambs", but the piece of material it uses has the uneven shape and dangling threads of a discarded remnant ... [It] begins promisingly, then loses its direction as the demand for accelerated action overtakes narrative logic." Of Morgan Freeman, he said, " [He] projects a kindness, patience and canny intelligence that cut against the movie's fast pace and pumped-up shock effects. His performance is so measured it makes you want to believe in the movie much more than its gimmicky jerry-rigged plot ever permits." [ [http://www.nytimes.com/library/film/971003kiss-film-review.html "New York Times", October 3, 1997] ]

In the "", said, "David Klass, the screenwriter, gives Freeman and Judd more specific dialogue than is usual in thrillers; they sound as if they might actually be talking with each other and not simply advancing plot points ... [They] are so good, you almost wish they'd decided not to make a thriller at all - had simply found a way to construct a drama exploring their personalities." [ [http://rogerebert.suntimes.com/apps/pbcs.dll/article?AID=/19971003/REVIEWS/710030301/1023 "Chicago Sun-Times", October 3, 1997] ]

Rita Kempley of the "" called the film "a tense, scary, perversely creepy thriller" and added, "David Klass ... blessedly deletes the graphic descriptions of torture and rape included in the novel. Unfortunately, he also neglects to include any explanation of Casanova's behavior. Otherwise "Kiss the Girls" does what it's supposed to do. A solid second film from director Gary Fleder, it's sure to set pulses racing and spines tingling." [ [http://www.washingtonpost.com/wp-srv/style/longterm/movies/review97/kissthegirlskemp.htm "Washington Post", October 3, 1997] ] In the same newspaper, Desson Howe felt "The movie ... operates on the crime-movie equivalent of automatic pilot. It takes off, flies and lands without much creative intervention." [ [http://www.washingtonpost.com/wp-srv/style/longterm/movies/review97/kissthegirlshowe.htm, "Washington Post", October 3, 1997] ]

In the "", Peter Stack thought "the story ... goes on too long. It has too many confusing plot twists and keeps losing energy. Blame it on Hollywood excess, or director Gary Fleder's uncertain hand. A cut of 15 minutes would have helped." He was more impressed by the film's stars, calling Morgan Freeman "compelling ... a hero of extraordinary power that comes almost entirely from his unemotional, calculating calm" and stating Ashley Judd "gives the sometimes plodding drama a dose of intense vitality. This young actress is getting awfully good at turning potentially gelatinous characters into substantive people who spark viewer interest." [ [http://www.sfgate.com/cgi-bin/article.cgi?f=/c/a/1997/10/03/DD43624.DTL "San Francisco Chronicle", October 3, 1997] ]

Ashley Judd was nominated for the Satellite Award for Best Supporting Actress in a Motion Picture Drama.