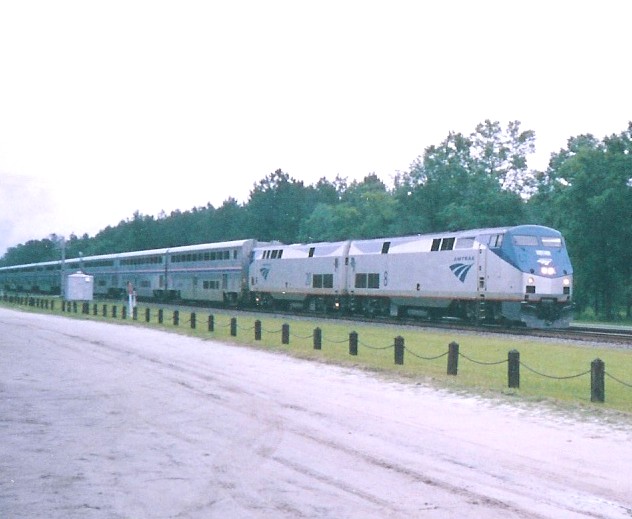 Auto Train is an convert|855|mi|km|sing=on long scheduled train service for passengers and their automobiles operated by between (near ) and (near Orlando). Although there are similar services around the world, the Auto Train is the only one of its kind in the United States.

Specialized equipment enables customers to take along their automobile, van, sport utility vehicle, motorcycle, small trailer, or jet-ski as they travel up or down the . Passengers ride either in wide coach seats or private rooms while their vehicles are carried in enclosed automobile-carrying freight cars, called s. The train also includes lounge cars and s. The Auto Train service offers its passengers dual benefits: they avoid the long drive on busy in , , , Georgia, and , and instead of the expense and unfamiliarity of a rental car they have the convenience of the use of their own vehicle upon arrival.

The service operates as train 53 southbound and 52 northbound, making no station stops between its terminals at and . Amtrak's Auto Train is the successor to an earlier similarly-named service operated by the privately-owned in the 1970s.

The original Auto-Train operated on and tracks. It was operated by , a privately-owned railroad which used its own to provide a unique rail transportation service for both passengers and their automobiles in the United States, operating scheduled service between (near ) and , near Orlando.

The founder of Auto-Train Corporation was . His approach allowed families to relax en route and save the expense and unfamiliarity of a rental car on arrival. Passengers rode either in wide coach seats or private first-class sleeping compartments while their vehicles were carried in enclosed s. The train included s and meals were served.

The equipment of the Auto-Train Corporation was painted in red, white, and purple colors. The typical train was equipped with two or three U36B s, 76' double-deck auto carriers, streamlined passenger cars, including coaches, s, s, and 85 full-, and a , then an unusual sight on most passenger trains.

Auto-Train Corporation's new service began operations on , . The service was a big hit with travelers. Before long, the ambitious entrepreneurs of Auto-Train were looking to expand into other markets. However, only the Lorton-Sanford service proved successful.

Auto-Train's first auto carriers were acquired used, and started life in the 1950s as a new innovation for (CN) Railroad. The CN bi-level cars had end-doors. They were huge by the standards of the time; each 75-footer could carry 8 vehicles. The cars were a big success and helped lead to the development of today's enclosed autoracks. The former CN autoracks were augmented by new tri-level versions in 1976. High crew costs, several spectacular accidents with the 58- to 64-car trains, and an unprofitable expansion to put Garfield's company into bankruptcy. Auto-Train Corporation was forced to end its services in late April, 1981.

Operating for almost 10 years, Auto-Train had developed a popular following, particularly among older travelers as it ferried passengers and their cars between Virginia and Florida.

However, no one else offered a service quite like that of Auto-Train: transport a car and its passengers together (on the same movement, at the same time) to and from vacation areas. In 1983, the , better known as , a federally-chartered corporation which operates most intercity passenger trains in the United States, acquired Auto-Train Corporation terminals in Lorton and Sanford and some of the rolling stock, including the autoracks. Amtrak began its renamed Auto Train route service between Virginia and Florida on a 3 day per week basis after a 22 month gap, expanding it to daily trips the following year.

Today, Amtrak's Auto Train carries about 200,000 passengers and generates around $50 million in revenue annually. Operating on leased trackage for the entire route, it is considered Amtrak's best-paying train in terms of income versus operating expenses.

The acquired a fleet of thirteen U36B s. These were very similar to ones used by , the host railroad for most of the route's length. The passenger railcars, including coaches, s, s, and , were acquired from various major railroads, including Santa Fe, , and Western Pacific. The Auto-Train's first s were convert|75|ft|m|sing=on-long bilevel models with end doors, carrying eight automobiles each. The cars had originally been owned by , the railroad that had pioneered the use of autoracks in the North American freight rail industry beginning in late 1957. The bilevel autoracks were augmented by trilevel ones that were purchased new in 1976.

Since the form and function of the autoracks went far beyond the form and function of baggage cars on an ordinary passenger train, the Auto-Train, like the Amtrak Auto Train of today, can be considered to have been not a pure passenger train but rather a mixed train, meaning one that includes both passenger and freight railcars. Like many mixed trains of the time, but unlike virtually all pure passenger trains of any era, the Auto-Train included a at the end. Like the rest of the equipment, the cabooses were painted in a red, white, and purple color scheme.

A typical Auto-Train was made up of 30 to 64 cars pulled by two or three locomotives.

The Auto-Train began operations on , . The service enjoyed remarkable success with travelers, and reported profits for the first few years. Before long, the Auto-Train Corporation's ambitious leadership was looking to expand into other markets. A second service, from to Sanford, was inaugurated in May 1974. It operated only until September 1977, however, reportedly having lost millions of dollars. Two Auto-Train derailments in 1976 and a major derailment in 1978Fact|date=August 2008 disrupted service, and cost the company more than $6 million in lost revenue. Debts accumulated, including millions in taxes, leading to cutbacks in maintenance that slowed operations. Eventually the company was forced into bankruptcy; and though the Auto-Train retained much of its popularity to the end, it terminated its services in late April 1981.

Several smaller companies scrambled to pick up the Auto-Train's former customers. A company operating as Auto-Bus carried its customers in buses and their cars in trucks, operating between Pennsylvania and Florida. Another company, Autolog Corporation, offered a service to carry cars by truck between the Northeast and Florida, though not providing transportation for the customers themselves. There were also several companies that hired drivers to take cars individually to their owners' destinations. No one else, however, offered a service quite like that of the Auto-Train, namely transporting a car and its passengers simultaneously to and from Florida.

While their service ultimately failed (as so many American passenger train services had previously failed in the decades prior to Amtrak's startup in 1971), Garfield and Auto-Train Corporation had identified a service that people wanted.

Amtrak steps in to fill the gap

After a period of 22 months without service, the service was revived by the , better known as , the corporation that operates most intercity passenger trains in the United States. Amtrak acquired the terminals in Lorton and Sanford and some of the Auto-Train equipment. On , , it introduced its new version of the service (under the slightly modified name "Auto Train") on a triweekly basis. Daily service was introduced a year later.

Amtrak continued to use the bilevel and the trilevel s that Auto-Train had used. For passenger equipment, it initially used a mixture of former Auto-Train railcars and midcentury long-distance railcars from Amtrak's general fleet, all rebuilt to Amtrak's "Heritage Fleet" standards. In the mid 1990s, Amtrak replaced all these passenger railcars, which were of the conventional single-level type, with its newer, bilevel Superliner I and II equipment. In 2006, the aging bi-level, tri-level, and "van" s were phased out and replaced with 80 new autoracks. Unlike the old racks, the new racks have uniform heights, and are most similar to the "vans" of the previous fleet. As of|2008, an Auto Train is normally made up of two P42 s and thirty or more railcars (passenger and autorack), for a total length of a 3/4 mile or more. A typical train will have 6 sleepers, a diner and lounge for sleeper passengers, 4 coaches, and 2 diners and a lounge for coach passengers. The s run on the rear. There is no caboose.

Amtrak's Auto Train has the longest consist of any passenger train in the world,Fact|date=June 2008 although (as mentioned above) it may be best regarded as a mixed train, rather than as a pure passenger train. Currently, two Auto Train consists are in simultaneous operation each day. At 4:00 p.m., there are departures from both the Lorton and Sanford terminals. is the only scheduled stop on the convert|855|mi|km|sing=on run: at this stop, the train is refueled and serviced and the engine crew and conductors are changed, but no passengers are entrained or detrained. Each train is scheduled to arrive at the other end the next morning at 9:30 a.m., for an endpoint-to-endpoint average speed of about 49 miles per hour.

In fiscal year 2006, Amtrak's Auto Train carried about 207,444 passengers, including 87,802 sleeper passengers [Amtrak September 2006 Monthly Report, pp. A-3.3 and A-3.4, http://www.amtrak.com/pdf/0609monthly.pdf, retrieved , ] . It operates on the same route it and its predecessor have always used, the route now being owned by . The train is notable, especially within the Amtrak system, for the high quality of its equipment and of its customer service. The train grossed $49,351,664 in ticket revenue in Fiscal Year 2006, making it Amtrak's highest grossing single train. With total expenses of $62.1 million [Amtrak September 2006 Monthly Report, pg. C-1, http://www.amtrak.com/pdf/0609monthly.pdf, retrieved , ] , it is Amtrak's best-paying long distance train in terms of income in comparison with operating expenses.

Lorton, Virginia is about a half-hour drive south of Washington, D.C., just off Interstate 95. Amtrak's new Lorton terminal opened in early 2000, and features a large, modern waiting area with high glass walls. The station was designed by architect Hanny Hassan. The suspended sculpture in the lobby was designed by [http://www.patsheridan.com Patrick Sheridan] . Outside the waiting room are the tracks where passenger cars are set out for boarding. The platform is 1,480 feet (about 3/10 of a mile) long.

Lorton was selected as site of the northern terminal because the autoracks were too tall to pass through the Washington, D.C. train tunnels.Fact|date=June 2008

The Sanford Auto Train terminal is about a half-hour drive north of Orlando. It is an older and smaller facility than the terminal at Lorton. Currently, the Auto Train loads its passengers on two tracks in Sanford, as no one track is long enough to accommodate all the passenger railcars. Sanford's operation is also unique in the crossing that runs through the yard. This complicates some switching procedures and also produces the need for a three-man yard conductor crew – conductor, assistant conductor, and footboards – as opposed to Lorton's two-man operation (conductor and assistant conductor). Both yards operate with one engineer. Sanford serves as the main mechanical location for Auto Train, with diesel and car shops to service the fleet. Superliners and engines needing to be rotated out are usually deadheaded to Lorton and then swapped out through an extra move to Ivy City in Washington. Amtrak and the state of Florida are working on plans to replace the facility in Sanford with a new terminal that can accommodate large numbers of passengers more comfortably.