The Markhor (Capra falconeri) is a large species of wild goat that is found in northeastern Afghanistan, Pakistan (Gilgit-Baltistan, Hunza-Nagar Valley, northern and central Pakistan, and some parts of Jammu and Kashmir), India, southern Tajikistan and southern Uzbekistan. The species is classed by the IUCN as Endangered, as there are fewer than 2,500 mature individuals which continued to decline by an estimated 20% over two generations.[1] The Markhor is the national animal of Pakistan.

The colloquial name is thought by some to be derived from the Persian word mar, meaning snake, and khor, meaning "eater", which is sometimes interpreted to either represent the species' ability to kill snakes, or as a reference to its corkscrewing horns, which are somewhat reminiscent of coiling snakes.[2] As the folklore goes, Markhor has the ability to kill a snake and eat it. Thereafter while chewing the cud, a foam like substance comes out of its mouth which drops on ground and dries. This foam like substance is sought after by the local people who believe it is useful in extracting snake poison from snake bitten wounds.

Markhor stand 65 to 115 centimetres (26 to 45 in) at the shoulder, 132 to 186 centimetres (52 to 73 in) in length and weigh from 32 to 110 kilograms (71 to 240 lb).[2] It has the highest maximum shoulder height among the species in the genus Capra, but is surpassed in length and weight by the Siberian Ibex.[4] The coat is of a grizzled, light brown to black colour, and is smooth and short in summer, while growing longer and thicker in winter. The fur of the lower legs is black and white. Markhor are sexually dimorphic, with males having longer hair on the chin, throat, chest and shanks.[2] Females are redder in colour, with shorter hair, a short black beard, and are maneless.[5] Both sexes have tightly curled, corkscrew-like horns which close together at the head, but spread upwards toward the tips. The horns of males can grow up to 160 cm (64 inches) long, and up to 25 cm (10 inches) in females.[2] They have a pungent smell, which surpasses that of the domestic goat.[6] 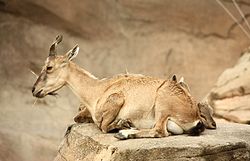 Female with young, at the Columbus Zoo.

Markhor are adapted to mountainous terrain, and can be found between 600–3,600 meters in elevation. They typically inhabit scrub forests made up primarily of oaks (Quercus ilex), pines (Pinus gerardiana), and junipers (Juniperus macropoda).[1] Markhor are diurnal, and are mainly active in the early morning and late afternoon. Their diet shifts seasonally: in the spring and summer periods they graze, but turn to browsing in winter, sometimes standing on their hind legs to reach high branches. The mating season takes place in winter, during which, the males fight each other by lunging, locking horns and attempt to push each other off balance. The gestation period lasts 135–170 days, and usually result in the birth of one or two kids, though rarely three. Markhor live in flocks, usually numbering nine animals, composed of adult females and their young. Adult males are largely solitary. Their alarm call closely resembles the bleating of domestic goats.[2] Early in the season the males and females may be found together on the open grassy patches and clear slopes among the forest. During the summer, the males remain in the forest, while the females generally climb to the highest rocky ridges above.[5]

Currently, only three subspecies of Markhor are recognised by the IUCN:[1] 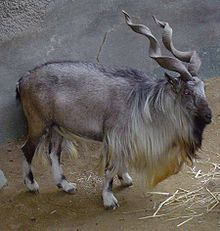 Bukharan markhor in captivity at the Los Angeles Zoo

Within Afghanistan, the Astor markhor is limited to the east in the high and mountainous monsoon forests of Laghman and Nuristan. In India, this subspecies is restricted to a portion of the Pir Panjal range in southwestern Jammu and Kashmir. Throughout this range, Astor markhor populations are scattered, starting east of the Banihal pass (50 km from the Chenab river) on the Jammu-Srinagar highway westward to the disputed border with Pakistan. Recent surveys indicate that it still occurs in catchments of the Limber and Lachipora rivers in the Jhelum Valley Forest Division, and around Shupiyan to the south of Srinagar. The Astor markhor there is restricted to the Indus and its tributaries, as well as to the Kunar (Chitral) river and its tributaries. Along the Indus, it inhabits both banks from Jalkot (Kohistan District) upstream to near the Tungas village (Baltistan), with Gakuch being its western limit up the Gilgit River, Chalt up the Hunza River, and the Parishing valley up the Astore River. It has been said to occur on the right side of the Yasin valley (Gilgit District), though this is unconfirmed. The flare-horned markhor is also found around Chitral and the border areas with Afghanistan where it inhabits a number of valleys along the Kunar river (Chitral District), from Arandu on the west bank and Drosh on the east bank, up to Shoghor along the Lutkho river, and as far as Barenis along the Mastuj River. The largest population is currently found in Chitral National Park in Pakistan. [1]

Although the Bukharan markhor formerly lived in most of the mountains stretching along the north banks of the Upper Amu Darya and the Pyanj rivers from Turkmenistan to Tajikistan, two to three scattered populations now occur in a greatly reduced distribution. It is limited to the region between lower Pyanj and the Vakhsh rivers near Kulyab in Tajikistan (about 70”E and 37’40’ to 38”N), and in the Kugitangtau range in Uzbekistan and Turkmenistan (around 66’40’E and 37’30’N). This subspecies may possibly exist in the Darwaz peninsula of northern Afghanistan near the border with Tajikistan. Before 1979, almost nothing was known of this subspecies or its distribution in Afghanistan, and no new information has been developed in Afghanistan since that time.[1]

Until 1978, the Kabul markhor survived in Afghanistan only in the Kabul Gorge and the Kohe Safi area of Kapissa, and in some isolated pockets in between. It now lives the most inaccessible regions of its once wider range in the mountains of Kapissa and Kabul Provinces, after having been driven from its original habitat due to intensive hunting. In Pakistan, its present range consists only of small isolated areas in Baluchistan, a small area in NWFP, and one unconfirmed occurrence in Dera Ghazi Khan District (Punjab Province). The NWFP Forest Department considered that the areas of Mardan and Sheikh Buddin were still inhabited by the subspecies. At least 100 animals are thought to live on the Pakistani side of the Safed Koh range (Districts of Kurram and Khyber).[1]

Relationship with the domestic goat

Certain authors have postulated that the markhor is the ancestor of some breeds of domestic goat. Charles Darwin postulated that modern goats arose from crossbreeding markhor with wild goats.[7] Other authors have put forth the possibility of markhor being the ancestor of some Egyptian goat breeds, due to their similar horns, though the lack of an anterior keel on the horns of the markhor belie any close relationship.[8] The Changthangi domestic goat of Ladakh and Tibet may derive from the markhor.[9] The Girgentana Goat of Sicily is thought to have been bred from Markhor,[10] as is the Bilberry goat of Ireland.[11] The Kashmiri feral herd of about 200 individuals on the Great Orme limestone headland of Wales are derived from a herd maintained at Windsor Great Park belonging to Queen Victoria.[12]

In British India, Markhor were considered to be among the most challenging game species, due to the danger involved in stalking and pursuing them in high, mountainous terrain.[13] According to Arthur Brinckman, in his The rifle in Cashmere "a man who is a good walker will never wish for any finer sport than ibex or markhoor shooting".[14] Elliot Roosevelt wrote of how he shot two markhor in 1881, his first on the 8th of July, his second in the 1st of August.[15] Although it is illegal to hunt markhor in Afghanistan, they have been traditionally hunted in Nuristan and Laghman, and this may have intensified during the War in Afghanistan. In India, markhor are still hunted for food near the Pakistani border. Markhor are still hunted for food and for their horns, which are thought to have medicinal properties, in Tajikistan, Turkmenistan, and Uzbekistan.[1] Markhor have also been successfully introduced to private game ranches in Texas. Unlike the Auodad, Blackbuck, Nilgai, Ibex, and Axis Deer, however, Markhor have not escaped in sufficient numbers to establish free-range wild populations in Texas.

The International Union for the Conservation of Nature and Natural Resources has classified the Markhor as an endangered species, meaning it is in danger of facing extinction in the near future if conservation efforts are not maintained. Numbers between 2,000 and 4,000 exist in the wild.

The Markhor is the national animal of Pakistan. It was one of the 72 animals features on the WWF Conservation Coin Collection in 1976. Markhor marionettes are used in the Afghan puppet shows known as buz-baz.