The Port of Runcorn is in the town of Runcorn, Cheshire, England. It is situated to the west of a point where the River Mersey narrows, known as Runcorn Gap. Originally opening directly into the Mersey, with the building of the Manchester Ship Canal, it now links with this canal.

Until the 18th century, the major port in northwest England was Chester. However silting of the River Dee prevented access to Chester and in 1708 Thomas Steers was commissioned to build the first wet dock in Liverpool.[1] By 1710 Liverpool had become the third largest port in the country contributing £50,000 in customs revenue.[2] During the early-mid 18th century the major materials passing through Liverpool were salt from Cheshire and coal from the Lancashire coalfields. Other important materials were building stone, roofing slates from North Wales, and ores, particularly copper ore, from Anglesey. Later came imports of cotton, timber and grain to Manchester, and potters' materials to The Potteries.[3] These materials were carried mainly by flat-bottomed barges known as Mersey flats.[4] In the mid-Mersey area communications were being improved by the development of inland waterways, including the Sankey Canal from St Helens to Warrington which was completed in 1757,[5] the Mersey and Irwell Navigation, the act for which achieved Royal Assent in 1720,[6] and the Bridgewater Canal from Manchester to Runcorn, which opened throughout its length in 1776.[7] 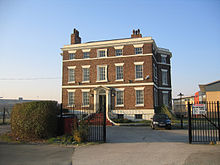 There is the possibility that a small port was in existence at Runcorn in the Roman era.[8] However before 1780 Runcorn could not have been described as even a minor port. The construction of a port of any significance did not start until after the arrival of the Bridgewater Canal. A line of ten locks connected the Runcorn basin of the canal with the Mersey at a position to the west of Runcorn Gap. Close to this point the Duke of Bridgewater built two tidal basins, two warehouses, a dry dock and a house, Bridgewater House, from which to supervise the work.[7] To the west of this area he later built the dock, which opened in 1791.[9]

Tidal dock at the end of the Bridgewater Canal in 2004

Throughout this time the port of Runcorn remained part of the port of Liverpool.[13] Towards the middle of the 19th century the port was becoming more important and this was recognised on 5 April 1847 when it was designated as an independent customs port. Its boundary extended on both sides of the Mersey from Warrington Bridge in the east to a point on a line stretching from Eastham church in Cheshire to Chapel Farm House in Lancashire. It included the waters of the River Weaver up to Frodsham Bridge.[17] It included, on the north bank of the Mersey, Widnes Dock, the first purpose-built railway dock in the world.[18] A more dignified customs house was built to mark the event.[17] However Runcorn's status as an independent customs port was not a success. Few large ships were registered in the port or transferred from the Liverpool register and on 12th April 1850 it became part of the Port of Liverpool again.[19] However the port's prospects improved at this time with the abolition of the Navigation Acts (which had restricted the use of foreign shipping), and an increasing number of foreign vessels began to arrive at the docks.[20] Trade increased so much that the Bridgewater Trustees were having difficulty in coping with the increased trade. In 1853 an act promoted by the Earl of Ellesmere led to the construction of a short canal, the Runcorn and Weston Canal, which connected the Francis Dock to the Weston Canal. This was opened for traffic on 25 February 1860. At this time the Runcorn docks were coming under increasing competition from the railways, especially from the St Helens Canal and Railway Company who opened Garston Dock downstream on the north bank of the Mersey.[21]

Runcorn was appointed again as an independent customs port on 1 January 1862.[22] In 1860 the Bridgewater Trustees had opened the Alfred Dock, which was fitted with hydraulic cranes.[23] In 1862 a telegraph line was installed which linked the dock with the Bridgewater Trustees' offices in Manchester and their dock in Liverpool.[24] From around this time there was a considerable increase in trade; in April of that year over 110 vessels entered the port, which was more than could be conveniently accommodated.[25] In order to deal with the increased trade the Bridgewater Trustees began to build a new dock in 1867 and to remove obstructions from the river.[26] The new dock was the Arnold Dock and this was opened in 1870.[27] Before the repeal of the Navigation Acts most of the trade had been coastal; there now came a considerable increase in foreign trade. In 1845 foreign trade had been virtually nothing; in 1871 the export trade amounted to 43,000 tons and the imports more than 30,000.[28] Matters were not as successful with the Mersey and Irwell business because there had been no major dock improvements since 1829 and the approach channels were silting up.[29] On the north bank of the Mersey, West Bank Dock at Widnes was busy especially with importing raw materials and exporting chemicals and fertilisers. The other major materials passing through the port were raw cotton, potter's clay, salt, coal and soap.[30]

During the 1870s the business of the port was beginning to decline because of the progressive silting of the shipping channels.[31] When the Duke of Bridgewater died in 1803 he left his coal mining and canal businesses to be run by a Trust. In 1872 the navigation part of the trust was sold to the Bridgewater Navigation Company at a cost of £1,115,000; this consisted of the Bridgewater Canal and the Mersey and Irwell Navigations, together with their docks and warehouses.[32] The company developed further improvements including a new dock, the Fenton Dock (named after the chairman of the company) which was completed in 1875 at a cost of £50,000. This was equipped with hydraulic cranes and served by high level tramways and railway sidings. Meanwhile the Weaver Trustees were developing their trade, having built the Delamere Dock in 1870.[33] The engineer for this dock was Edward Leader Williams who later became the engineer for the Manchester Ship Canal.[34] There were no further large scale developments at the port until the Tollemache Dock was opened at Weston Point in 1885.[35]

Coming of the Manchester Ship Canal

From about 1877 the silting of the channels started to improve and trade improved again.[36] The improvement continued until 1889 when the construction of the Manchester Ship Canal caused problems. Trade declined again and in 1894 the independent customs Port of Runcorn was abolished being incorporated in the Port of Manchester.[37] Construction of the ship canal began in November 1877. On 3 August 1887 the Manchester Ship Canal Company had purchased the Bridgewater Navigation Company for £1,710,000, thus acquiring the Bridgewater Canal and its docks and the Mersey and Irwell system.[38] The ship canal allowed large ocean-going ships to travel to the Port of Runcorn. The canal was completed from Eastham to Weston Point by 1892 and in July of that year a temporary port, called Saltport, was established at the mouth of the River Weaver.[39] By 1893 the ship canal was opened as far as the Old Quay Dock.[40] In order to allow direct access to the Port of Runcorn and the Weaver Navigation four locks were built. Weston Marsh lock at the mouth of the Weaver allowed access to the Weaver Navigation, Weston Mersey lock enabled entrance to the Weaver Docks, the Bridgewater docks were served by the Bridgewater lock and the Old Quay dock by the Runcorn Old Quay lock.[41] The ship canal was opened throughout its length in 1894. Saltport was bypassed and a few years later it was dismantled.[42] To the east of the Bridgewater Dock the ship canal passes under Runcorn Railway Bridge which has a clearance of 75 feet (23 m) above the high water mark of the Mersey.[43] This meant that the larger of the tall ships could not pass under the bridge. A lay-by was therefore built for these ships to discharge their cargo, which was carried onwards by a lighter to its destination.[42] The lay-by was big enough to accommodate the largest merchant vessels of the day.[44] While the larger vessels approached the Runcorn docks by way of the ship canal, the smaller vessels sailed up the Mersey and entered the docks through the locks.[45]

From the opening of the ship canal there was a temporary improvement in trade for the Runcorn docks but a decline set in from the turn of the century. There was a short revival after the First World War but this was not maintained. Improvements were made to Bridgewater Docks in 1935 but this was unsuccessful. By 1950 the docks were "virtually moribund".[46] At Runcorn docks trade declined from 124,428 tons in 1925 to 32,881 tons in 1951, and at Weston Point dock from 200,000 tons in 1938 to 40,000 tons in 1954.[47] The old line of locks from the Bridgewater Canal became disused in the late 1930s, they were closed under the Ship Canal Act of 1949 and filled in. The Ship Canal Act of 1966 allowed the closure of the new line of locks, the old dock area and the Francis and Arnold Docks. The Runcorn and Weston Canal has been filled in to provide additional quay space for modern docks and the old warehouses have been demolished. However with the building of the Silver Jubilee Bridge in 1961 communications to the docks have been improved and trade has begun to recover again. The dock entrance has been widened and the docks deepened. Trade increased from 50,000 tons in 1957 to 773,000 tons in 1973.[48]

The site now contains two ports, Runcorn Docks and the Port of Weston.

Runcorn Docks is owned by the Manchester Ship Canal Company which is now part of the Peel Ports Group.[49] It now comprises Francis Dock, Alfred Dock and Fenton Dock.[50] It can take ships with cargoes up to 5000 tonnes with a maximum length of 350 feet (107m) and maximum draught of 7 metres.[51] The adjacent canal lay-by has a deepwater berth of 168m. It has pipelines handling chemical and other liquid cargoes connecting to adjacent storage facilities and to the Ineos Chlor network.[52]

In August 2007 the owners of the Port of Weston, The Westbury Property Fund, merged with the Eddie Stobart Group to form the Stobart Group Limited. This group plans to develop the site into an inter-modal port facility to enable freight, currently carried by road, to be transported by rail and water. This will mean increased warehousing, new container handling facilities, an extension to the existing West Coast main line rail siding, a new link road, and improved navigable access between the dock and the Manchester Ship Canal.[53][54]