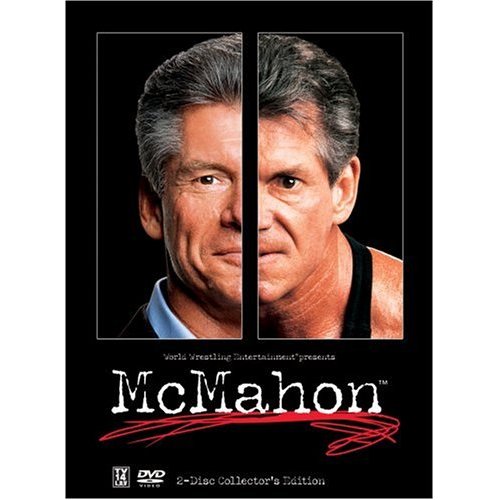 "McMahon" is a DVD produced by that reflects back on the career of (Mr. McMahon).

McMahon's famous feud with is looked at, and the evolution of the "Mr. McMahon" character comes with two alternative points of view from Vince himself and Jerry Lawler, who have different opinions on when the character was born. Vince believes it to have occurred when , in his memorable "Crybaby Heel" role, shoved him down after a cage match before embarking on a venomous "worked" shoot promo in February 1997, and Lawler believes it to be during and after the events of the .

XFL and other business ventures

Vince's vast media ventures beyond wrestling are given attention, such as his humanitarian work, his "Tribute To The Troops" wrestling shows based in , and the dismal failure of the , which Vince still believes to be a valid concept, and points out that the NFL now uses many of the ground breaking innovations that the XFL introduced. ECW commentator gives a honest account on what the XFL's problems were, stating that it didn't try to separate itself from the World Wrestling Federation and create its own identity.

, , Kevin Dunn, and all reflect on the instances they had been fired by Vince for real. also remembers Vince firing him as General Manager of "SmackDown!" in storyline terms, though he would eventually be laid off for real in 2006.

The McMahon's on-screen dysfunctional soap opera antics are focused on, which slowly begins to dovetail into coverage of the real life romance that developed between and despite initially beginning as a mere angle for television. Vince comments on the fears and criticisms that come with a performer being "attached to the boss's daughter" and that he himself put those same feelings to the test by "intervening" and keeping the two apart until he was sure they really loved each other.

Greg Gagne accuses Vince of destroying his father Verne and the AWA, almost everyone besides Vince talks of how horrible the angle was, and many wrestlers discuss how stubborn Vince can be and how he refuses to listen to others. It also became apparent that some have been offended by McMahon claiming to be the leader of a religion called McMahonism. Somewhat conveniently, there is no mention of the steroid trial or the failure of the WBF on the DVD. However, in the trailer for the "McMahon" DVD, it did give the impression the WBF would be talked about as the WBF logo appeared on the screen as the narrator was talking about McMahon's "greatest failures."

Also, comments that she had to nix a potential angle. According to her, Vince was to reveal himself as the father of her baby; when she said no, he pushed for Shane to be the father, but she turned that idea down as well. She also nixed Vince's idea that her wedding to Triple H be aired live on PPV and said that the only reason Vince ever hired was to be able to say that his longtime nemesis once worked for him.

Amongst the extras on the DVD are additional comments on McMahon, Stephanie tearfully recalls memories of her childhood, William Regal tells of how Vince looked after him during his struggles with drug addiction, and McMahon's infamous performance of "Stand Back" at the 1987 .

*with vs. Steve Austin - Handicap :King of the Ring, ,

*vs. - No Holds Barred match:Armageddon, ,