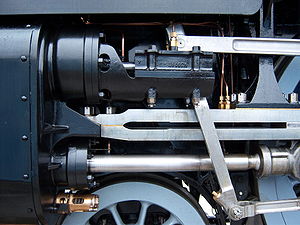 The 'motion' on the left-hand side of 60163 Tornado. The black casting to the left houses the cylinder, in which slides the piston; the piston rod is immediately above the wheel.

The cylinders of a steam locomotive are the components that convert the power stored in the steam into motion.

Cylinders may be arranged in several different ways.

On early locomotives (e.g. Puffing Billy) the cylinders were often set vertical and the motion was transmitted through beams, as in a beam engine.

The next stage (e.g. Stephenson's Rocket) was to drive the wheels directly from steeply inclined cylinders placed at the back of the locomotive. Direct drive became the standard arrangement but the cylinders were moved to the front and placed either horizontal or nearly horizontal.

Inside or outside cylinders

The front-mounted cylinders could be placed either inside (between the frames) or outside. Examples:

On a two-cylinder engine the cranks, whether inside or outside, are set at 90 degrees. As the cylinders are double-acting (i.e. fed with steam alternately at each end) this gives four impulses per revolution and ensures that there are no dead centres.

On a three-cylinder engine, two arrangements are possible:

Two arrangements are also possible on a four-cylinder engine:

The valve chests or steam chests which contain the slide valves or piston valves may be located in various positions.

On inside cylinder engines the valve gear is nearly always inside (between the frames), e.g. LMS Fowler Class 3F.

On engines with outside cylinders there are three possible variations:

There are three common variations:

There are three common variations: 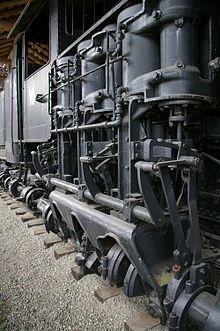 The cylinders on a Shay locomotive.