The Dassault/Dornier Alpha Jet is a light attack jet and advanced trainer aircraft co-manufactured by Dornier of Germany and Dassault-Breguet of France. 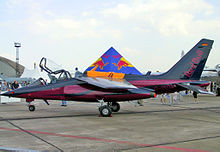 In the early 1960s, European air forces began to consider their requirements for the coming decades. One of the results was the emergence of a new generation of jet trainers to replace such aircraft as the Lockheed T-33 and Fouga Magister. The British and French began a collaboration on development of what was supposed to be a supersonic jet aircraft in two versions: trainer and light attack aircraft. The result of this collaboration, the SEPECAT Jaguar, proved to be an excellent aircraft, but its definition had changed in the interim, and the type emerged as a full-sized, nuclear-capable strike fighter, which two-seat variants were used for operational conversion to the type, not for the general training.

This left the original requirement unfulfilled and so the French began discussions with West Germany for collaboration. A joint specification was produced in 1968. The trainer was now subsonic, supersonic trainers having proven something of a dead end. A joint development and production agreement was signed in July 1969 which indicated that the two nations would buy 200 machines, each assembled in their own country.

Proposals were generated by three groups of manufacturers:

All the proposals were to be powered by twin SNECMA Turbomeca Larzac turbofans. The Luftwaffe had insisted that the trainer have two engines after suffering severe attrition from accidents with their single-engine Lockheed F-104 Starfighter.

The Breguet-Dassault-Dornier TA501 was declared the winner of the competition in July 1970, with full development approved in February 1972. Two prototypes were to be built by Dassault in France (that company having bought out Breguet in the meantime) and two were to be built by Dornier in Germany. The first French prototype performed its first flight at Istres on 26 October 1973, with the first German prototype following from Oberpfaffenhofen on January 9, 1974. The remaining two prototypes were in the air before the end of 1974.

The French Air Force decided to use the Alpha Jet primarily as a trainer, and the first production Alpha Jet for the French performed its first flight on 4 November 1978. The French variant was known as the Alpha Jet E (the "E" standing for Ecole, French for "School") or Alpha Jet Advanced Trainer/Light Attack aircraft. Initial deliveries to France for service trials were in 1978, leading to introduction to line service in May 1979, replacing the Canadair T-33 and Fouga Magister in jet training and the Dassault Mystère IVA in weapons training. The Patrouille de France, air demonstration team of the French Air Force, fly the Alpha Jet. 176 production Alpha Jet E machines were delivered up to 1985, not the 200 that had been planned.

The Luftwaffe decided to use the Alpha Jet in the light strike role, preferring to continue flight training in the sunny Southwestern United States on American trainer types instead of performing training in cloudy Germany. The first production German Alpha Jet performed its first flight on 12 April 1978. It was designated the Alpha Jet A (the "A" standing for Appui Tactique or "Tactical Strike") or Alpha Jet Close Support variant. The Luftwaffe obtained 175 machines up to 1983, with the type replacing the Fiat G91R/3. Manufacture of Alpha Jet subassemblies was divided between France and Germany, with plants in each country performing final assembly and checkout. The four prototypes remained in service as testbeds, for example evaluating a composite graphite-epoxy wing and improved Larzac engine variants. 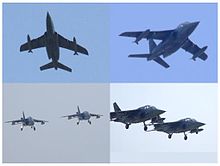 Considerable foreign sales were expected for the Alpha Jet, with the type becoming available before its main rival, the United Kingdom's BAe Hawk. The Hawk ended up winning on sales,[citation needed] but as it was commented:

What Europe must avoid is the kind of wasteful competition that has the Hawker Siddeley Hawk and Dassault-Breguet/Dornier Alpha Jet battling against each other in the world market.

The first major foreign customers were Belgium and Egypt, each performing final assembly of French-configuration Alpha Jet E machines. Belgium ordered 33 aircraft under the designation of Alpha Jet 1B, with assembly by SABCA of Belgium and deliveries in 1978-1980.

The Belgian aircraft have been updated by SABCA to Alpha Jet 1B+ configuration, featuring a laser-gyro inertial navigation system with a GPS receiver, a HUD in the front cockpit and a HUD repeater in the rear, a video recorder and other small improvements. The initial 1B+ was redelivered in 2000 and the Alpha Jets are expected to remain in Belgian service until at least 2015.

Egypt ordered 30 aircraft designated Alpha Jet MS1 in the early 1980s. Four complete aircraft were supplied by Dassault, with the other 26 assembled in Egypt from knockdown kits by AOI.

A number of other nations also obtained the Alpha Jet E, including the Ivory Coast (7 aircraft), Morocco (24), Nigeria (24), Qatar (6 Alpha Jet Cs) and Togo (5). All of these machines were from French production except for the 24 Nigerian aircraft, which were obtained from German production. Pictures of Qatari Alpha Jet E machines show them painted in neat brown-and-sand ripple desert camouflage on top and light blue on the bottom, and also featuring an unusual long spine running from the tailfin up to about midwing. The spine may house additional avionics.

The Luftwaffe began to phase out their Alpha Jet A machines in 1992, reserving 45 for lead-in fighter training. 50 were passed on to Portugal in 1993, replacing the T-38 Talon and Fiat G.91, with five of these used for spares.[2] The rest of the Luftwaffe's Alpha Jets were gradually phased out, with the last leaving service in 1998. In 1999, 25 more were sold to Thailand to replace OV-10 Broncos in the border patrol role, while the British Defence Evaluation and Research Agency obtained 12 as chase planes and flight test platforms. Both the Thais and the British used five of their aircraft for spares.

The Alpha Jets were sold cheaply since they were soaking up funds simply sitting in mothballs, though Fairchild-Dornier got a contract worth US$43 million to refurbish the machines and provide support to the end users. Apparently 32 more, including two spares hulks, were sold to the United Arab Emirates, though details are unclear, and three even ended up in private hands, to be used by the "Flying Bulls" flight demonstration team, which operates out of Austria and flies a range of classic aircraft.

In 1980, work began on an "Alternate Close Support" version of the Alpha Jet, featuring a SAGEM ULISS 81 INS, a Thomson-CSF VE-110 HUD, a TMV630 laser rangefinder in a modified nose and a TRT AHV 9 radio altimeter, with all avionics linked through a digital databus. Initial flight was on 9 April 1982. Cameroon obtained 7 (some sources claim 6)[citation needed] and Egypt obtained 15. As with the original Egyptian order for MS1 machines, Dassault provided four such machines under the designation of MS2 and AOI of Egypt assembled the other eleven from knockdown kits.

An Alpha Jet imported by Abbatare lands at the Mojave Airport

Abbatare Inc. of Arlington, Washington, under the name of "Alpha Jets USA", has begun to import Alpha Jets into the United States and sell them in the civilian market.[3]

There were a number of other Alpha Jet proposals that never reached production: 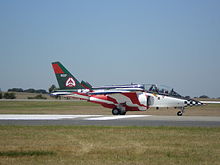 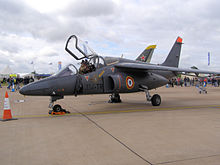 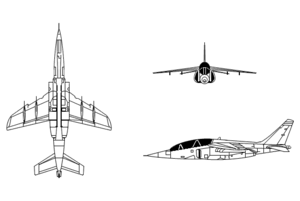 In the French movie titled 'Les Chevaliers du ciel' a simulated dogfight is performed by a Mirage 2000-5 as chaser (attacker) and an Alpha Jet-E trying to escape without the permission to self-defense or any kind of counter-strike except maneuvering.

The initial version of this article was based on a public domain article from Greg Goebel's Vectorsite.