Disneyland Park (French: Parc Disneyland) is a theme park at Disneyland Paris, a resort complex just outside of Paris, in the new town of Marne-la-Vallée, France. The first of two parks built at the resort, it opened as Euro Disneyland on 12 April, 1992. Operated by the French company Euro Disney S.C.A., the park was designed and built by Walt Disney Imagineering and the park's layout and attractions are similar to Disneyland in Anaheim, California and the Magic Kingdom at the Walt Disney World Resort in Orlando, Florida. Occupying 566,560 m² (140 acres), Disneyland Park is the largest Disney park based on the original in California.

In order for the fourth park to be based on the original (in Anaheim, California) modifications were made to the concepts and designs of the park. Amongst these changes was a shift from Tomorrowland to "Discoveryland", giving the area a retrofuturistic theme rather than futuristic. Other elements that were altered include the Haunted Mansion, which was redesigned as Phantom Manor, and Space Mountain. The park's location in Europe brought forth its own challenges. For instance, Le Château de la Belle au Bois Dormant is said by its designers to have been necessarily reevaluated for a continent on which authentic castles stand.[2] Modifications to the park were made to protect against changes in weather in the Parisian climate. Covered walkways were added, though these are described as "Arcades" and not covered walkways, and Michael Eisner ordered the installation of 35 fireplaces in hotels and restaurants.

The park, as well as its surrounding complex, initially failed to meet financial expectations. This resulted in an image change in which the word "Euro" was phased out of several names, including Euro Disneyland.

Disneyland Park has been subject to a number of name changes, initially an effort to overcome the negative publicity that followed the inception of the Euro Disney Resort.

As Americans, the word ‘Euro’ is believed to mean glamorous or exciting. For Europeans it turned out to be a term they associated with business, currency, and commerce. Renaming the park ‘Disneyland Paris’ was a way of identifying it with one of the most romantic and exciting cities in the world.[3]

The park map lists forty-nine attractions in five themed "lands". Designed like a wheel with the hub on Central Plaza before "Le Château de la Belle au Bois Dormant", pathways spoke out across the 140 acres (0.57 km2) of Disneyland Park and lead to these five lands.[4] The Disneyland Railroad runs along the perimeter of the park and stops in Main Street, U.S.A., Frontierland, Fantasyland and Discoveryland. 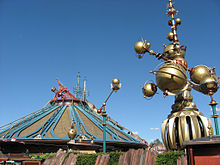 Lots of rides, shows and parades.