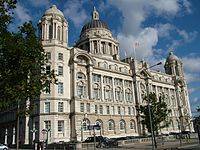 The Port of Liverpool Building at the Pier Head. Former offices of the Mersey Docks and Harbour Company.

The Mersey Docks and Harbour Company (MDHC), formerly the Mersey Docks and Harbour Board (MDHB), owns and administers the dock facilities of the Port of Liverpool, on the River Mersey, England. These include the operation of the enclosed northern dock system that runs from Princes Dock to Seaforth Dock, in the city of Liverpool and the dock facilities built around the Great Float of the Wirral Peninsula, located on the west side of the river.[1]

Peel Ports, the MDHC's parent company, owns other maritime facilities in the area, including the Cammell Laird shipyard, Tranmere Oil Terminal and the Manchester Ship Canal.[1][2]

Liverpool Town Council's Dock Committee was the original port authority.[3][4] In 1709 it had been authorised to construct Liverpool's first enclosed ship basin, the Old Dock, which was the world's first commercial wet dock.[5] By 1750 the old Dock Committee was replaced by the Liverpool Dock Trustees.[6] In order to provide stone for the construction of the expanded dock system, from 1830 the Trustees (and later the MDHB) operated large quarries at Creetown, Scotland.[7]

The Mersey Docks and Harbour Board took over running of Liverpool's docks from the Trustees in 1858. The need for Liverpool Corporation to divest its dock interests to a new public body was as a result of pressure from parliament, dock merchants and some rival port operators.[3][4][6]

At one point the Mersey Docks and Harbour Board railway totalled 104 miles (166 km) of line, with connections to many other railways. A section of the line ran, unsegregated from other road traffic, along the dock road. Today only the Canada Dock Branch is used.

In 1972 the Board was reconstituted as a company to allow it to raise money for new building initiatives and projects, including the new container dock at Seaforth.

The MDHC was accused of "macho management" by the Financial Times regarding its treatment of some its staff, which resulted in Liverpool Dockers' Strike. In recent years the safety record of the MDHC has worsened.[citation needed]

On 22 September 2005 MDHC was acquired by Peel Ports, part of the property and transport group Peel Holdings, which owns a minority stake in Liverpool John Lennon Airport.

Cammell Laird Dock is a dock at Birkenhead, on the Wirral Peninsula. It exits directly onto the River Mersey.

The dock was built as part of an expansion of the Cammell Laird shipyard at the turn of the twentieth century by enclosing what was once Tranmere Pool.[8]

Following the closure of the original Cammell Laird shipyard in 1993, the dock and the four remaining dry docks at the site are owned by the MDHC. All were subsequently leased, firstly to the A&P Group and then to Northwestern Shiprepairers & Shipbuilders, which officially renamed itself Cammell Laird Shiprepairers and Shipbuilders Ltd on 17 November 2008.[9]

Other Port operators in the UK include: